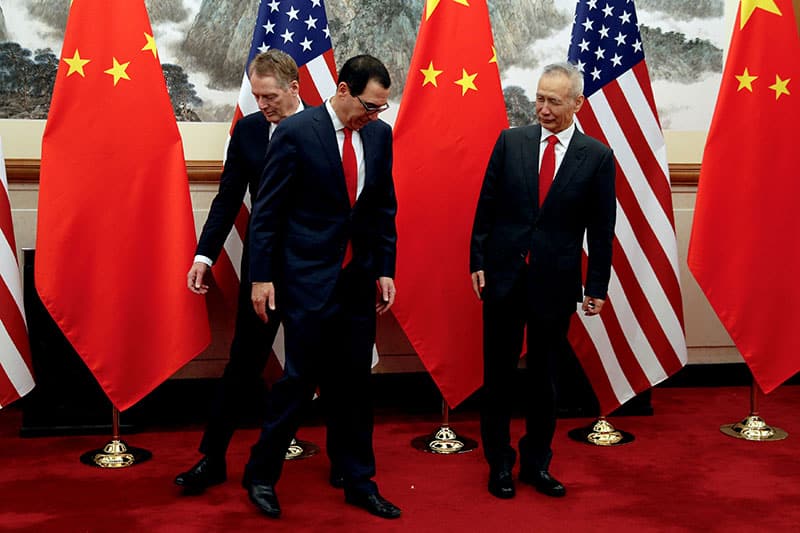 FILE PHOTO: Chinese Vice Premier Liu He, right, looks as U.S. Treasury Secretary Steven Mnuchin, center, swaps places with his Trade Representative Robert Lighthizer during a photograph session before they proceed to their meeting at the Diaoyutai State Guesthouse in Beijing, Wednesday, May 1, 2019. Andy Wong/Pool via REUTERS - RC168CE312A0/File Photo

BEIJING, May 9 (Reuters) – China is fully prepared to defend its interests in its trade war with the United States, but hopes the United States can resolve problems through dialogue instead of unilateral steps, the Chinese commerce ministry said on Thursday.

China has the determination and capacity to defend its interests, but hopes the U.S. can meet it halfway, Gao Feng, the ministry’s spokesman, told reporters.

Vice Premier Liu He is heading a delegation set to hold talks with U.S. counterparts in Washington on Thursday and Friday aimed at salvaging a deal, after President Donald Trump threatened to hike tariffs on Chinese goods on Friday.

China opposes unilaterally imposed tariffs, and will not succumb to any pressure, Gao said.

These include chemicals, building materials, furniture and some consumer electronics.

The U.S. tariff action would come in the middle of meetings between Liu and Trump’s top trade officials in Washington. Expectations were recently riding high for a deal to be reached, but a deep rift opened up last weekend over the language of the proposed pact.

Reaching a deal requires effort from both sides, Gao said, adding that China had demonstrated its sincerity in the ultimate form by sending its trade delegation to the U.S. despite Washington’s tariff threats.

The world’s two largest economies have been embroiled in a tit-for-tat tariff war since July 2018 over U.S. demands that the Asian powerhouse adopt policy changes that would, among other things, better protect American intellectual property and make China’s market more accessible to U.S. companies.

Trump also threatened on Sunday to levy tariffs on an additional $325 billion of China’s goods, on top of the $250 billion of its products already hit by import taxes.

Liverpool to lift replica if they win Premier League