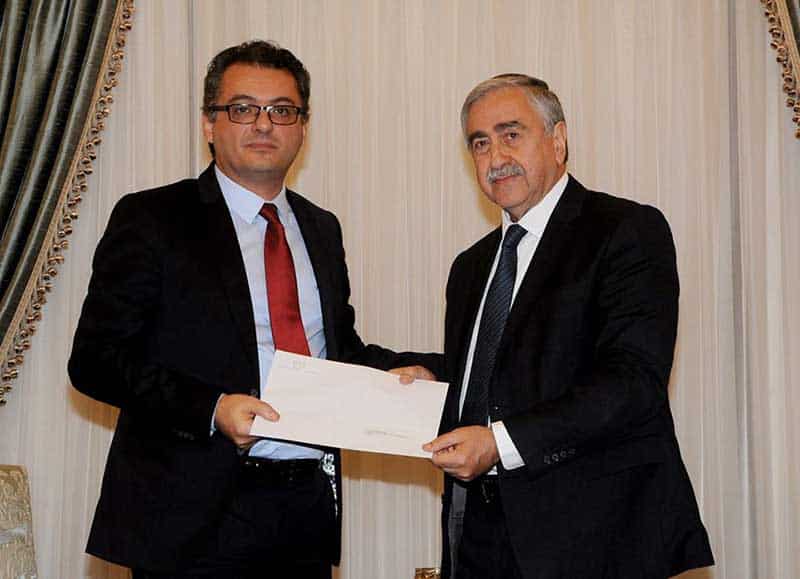 The four-party coalition ‘government’ in the north officially collapsed on Thursday after ‘Prime Minister’ Tufan Erhurman handed in his resignation to leader Mustafa Akinci following a rift between the partners over the lease of ‘state’ land to the son of Serdar Denktash.

Erhurman’s resignation followed those of two of his coalition partners, the head of the People’s Party (HP) Kudret Ozersay who was Deputy ‘Prime Minister’ and ‘Minister of Foreign Affairs’ and head of the Democratic Party Serdar Denktash who was ‘Finance Minister’.

The other two parties forming the coalition were Erhurman’s Republican Turkish Party (CTP) and the Communal Democracy Party (TDP) headed by Cemal Ozyigit who was ‘Minister of Education’.

Accepting Erhurman’s resignation, Akinci said that he believed that he had worked in harmony and dialogue with the four-party coalition.

He added he would give a few days to the parties to consult among themselves, while he will hold separate meetings next week with the heads of ‘parliamentary’ parties and would assign one of them to form a ‘government’ that could secure a vote of confidence in ‘parliament’.

Pointing out that this was the first four-party coalition in the north, Akinci said that Erhurman’s job had not been easy. He said he asked Erhurman to remain in ‘office’ until a new ‘government’ was formed.

Denktash resigned on Wednesday afternoon following reaction by his coalition partners after it emerged his ‘ministry’ leased his son ‘state’ land for 10 years for the construction of a university that would bear the name of former Turkish Cypriot leader, the late Rauf Denktash, father of the DP party leader.

Ozersay, who had requested cancellation of the lease agreement in question, resigned late on Wednesday citing a confidence crisis among the coalition partners.

Erhurman said that the most appropriate thing would be for Akinci to assign to the  party with the largest number of seats in ‘parliament’ to form a ‘government’ and this would be UBP leader Ersin Tatar.

The leader of main opposition National Unity Party (UBP) Ersin Tatar said on Wednesday his party was ready for talks with HP.

Noting that the two parties would jointly have 30 ‘deputies’ in ‘parliament’, Tatar argued that they did not have ideological differences, especially on the Cyprus Problem.

Ozersay said his party members would decide on whether they would continue as an opposition party or proceed with negotiations to form a ‘government’.

According to media reports in the north, Erhurman said that it was important to form a new ‘government’ as soon as possible due to the economic crisis the regime was currently facing.

“It is important to have a stable ‘government’ during times like these. I would like to wish the new ‘government’ all the best because we are truly going through a difficult time,” he said.

He refrained from commenting on possible government scenarios, adding that the issue will be discussed in detail during a party meeting on Thursday evening.

On whether early elections were on the horizon, Erhurman said that there was the necessary arithmetic in parliament for alternative coalition scenarios but as the ‘constitution’ states, early elections will be held if coalition talks fail.

Turkish Cypriot daily Yeni Duzen, citing the short lifespan of administrations in the north, reported that there have been 34 ‘governments’ in 36 years.

The four parties that command 27 of the 50 seats in ‘parliament’ formed a coalition ‘government’ in February 2018 following early elections. UBP took first place at those elections but failed to win a majority and found itself outside the ‘government’ after failing to forge a coalition with other parties.