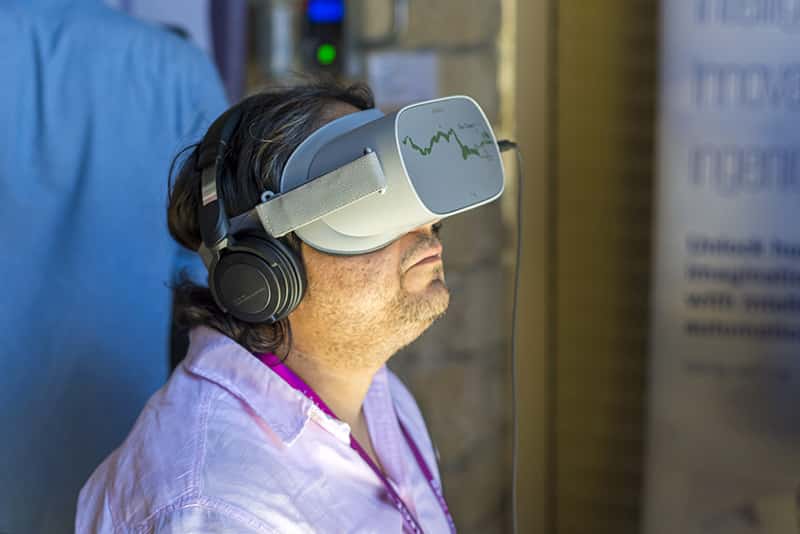 Artificial intelligence (AI) is not just coming, it’s already here around 1,000 attendees at the Reflect Festival, the largest two-day future casting festival between Southern Europe and the Middle East, heard on Thursday at the opening in Limassol.

Organised by 0100 Conferences, the attendees included entrepreneurs, managers, innovators, students, and future enthusiasts who went to listen to more than 50 speakers.

Sophia, Hanson Robotics’ most advanced human-like robot, is also at the festival.

Other highlights include Founder & CEO of Jungle Creations, a media company whose video content is distributed to over 85 million followers; the Head of AI Innovation and Strategy at Adobe, best known for spear-heading Adobe’s Creative Cloud strategic development partnerships; the co-founder & CEO of Virtual Everything, and a member of this year’s Forbes 30 under 30; and the CEO and co-founder of AeroMobil – the advanced engineering company which is currently commercialising the flying car.

It is a fact, they said, that AI would cost millions of jobs, but  also said that jobs that do not exist today will be created tomorrow as a result of the rapidly changing world.
Changes that AI will bring may cause people to fear to some extent, but they also constituted challenges for everyone. The speakers said investment would be needed in education to prepare children now and give them new skills.

Companies that do not adapt will stay behind, was the message. Apart from skills in technology, companies and their employees need to show creativity, service orientation and emotional intelligence in order to have an advantage in the current and coming era.

At least for the next years, AI will not have creativity or show sympathy, but emotional AI will be taught, making AI able to read emotions and react accordingly.

The festival is being organised by young Cypriots Stylianos Lambrou and Andria Lambrou and Slovak Dusan Duffek.

Lambrou said the Festival, which is five times bigger than the first one they organised last year, aims to promote Cyprus as a destination for investments in the fields of technology and innovation.

“From business people to the big organisations, this is a fantastic opportunity to network and learn more about developments in tech. Trendsetters, decision-makers, and pioneers of our time will be challenging the status quo of our current age and presenting the future of AI, health and wellbeing, philosophy and mindset, cities, travel️, art and design, money and impact,” she said

Other topics at the festival included the changing world of business, innovation in health tech, new players in mobility, and climate change.

Also part of the festival was an event dedicated to venture capital with a focus on Cyprus, also organised by 0100 Conferences.

Three panel discussions on Cyprus as a destination for capital and talent, on investment in technology and on fundraising covered the main challenges and opportunities that venture capital and angel investors encounter.

In his keynote speech, the Minister of Energy, Commerce, and Industry Yiorgos Lakkotrypis stressed the need to maintain the momentum achieved and face the challenges that big tech poses for the Cyprus economy.

“Many changes have occurred in retail, logistics and manufacturing, with artificial intelligence potentially threatening jobs through automation”, he explained.

He added that Cyprus should harness technology to modernise logistics and optimise its status as a trading platform.

The panelists unanimously agreed that it was essential to attract the brains, the skilled tech workforce needed in Cyprus. In this regard, the role of Cyprus universities is central, and they have been recently allowed to set up and operate spin-offs that could attract major investments.

Structuring a fund and raising capital is trouble-free in Cyprus, but the banks are not on par, some speakers noted.

Venture Capital funds would feel more comfortable if they could use global banks, such as Credit Suisse or Barclays that would sub-contract depositary services to Cyprus banks, which helps build confidence on the investor side.

Cyprus Investment Funds Association (CIFA) President Angelos Gregoriades noted that investment in entrepreneurship was not new in Cyprus, referring to the work done by the Cyprus Development Bank before the growth of start-ups on the island.

The EU has already unlocked considerable funds to this end. However, as the panelists noted, it all happened through banks and not Venture Capital funds, which is considered to be the best vehicle for supporting the sector.