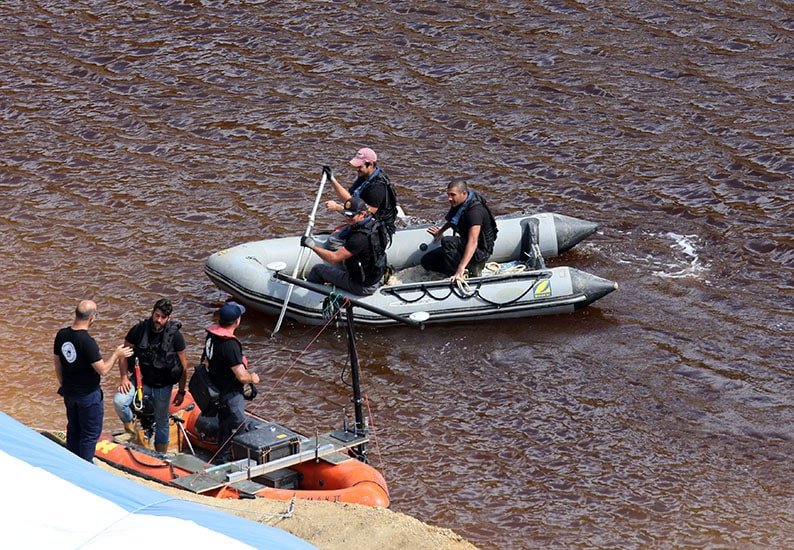 Salvage crews on Thursday continued scouring two lakes where it is believed a confessed serial killer disposed of his victims’ bodies, but came up short at both sites.

Searches are ongoing at two lakes – the ‘red lake’ at Mitsero and lake Memi near the Xyliatos reservoir. The latter is some 15 minutes’ drive from a mine shaft at Mitsero from where authorities previously recovered two bodies, one of whom belonging to Mary Rose Tiburcio, a 39-year-old Filipina.

The focus at lake Memi is on locating the body of Tiburcio’s daughter, six-year-old Sierra Graze Seucalliuc. It is believed her body is not inside an object like a suitcase.

Police said that Nicos Metaxas, a 35-year-old National Guard officer has confessed to the killing of the mother and daughter last year. The two were reported missing in May 2018.

On Thursday divers failed to find anything at lake Memi. Likewise at the red lake, where salvage crews are currently tasked by police with locating a third suitcase which may contain a body.

A new sonar sweep in the afternoon identified more targets, which will be searched on Friday.

To date, the search has focused on the east side of the red lake, where most debris is concentrated due to prevailing currents.

Once the east side is covered, crews would turn their attention to the west side.

The red lake’s total volume is an estimated one million cubic meters.

For their part, the police said the overall criminal investigation continued but would not speculate whether there were other victims besides the seven Metaxas allegedly confessed to.

When asked if there were any signs that the number could rise, spokesman Andreas Angelides said: “there is nothing that changes the current circumstances of the case.”

Angelides said it was reasonable to ask whether there were more victims, adding “the aim is to investigate all the aspects of this case.”

Questions as to the potential number of victims became more pressing after a report in daily Politis about a suitcase seen by a restaurateur in a waste bin in Nicosia last February. The woman said Metaxas had visited her restaurant in the Dhali area with a group of friends sometime in April but even after the first victim was found she had thought nothing of it.

As the investigation progressed, the woman realised he was the man who ate at her restaurant and then she remembered the suitcase in the bin. The restaurateur said she had tried to lift it but it was extremely heavy and she left it there until the contents were emptied by the garbage collectors and taken to the landfill.

Angelides said police have received the information and were in the process of evaluating it to decide whether to launch searches in other venues.

Also on Thursday the independent police watchdog appointed three criminal investigators to probe possible shortcomings in the handling of the disappearances of women who turned out to be the victims of a serial killer.

The case has led to the resignation of Justice Minister Ionas Nicolaou and the dismissal of the chief of police Zacharias Chrysostomou, as reports suggested earlier investigations into the disappearances of the women were deficient.

The force is already carrying out its own internal probes into the perceived shortcomings.

A self-confessed serial killer has claimed seven victims so far, five women and two children, the daughters of two of the women.

Authorities have recovered five bodies and are still searching for two in two lakes near Mitsero.

EU nations are living far beyond the Earth’s means