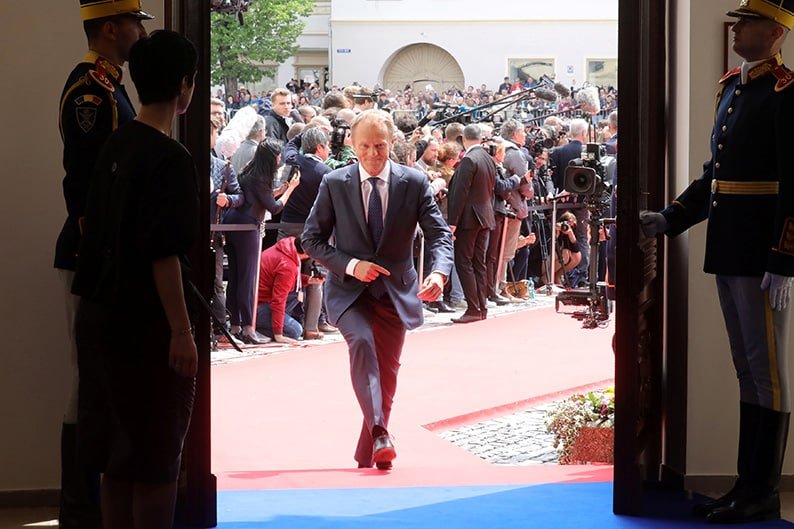 The European Union stands with Cyprus in its dispute with Turkey over offshore drilling operations, European Council President Donald Tusk said on Thursday.

“The EU stands united behind Cyprus and expects Turkey to respect the sovereign rights of EU member states,” Tusk told a news conference after president Nicos Anastasiades addressed fellow EU leaders on the matter during talks in Sibiu, Romania.

“The European Council will continue to follow this development closely,” he added.

Walking into the informal Council meeting, Juncker was asked how the bloc ought to deal with Turkish actions in the island’s exclusive economic zone (EEZ).

“I am a Cypriot,” he replied, hinting at EU solidarity with Cyprus.

After the summit, Anastasiades said Cyprus’ EU partners responded positively to his speech, and that this would be reflected in a statement by the President of the European Council.

He said no decisions would be made on Thursday since the summit in Sibiu was an informal one, but if Turkey continued to violate international law “there would be decisions in time.”

Unnamed Greek diplomatic sources told the Cyprus News Agency that steps being contemplated include sanctions on individuals or companies involved with Turkey’s incursion into Cyprus’ EEZ.

Speaking to Euronews, Anastasiades said “the European Council will monitor the issue of the Turkish provocation in the Cypriot EEZ either on May 28 when we will have the extraordinary Council or in the June regular Council and decisions will be taken accordingly.”

Anastasiades cited examples on when the EU imposed sanctions on third countries for violations of international law, and pointed out Turkey’s failure to meet its obligations as a candidate country toward an EU member state “demonstrating disrespect […] not only to the member state but also Europe itself.”

The president said he pointed out to his counterparts that actions and not words were needed with Turkey.

Greek Prime Minister Alexis Tsipras, asked whether sanctions should be imposed on Turkey or if diplomacy should prevail, said diplomacy comes first.

EU Commissioner for Migration, Home Affairs and Citizenship Dimitris Avramopoulos said that Europe had sent clear messages to Turkey but has not yet come to consider measures over Ankara’s illegal drilling in Cyprus’ exclusive economic zone (EEZ).

Replying to questions at a news conference with Disy leader Averof Neophytou, Avramopoulos expressed the hope that any measures would be avoided and that prudence and logic would prevail.

“Europe has sent clear messages, but we have not yet reached the point of looking at measures … I want to believe that measures will be avoided and that prudence, logic and the spirit of the time will prevail,” he said.

He stressed that the key to Turkey`s European perspective was to resolve the Cyprus problem in general and to settle the issues that have arisen.

He explained that Europe`s relations with Turkey were very much defined by how things were evolving in Cyprus, adding that the position of Europe as it was expressed by the President of the Commission and all the institutions, including the European Parliament, was clear. He added that the issue should be addressed through, multilateral diplomacy guided by the international and the EU law.

He added that Turkey aspires to join the European family and the door was not closed. He stressed however that Turkey “holds the key and it has to prove in practice how it understands relations, with the Republic of Cyprus, an EU member-state”.

Anastasiades had also informed the heads of parties who are members of the European People’s Party (EPP) whose summit also took place in Sibiu, ahead of the Council meeting.

The president raised the issue of restrictive measures “against all those involved in Turkey’s unlawful actions” in the Republic of Cyprus’ EEZ and the Eastern Mediterranean.

“The time has come for a collective response to these challenges with actions beyond the usual messages that have proven ineffective,” he said addressing the EPP summit.

It is clear, he noted, that all of the EU’s rigorous messages to Turkey have hit a wall.

“Even the recent statement by EU High Representative (Federica) Mogherini has been met with contempt by the Turkish foreign minister,” he said.

The ultimate goal of the measures should be “to end Turkey’s unlawful actions that are likely to further destabilise the region.”

“It is by far the most serious violation of the sovereign rights of Cyprus and we are faced with an unprecedented escalation of Turkey’s unlawful actions in the Eastern Mediterranean,” he said.

The EPP said it strongly condemned the recent Turkish drilling activities within the EEZ arguing that this was “a grave violation of Cyprus’ sovereignty and works against EU’s interests”.

Earlier in the day, Britain said it was concerned by Turkey’s intention to begin offshore drilling operations in an area claimed by Cyprus as its exclusive economic zone, Foreign Secretary Jeremy Hunt said.

“This situation must be deescalated and all parties show restraint,” he said. “Hydrocarbons development should benefit all Cypriots and support a settlement.”

The dispute between Cyprus and Turkey began last Friday when Turkish authorities issued a marine advisory notifying that its drillship, the Fatih, would be carrying out ‘drilling operations’ in an area west of the island from May 3 to September 3.

The drillship remains stationary some 60 kilometres off Paphos. As far as is known, actually drilling operations have not commenced.

Macron says Europe must renew itself or fall