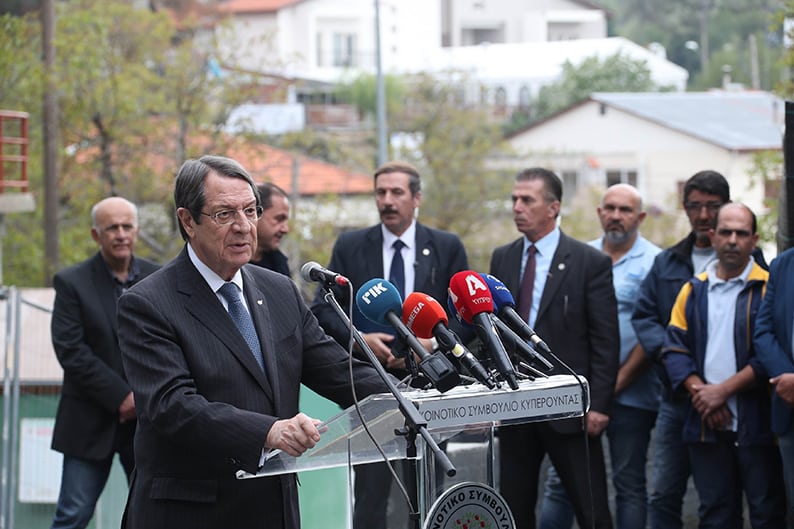 There will most likely be teething problems when the national health scheme (Gesy) kicks in but these should prompt a bigger push to make it a success, President Nicos Anastasiades said on Friday.

Speaking at Kyperounda where he went to lay the cornerstone of the local hospital’s pulmonary clinic, Anastasiades said more than 280,000 people had registered in Gesy’s system so far.

This, he said, was proof of the “acceptance of the reform we have adopted.”

The president said that most probably there would be problems after the launch of “a revolutionary reform” such as Gesy.

“But this should not get anyone down. On the contrary, it ought to make everyone prevail even more,” he said.

According to the law, the state will be able to intervene where problems are presented to make the necessary corrections “so that we can achieve the best possible implementation of the scheme.”

The first phase of Gesy, which is the introduction of outpatient care will be launched on June 1.

On Friday the House plenum unanimously approved the five last regulations concerning labs and pharmacists who will offer their services under Gesy, their pay and their registration process in Gesy. They also amended the law to include provisions that facilitate the execution of electronic prescriptions that concern controlled drugs.

Meanwhile, the health ministry and the Health Insurance Organisation are mulling over incentives for private hospitals to encourage them join Gesy. The proposal will be reportedly presented to the private hospitals’ association within the coming days.

The majority of private hospitals said they will not join Gesy, citing uncertainty after the HIO failed to respond to a number of questions they had put forward concerning assurances that quality health services to patients could continue.

The group had said that the success of every national health scheme lies in proper planning and ensuring viable participation terms for healthcare providers, “something which, unfortunately, does not apply for Gesy, thus creating great uncertainty and concern to society over its implementation.”

As a result, Pasin announced last month that 14 of its members that have decided not to join Gesy are now part of the private medicine network.

Parliament wants to be more people-centric