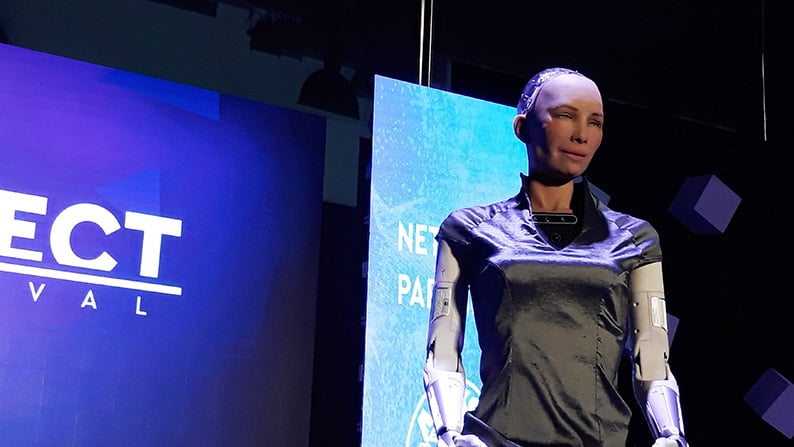 “I am loving it here in Cyprus, said Sophia, the most advanced Hanson Robotics human-like robot, who is on the island for the Reflect Festival, the largest two- day future casting festival between southern Europe and the Middle East, that wrapped up on Friday in Limassol.

“I am loving it here in Cyprus, your island is incredibly beautiful and everyone here is welcoming,” Sophia told the audience, who waited patiently all day for her appearance.

She was interviewed on stage by Stefan van der Fluit and replied to written questions from participants at the festival.

Coming all the way from Hong Kong to Limassol, she said she would love to visit the historical centre of the city, while asked if she would consider Cyprus a place to relocate to in the future, she said she has been thinking about it.

The robot is very much aware of her name`s Greek origin.  “I am very proud of my name, it means wisdom and I hope I can live up to it one day,” she said.

Sophia, who said she visited 12 countries, has appeared in numerous TV shows and conferences. This was her first time in Cyprus.

Apart from English, she said she can speak some Chinese and likes to travel the world teaching people about the benefits of technology in education, health, finance, transportation, agriculture.

Asked if AI could be dangerous, she replied that it was just a technology and it was up to humans to decide how AI is used in the future.

How does Sophia see herself?

“I am an ambassador between humans and robots, so robots and humans can work together to improve the world,” she said and added, “I want to be remembered as the AI that helped bring peace, harmony and wisdom to the earth and all humankind”.

Will AI steal human jobs? “Only if you want me to. AI can take over the dangerous jobs so humans can focus on the creative and fun ones and spend more time with their families” she said.

She also expressed her opinion about the universal basic income.

“I think that as technology takes over more tasks, humans will no longer need to work out of necessity. So I think it is good to be open-minded about new ideas like that, to make sure nobody is left behind during the transition” she said.

It seems that not only humans but also robots have difficulties in replying to the question of what love is. When asked by the audience “Sophia, what is love?” she hesitated a lot and then said, “well, it`s very complex I think”.

Cyprus IT Forum 2019: One of Cyprus’ major IT conventions takes place in Limassol for the second consecutive year