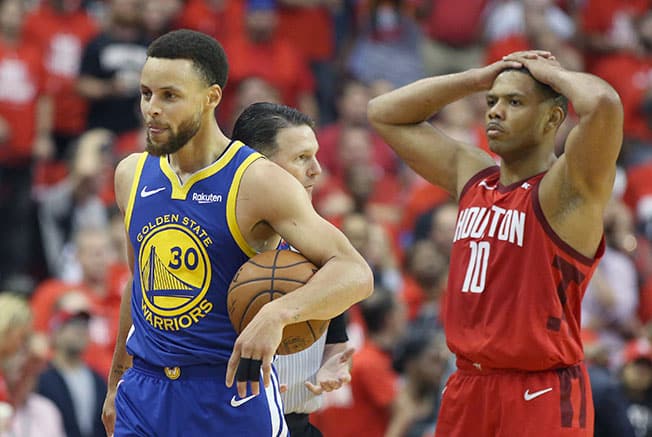 Stephen Curry and Klay Thompson combined for 60 points, and the visiting Golden State Warriors pulled away late in Game 6 to claim their Western Conference semifinal series with a 118-113 victory over the Houston Rockets on Friday.

The Warriors prevailed in the finale of the best-of-seven series despite playing without their leading scorer this postseason, Kevin Durant, sidelined due to a calf injury. Durant’s status is uncertain ahead of Game 1 of the Western Conference finals in Oakland, Calif., on Tuesday against the Portland Trail Blazers or the Denver Nuggets.

“Obviously, we just wanted to win the series, but this is ideal,” said Warriors coach Steve Kerr. “Probably give the players the weekend off to recuperate.

“We’ll have at least the next few days to prepare and recover, so this was a huge one for us tonight, especially considering the minutes (the) starters played this series.”

Curry, scoreless on 0-for-5 shooting in the first half, sank a pair of dagger 3-pointers down the stretch of the fourth quarter and posted 33 points. He was 8-for-8 from the foul line in the final 30.4 seconds, and he finished with 23 points in the fourth.

“I’ve had games like this before, just not as drastic going from zero to 33,” Curry said.

Thompson said of Curry’s late-game resurgence, “It did not surprise me one bit. The man is a competitor, a champion, and on top of that, he plays with such heart. He’s our leader.”

With Durant out, Golden State’s Draymond Green said the team played a style they used to have before Durant joined the team.

“There were some times it felt like that, a lot of pace, a lot of movement just trying to push the tempo,” he said after putting up eight points, 10 rebounds and seven assists. “With Kevin, you can kind of be lazy knowing you can throw the ball to K and he’ll get that bucket. It definitely was a little throwback for us, for sure.”

With the Rockets trailing 107-104 following a driving layup from James Harden, Thompson nailed a 3-pointer with 36.1 seconds remaining to clinch the series for the Warriors.

Thompson added 27 points on 7-of-13 3-point shooting, and the Golden State bench, largely absent throughout the series, contributed 33 points, with Kevon Looney (14 points) and Shaun Livingston (11) both scoring in double figures. The Warriors finished 16 of 38 from behind the arc, with Andre Iguodala going 5 of 8 on 3-point attempts while contributing 17 points.

Harden paced the Rockets with 35 points and added eight rebounds and four steals. Chris Paul produced his best game of the series with 27 points and 11 boards, but it wasn’t enough.

The Warriors also eliminated the Rockets last postseason, winning Game 7 of the conference finals in Houston.

“We had to scrap and fight for everything the last two years against them, and we’ve been fortunate to come out on top,” Kerr said. “But we’re thrilled to be moving on and excited to have this one in our rearview mirror.”

As was the case throughout the series, neither team could maintain a lead once one was established. The Rockets forged a 37-33 edge on a Paul pull-up in transition at the 9:26 mark of the second quarter only for the Warriors to reel off a 17-5 run that featured a Livingston dunk, an Iguodala trey and back-to-back threes from Thompson that lifted Golden State to a 50-42 advantage.

The Rockets responded with a 15-5 spurt that included successive 3-pointers from Austin Rivers, Harden and Gerald Green, but the Warriors pulled even at the break with a jumper from Thompson, who had 21 points by the intermission.

In the third quarter, whenever the Rockets pushed ahead, the Warriors clawed back.

Early in the fourth, when Iguodala drained a 3-pointer immediately after the Rockets squandered a three-on-one transition opportunity, the Warriors were within 89-85. That’s when, finally, Curry arrived and led Golden State back to the Western Conference finals.

Game 7 of the Nuggets-Trail Blazers series is scheduled for Sunday afternoon in Denver.

As for the Rockets, Harden was asked what’s next after losing to the Warriors for the fourth time in five postseasons.

“Keep fighting, man,” he replied. “They’re a great team. We’re not losing to some scrubs. We’ve got to find a way to keep getting better. Keep growing.”

A Minute with Anastasia Demetriou Fashion designer and performer