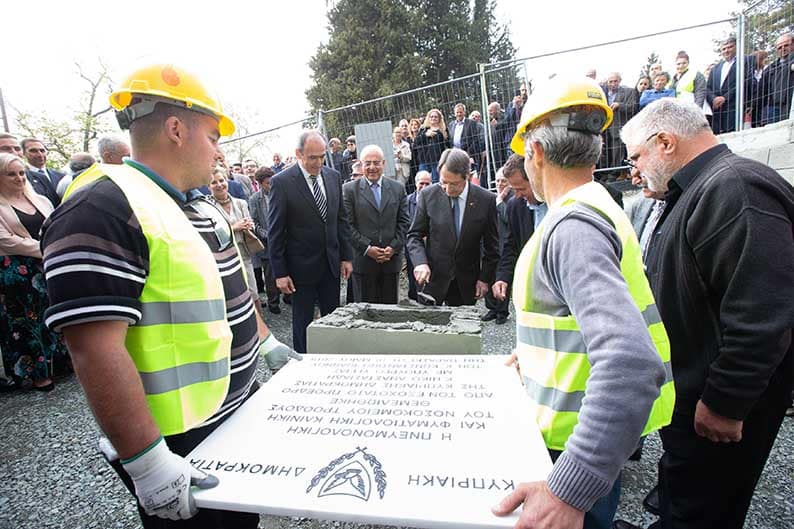 President Nicos Anastasiades lays the cornerstone at the Kyperounda hospital

THE government will offer free bus transfers from the Kyperounda hospital to that of Limassol for dialysis patients until the mountain village gets its own unit, President Nicos Anastasiades said.

He was at the village to lay the cornerstone for the new pulmonary clinic and the accident and emergency department of the Kyperounda hospital. He also inaugurated the citizen’s service centre of the postal services (KEPO) in nearby Kakopetria.

The president said that following the demand of patients of the Troodos area, the government will set up a dialysis unit at the Kyperounda hospital which however will take some time.

In the meantime, the government will offer free buses to transfer dialysis patients from Kyperounda hospital to Limassol.

“This is a transitional adjustment. We want to support as much as possible residents of mountainous areas,” Anastasiades said.

The president the hospital’s first aid department was also to be upgraded, while the overall revamp of its infrastructure is expected to be completed within the year.

The €6.8m project, he said, “satisfies a standing demand of the residents of the wider area.” The government had announced it would build a pulmonary clinic at the hospital more than three years ago.

This, he said, would be a model clinic that would attract patients from abroad due to the area’s climate. He recalled that a similar clinic used to operate there in the past.

“It was the so-called sanatorium during the British rule, because the climate allowed the cure of those suffering from tuberculosis,” he said.

The new clinic and A&E department will increase the efficiency of the hospital to the benefit of the community and of the wider Troodos area and help decongest the Limassol hospital and provide faster service to patients, the president said.

It was also part of the clustering of the rural health centres of Kyperounda, Evrychou, Agros and Platres with expansion of their working hours and turning the Kyperounda hospital to a periphery hospital for the Troodos area.

“The operation of the clinic that will offer specialised treatment and other medical services contributes greatly to efforts to promote Cyprus as a regional healthcare centre,” Anastasiades said.

During the inauguration of the KEPO, Anastasiades said that the government’s aim was the holistic development of the Troodos area through strategic planning which is being gradually implemented.

The postal services’ citizen centres effectively respond to the public’s needs by making procedures for access to public services simpler and by reducing red tape, he said.

KEPOs served more than 157,000 people last year, he said, adding that the aim was to expand this service to other communities and areas.

“I believe that the project we are launching today, the development projects that have been carried out, as well as a number of others that are being launched both within the community and in the wider Troodos region, will give real impetus to sustainable development, job creation, entrepreneurship and attract more visitor, and improve the quality of life of local residents,” he said.

Our View: Will the real ‘Cyprus breakfast’ please stand up?