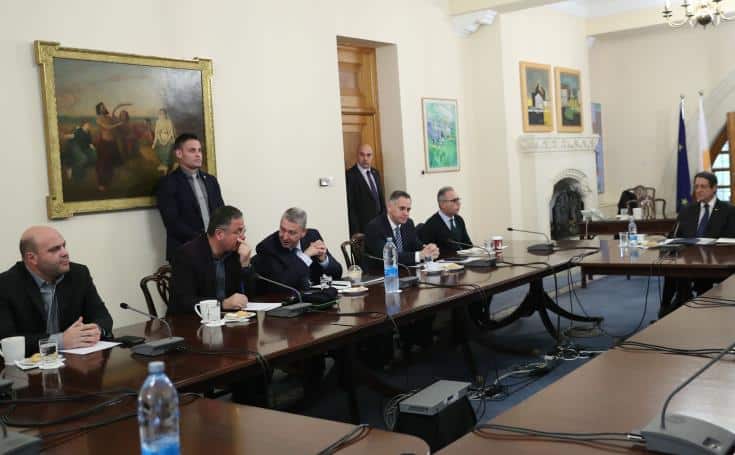 Turkey`s provocations in Cyprus’ Exclusive Economic Zone (EEZ) will be discussed during a meeting on Saturday of the National Council convened by President Nicos Anastasiades. The political leaders will also exchange views on the resumption of the peace talks for the solution of the Cyprus problem.

On Friday Anastasiades underlined the positive response of European partners at the informal European Council, in Sibiu, Romania, to what he had to say with regard to Turkey’s drilling activity.

He highlighted the positive response of Cyprus’ EU partners to his complaints even though they suggested no concerted action.

“No immediate measures are decided during an Informal Council, which convened for another reason, and perhaps we should not expect something similar to happen on May 28. It will be after the elections,” Anastasiades said.

Ankara issued recently a navigational telex, announcing its intention to start drilling off Cyprus until September 3. The Turkish drill ship Fatih, accompanied by three service ships, is located almost 40 nautical miles west of the Akamas peninsula and 83 nautical miles from the Turkish coast. The area falls within the EEZ and continental shelf of the Republic of Cyprus.

President Anastasiades addressed his EU counterparts in Sibiu on the matter, with Council President Donald Tusk saying that “the EU stands united behind Cyprus and expects Turkey to respect the sovereign rights of EU member states.”

Foreign Minister Nikos Christodoulides on Monday will brief his EU counterparts on Turkey`s activities in Cyprus’ EEZ during the Foreign Affairs Council meeting that will take place in Brussels.