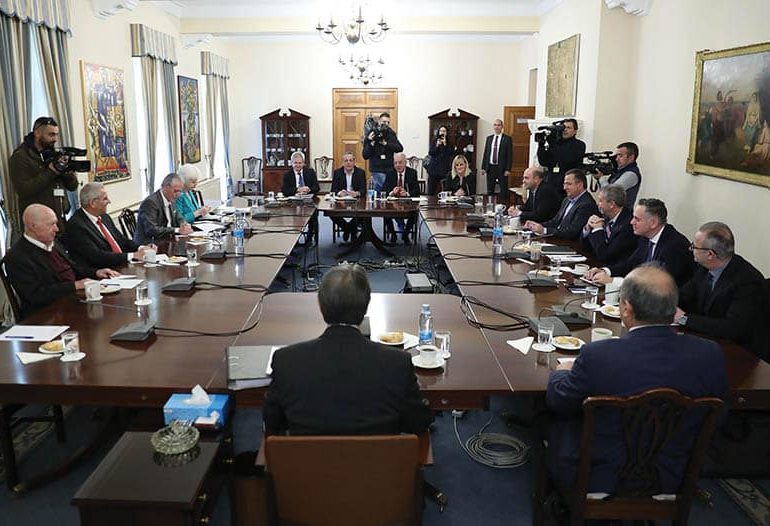 The National Council on Saturday unanimously condemned the “flagrant violation” of Cyprus’ sovereign rights and called on Turkey to immediately cease its threats of violence and all its actions within the Republic’s exclusive economic zone (EEZ).

“The National Council unanimously condemned the flagrant violation of the Republic of Cyprus’ sovereign rights through the illegal activities in the Cypriot EEZ and all other illegal activities that violate the sovereignty and territorial integrity of the RoC, an EU member-state,” government spokesman Prodromos Prodromou said in a statement read out after the meeting at the presidential palace lasting around  three hours.

“It urgently calls for the immediate end to all Turkish acts and threats of violence, in order to reduce tension and for respect of peace and security in the Eastern Mediterranean,” the statement said.

It also highlighted the importance of EU and international solidarity and reaffirmed the National Council’s commitment to the peaceful solution of the Cyprus problem through the UN procedures.

“Turkish actions are undermining and hampering these efforts,” the statement said.

The National Council stressed that without an end to Turkey’s actions there could be no prospect of continuing efforts to resume the process of resuming talks.

During the meeting, Anastasiades briefed the National Council on Turkey’s incursion into Cyprus’ EEZ, while political leaders expressed their views on the resumption of the peace talks.

On Friday Anastasiades underlined the positive response this week of European partners at the informal European Council, in Sibiu, Romania, to what he had to say with regard to Turkey’s drilling activity.

He highlighted the positive response of Cyprus’ EU partners to his complaints even though they suggested no concerted action.

Parliament on Friday condemned Turkey’s actions inside the island’s EEZ  and demanded measures from the international community and the EU that would have tangible consequences for Ankara.

Meanwhile, Turkish President Recep Tayyip Erdogan said on Friday evening that stability in Cyprus and the Eastern Mediterranean is only possible by protecting the rights and interests of Turkey and of the Turkish Cypriots.

During the Iftar (the first dinner after Ramadan’s fasting) the Turkish ruling party AKP hosted for the diplomatic community in Ankara, Erdogan said that his government was working for peace and security in the Eastern Mediterranean.

“I believe that all the parties concerned have seen that we will not turn a blind eye to the faits accomplis that are being attempted in this region,” he said.

Turkey, he said, wanted to solve this issue through meetings, dialogue and cooperation.

Turkish Cypriot leader Mustafa Akinci said earlier in the week the Greek Cypriot side did not want to share natural gas with the Turkish Cypriots and was the reason for increased tension in the Mediterranean.

In statements to Turkish TRT state television, Akinci said that Turkey had the right to carry out explorations for natural gas in its own continental shelf.  He added that the promises given to the Turkish Cypriots were not kept while the Greek Cypriot side has closed completely the issue of sharing the hydrocarbon resources encouraged by the international community.

Man detained in case of smuggling 25.3kg of cannabis

Valencia thanks Man Utd as he prepares to leave the club