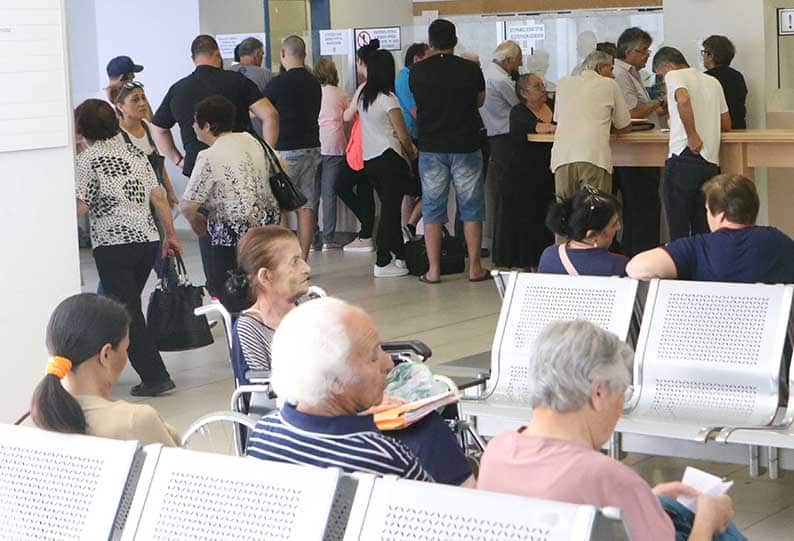 The minister’s statements demand a response.

Quote: Health Minister Constantinos Ioannou on Tuesday called the mass registration of the public for Gesy a “touching response” to what he described as “the greatest social project of at least the last five years”.

Can he please name any other ‘touching response’?

Quote: Presenting the work of the health ministry for March-April, Ioannou said that by late afternoon on Monday, over 220,000 people had registered for Gesy “refuting the claims of all those who in recent months expected that Gesy would launch unsuccessfully”.

That’s barely one quarter of the population of the Republic; hardly a raging success!

Quote: There are 323 GPs so far within Gesy, Ioannou noted…

Dividing 323 GPs into a population of 750,000 over 15-year-olds equals 2322 patients per GP, when each GP is permitted 2,500 patients upper limit. So we already have a surfeit of GPs, given that many with private healthcare providers will not register.

Quote: So far, a number of private hospitals, clinics and polyclinics in the Nicosia, Limassol and Paphos districts have said they intend to participate in Gesy, though the Larnaca and Famagusta districts remain a source of concern.

The six major private sector hospitals of the Republic have refused to join Gesy, which in reality have thus far only succeeded in interesting under worked ‘small fry’.

Quote: Ioannou announced the opening of hundreds of job vacancies, while a subsidy scheme is also being drafted for the purchase of medical equipment from private hospitals.

What kind of job vacancies, administration or medical? And why a subsidy scheme to buy (second hand) medical equipment from private hospitals and not new from manufacturers?

I have just returned home after visiting the Nicosia medical centre on Nehru Street, a prefabricated colonial shack in serious need of restoration, where I was confronted by conditions redolent of a third world country.

The waiting area was packed, all 50 odd seats taken and many other elderly and infirm people obliged to stand awaiting their turn to register to see a doctor.

The inauguration of Gesy is causing considerable concern to the elderly and many were there to stock up with medications from the centre’s pharmacy prior to the termination of the 50 cent public pharmacy service after May 31 – a decision that benefits private sector pharmacies and the HIO/OAY (Health Insurance Organisation) at the expense of citizens. Others were there to register with Gesy in person.

Gesy has failed to offer a service specifically designed to serve pensioners/the less young without access to or knowledge of how to use IT; citizens’ advice bureaus might have solved the problem.

When I took a patient number from the distributor, the wall illuminated counter displayed a disparity of 75 numbers. Given five minutes minimum per person at any one of three registration counters meant at least two hours to wait before registering; an unrealistic expectation for the infirm and those younger members of our society, who must work and care for children.

I then visited the doctors’ waiting area and found it packed with registered patients, queuing yet again to see their chosen doctor; probably another hour or more.

Why did Gesy not organise a secretarial appointment system, like those that exist in all European healthcare facilities, and our own private sector? Surely, a simple phone call to arrange a rendezvous with one’s doctor is easy to organise given modern IT technology and proficient secretarial personnel.

I wonder if Gesy, by employing antiquated methods, is purposely pushing the seriously sick towards the private sector.

Millions of euros spent on a new museum to house the extinct, millions on a sunburnt concrete slab in Eleftheria Square, millions on unnecessary skyscrapers in an already gridlocked capital city centre, and only ‘peanuts’ invested in the health of our people!

The general public is now paying the HIO/OAY for medical healthcare and do not expect to be treated like sheep and made to endure intolerable delays.

Gesy failed to reorganise in preparation for the flood ahead of the torrential downpour of registration. Did they not even anticipate this chaos?

Please do not entertain the risible excuse that Gesy is suffering teething problems, which will be resolved. After today’s experience of how Gesy operates, nobody will believe a word they say in defence of their promised improved service, other than Gesy has been introduced solely as a means to extort a healthcare cost by law without offering any improvements to the present chaotic public healthcare service, which improvements the minister has yet to specify.

Doctors’ quotas: After seeing 30 patients a day, a medical centre doctor can refuse to see any more. That means that patients who visit medical centres in expectation of seeing their doctor, might queue for hours then be refused access to their chosen doctor.

If after paying for a service you are refused that service, it is not a service at all, but a con.

I’ve highlighted only a few of the existing weaknesses in the present system and expect them and others to persist indefinitely after June 1. The country’s administration is already poisoned by its past administrative history. What makes me think that Gesy is not yet another poisoned chalice?

I predict chaos and unendurable hardship for many unless the public healthcare system’s extant weaknesses are properly addressed before its inception, and not as Gesy says, during its operation. It will be rather like forcing a fist into a gaping hole in a leaking dam.

The most infuriating annoyance is to arrive at a registration counter after queuing for hours to be told that your doctor is not at work that day – there is a total lack of information and communication by staff prior to personally visiting healthcare centres. Often trips are a waste of time and effort.

Now that doctors do shifts and afternoon surgeries, there is no way a patient knows beforehand what’s going on and who’s there or not…. this information should be made available daily online, from specified call centres or in the media to help avoid pointless journeys.

Is this a touching response to registration?  Sounds more like a nightmare in the making to me.