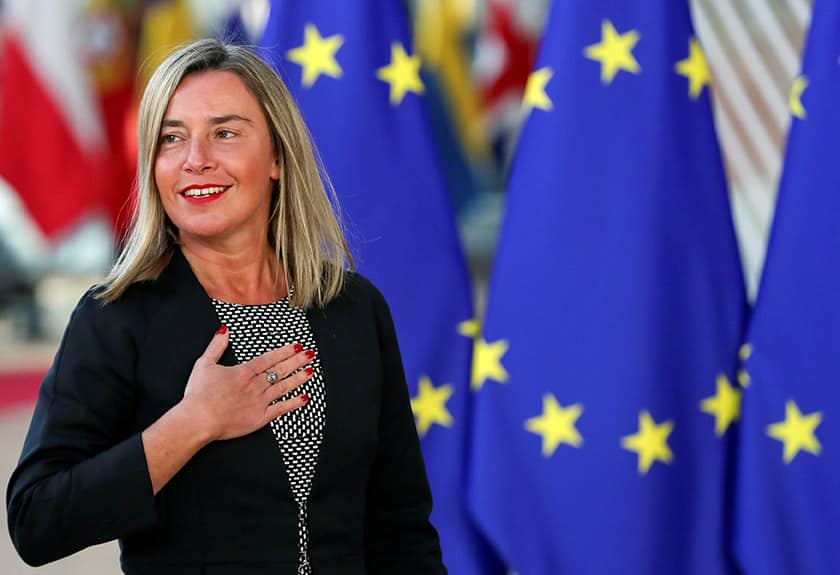 Our Prez hasn’t always been Federica Mogherini’s biggest fan, but she redeemed herself this week

HAVE CHANCES of President Erdogan withdrawing the Fatih drillship from the Cypriot EEZ increased now that our national council has called for the “immediate end to all Turkish acts and threats of violence, in order to reduce tension and for respect of peace and security in the Eastern Mediterranean”?

We all know the answer. Turkey’s autocratic ruler, who thrives on creating tension at home and abroad, has not invested hundreds of millions of bucks on a drillship to keep it docked in some port so he can show his respect for peace and security in the East Med. Nor will the council’s condemnation of Turkey’s illegal activities in the Cypriot EEZ have much effect on the tyrant.

The most persuasive argument for bringing Erdogan to his senses and stopping him from violating Cyprus’ sovereign rights was left till last. Our national councilmen on Saturday warned that without an end to Turkey’s actions there could be no prospect of continuing to engage in the process aimed at finding a way of resuming the talks.

In other words, Prez Nik will be forced to stop the theatre regarding reaching an agreement on the terms of reference that would lead to resuming the talks. Erdogan will probably be as upset as Junior, Lillikas, Theocharous, Perdikis and Sizo at the mere thought of the prospect of the talks about the talks ending, but not as upset as Jane Holl Lute who will have to give up her pointless meetings with the leaders in Kyproulla.

POLITICAL parties unanimously condemned Turkey’s violation of our sovereign rights a day earlier and demanded action from the international community and the EU that would have practical consequences for Turkey.

President of the House Demetris Syllouris informed the House that he had also undertaken an initiative to stop Turkey. He sent letters reporting Turkey’s actions in our EEZ to the president of the European Parliament, the speakers of the parliaments of all EU member states and the presidents of five other parliamentary organisations.

These initiatives will achieve nothing other than a mention in the local media but this is what happens when a country has neither the diplomatic nor the military clout to defend its sovereign rights. It has to rely exclusively on words and hope that some of the big boys on the international stage will take pity on us for being a target of Turkish bullying and, perhaps, offer to help us.

We never learn anything from our experiences. We have been reporting Turkey for 45 years for its invasion and occupation, thousands of resolutions and announcements of support have been issued by international organisations, foreign governments and groupings of states, but where has it ever got us?

Turkey has been occupying our territory with impunity for 45 years, so it is extremely naïve to think the international community will be moved because it will now be drilling in the sea 60km from our coast.

THE GOVERNMENT had hoped it would secure unequivocal condemnations of Turkey’s actions from states we have close ties to, but even this did not happen.

Only our trilateral partners, Greece and Egypt condemned Turkey’s actions. The government of Prez Nik’s close buddy Israel’s Benjamin Netanyahu did not utter a word of support for our sovereign rights, let alone condemn Turkey. And these are strategic energy partners with whom we will build the East Med pipe-dream.

Our new strategic ally, the US, left it to its embassy in Nicosia to repeat the State Department’s mantra that revenue from hydrocarbons should be shared equitably between the two communities in the framework of a Cyprus settlement. Even when relations with Turkey are not at their best, the Yanks are careful not to cause offence.

The same applied to Mother Russia which, in spite of her principled stance on the Cyprob, avoided being critical of Turkey in any way. Instead it expressed grave concern about the heightening of tension in the Cypriot EEZ and urged avoiding any action that would cause tension and create additional obstacles for a settlement of the Cyprob. This concern was understandable given Moscow’s unwavering commitment to a settlement.

Meanwhile Russia’s ambassador, Stanislav Osadchiy, tried to give false hopes to the natives by informing us that foreign minister Sergei Lavrov would be visiting Kyproulla soon, without giving a date. Lavrov will probably try to give the stalled peace process a push.

FOREIGN minister Nikos Christodoulides, who immediately took on the role of our EEZ defender, told us that Turkey’s action will be at the centre of his talks in Paris before he visited last Tuesday. Official announcements said a range of issues were discussed.

There was no public statement by the French foreign minister, Jean Yves Le Drian, after his meeting with our Nicos. All Christodoulides had to show for his significant meeting was a statement issued by our foreign ministry informing us that Le Drian told Nicos that France condemned Turkey’s illegal actions.

It was a condemnation behind closed doors during a private conversation, which must have disappointed our government. Asked what the message of Emmanuel Macron was at their meeting during the informal summit in Sibiu, Prez Nik said “steady and strong support”.

AT LEAST the EU offered us some of that. First the High Representative for Foreign Affairs Federica Mogherini, whom our Prez liked to bad mouth because she did not buy his version of events at Crans-Montana, slammed Turkey’s actions, and after the Sibiu summit the president of the European Council Donald Tusk said the council “would carry on closely monitoring the situation”.

Initially, our government wanted more from the informal summit, trying to secure a mention in the council’s declaration, but this was impossible as the text had already been agreed. In the end it had to settle for a statement by Tusk.

Nik tried to lower expectations after the summit. Measures could not be taken at an informal summit, he said “and we should not expect anything like that at the May 28 summit”. First all diplomatic efforts to resolve the matter had to be exhausted, and only then would decisions be taken.

The government raised expectations before the summit and lowered them afterwards.

THERE was no shortage of suggestions of how to deal with Turkey’s violation of our sovereign rights, which our Prez described as a second invasion. Most parties demanded that the EU impose sanctions on Turkey for invading our EEZ with its drillship, an idea also embraced by the government.

Green nationalist Giorgos Perdikis, showed that apart from a populist he is also a fantasist, urged Prez Nik to try to persuade the rest of the EU leaders to proceed with the imposition of sanctions against Turkey during the Sibiu summit. Fantasy politics was always Perdikis’ forte.

Diko demanded that Tusk’s statement should be “practically used” so as to prepare the “ground for measures to be taken against Turkey that would incur a real political and economic cost to Turkey”. It was the only language Turkey understood Diko concluded. Phil, reporting the government plan for sanctions on Tuesday estimated the cost to be tens of billions of euros.

Apart from economic and trade sanctions, Edek chief Dr Sizo, a bigger fantasist even than Perdikis, called on the government to demand “the aeronautical presence of the EU in the EEZ of the Cyprus Republic”. In plain language, he wanted the EU navy and air force that does exist to defend our EEZ.

THE HYPOCRISY of our parties and government in demanding EU sanctions against Turkey, like those imposed on Russia for the invasion and annexation of Crimea, was highlighted in an editorial in Friday’s Politis. They were all opposed to the EU sanctions against Mother Russia.

In February 2015, Prez Nik told Itar Tass that “it is impossible to achieve a positive result with military means or sanctions. Issue would be resolved exclusively through diplomatic means and through dialogue.”

In July 2016, our legislature approved a resolution calling on the government to work within the European Council for lifting the sanctions imposed by the EU on Russia, while urging the sides involved in the Ukrainian crisis to carry on with the dialogue. If sanctions were unjustified against a country that invaded and annexed part of another country, how can they be justified in the case of Turkey’s drilling in our EEZ?

Politis also recalled that three party leaders – Kyprianou, Lillikas, Theocharous – visited Crimea, at the invitation of Moscow, as if they approved of its annexation.

ARGUABLY the smartest idea for punishing Turkey’s invasion of our EEZ was that of our foreign minister Christodoulides, who arranged for European arrest warrants to be issued against the crews on the ships. Although the crew of the Fatih were from Azerbaijan and could not be touched, the crews of the three accompanying ships were reportedly from Norway.

Whether our authorities will find the names of the members of the crews remains to be seen. But even if they do, they will then have to prove that they were on the ships and knowingly committed a crime. Once a sailor gets a job on a ship, how is he supposed to know anything about the Cypriot EEZ or that the ship he is on is actually violating it?

Even if he is made aware of this, when the ship enters the Cypriot EEZ what is he supposed to do? Jump into to sea to avoid breaking the law? Swimming in our EEZ is not illegal.

MEANWHILE, a Phil columnist, expressed regret that we did not adopt his brilliant idea for thwarting Turkey’s second invasion. “The Republic does not have military capability of stopping the drillship, but Greece could have sent a frigate to the area, the presence of which would have caused a controlled and manageable crisis. Such a development would have activated the US and Nato, which would not want a Greece-Turkey clash.”

The smart columnist did not explore the possibility that the crisis might have become anything but controlled and manageable or that it would not have activated the US. As long as the war remained between Greece and Turkey and did not affect tourist arrivals to Kyproulla who cares?

APOLOGIES for today’s single-issue coffeeshop. We will close with a quote from Prez Nik, which was quite amusing in its offensiveness. “International law is not what is written in the Koran of Mr Erdogan.” We must hope a fatwa is not declared against our man for his irreverence.

Need and greed are a fraudster’s paradise