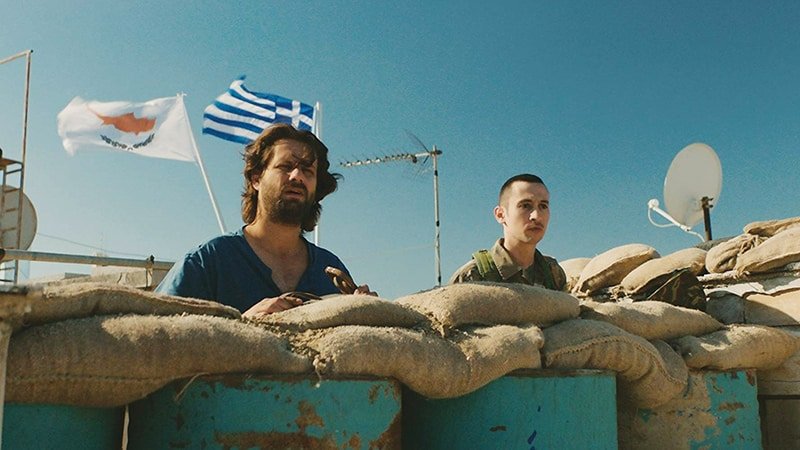 Cypriot cinema comes of age in Smuggling Hendrix, a comedy that’s already done us proud by winning a number of awards (notably at Tribeca) – though in fact awards are just a bonus, the real criterion being something much simpler. It’s often the case, when watching a Cypriot film with non-Cypriot company, that one feels a need to preface the screening with a friendly reminder that it is, after all, a Cypriot film, and our industry is ramshackle verging on non-existent. Smuggling Hendrix is a light, deceptively casual movie – yet it totally does away with the need to issue such a warning. No excuses are necessary here; the film is tightly scripted, totally professional and, at a fleet 92 minutes, without an ounce of fat. A viewer who knows – or cares – nothing of Cyprus could watch it and be utterly charmed from beginning to end.

A viewer who knows nothing of Cyprus might also come to some awkward conclusions. They might conclude, for instance, that the most victimised and hard-done-by group on the island are the Turkish settlers, resented by both sides through no fault of their own. “I’m Cypriot, [whether] you like it or not,” protests Hasan (Fatih Al), probably the most likeable of the four main characters. Another possible conclusion is that all sides are approximately equal when it comes to grievances (and, by extension, blame). “Let’s make something clear,” says Hasan, sitting in a sweaty meeting – in a Turkish hamam – with Tuberk (Ozgur Karadeniz), a Turkish Cypriot, and Yiannis (Adam Bousdoukos), a Greek Cypriot: “Nobody likes anybody here!”. True enough – yet many in Cyprus will insist that ‘we’ have good reason not to like ‘them’ whereas ‘they’ have no reason to dislike ‘us’, the ‘us’ and ‘them’ changing depending on who you talk to.

That Hendrix skewers such hypocrisy is obviously a good thing. That it does so in such a light, non-provocative manner is mildly miraculous, focusing on everyday absurdities – a familiar feature of political systems everywhere – rather than get bogged down in historical specifics. It’s obviously absurd, for instance, that there’s no border (the Greek cops insist on it) if you happen to be crossing from the Republic to the occupied areas, yet a border magically appears if you try to cross back with an animal in tow. The animal here is Yiannis’ dog Jimi – the titular ‘Hendrix’, the reference explained in a quick throwaway that’s typical of the film’s nimble style – who goes over to the north and must somehow be smuggled back. Also in the mix is Kika (Vicky Papadopoulou), Yiannis’ ex, whose presence goes some way to answering the repeated question: “What’s so special about this dog, anyway?”.

Jimi represents the failed relationship, and the torch that Yiannis still carries for Kika – an aspect that’s never belaboured, merely implied in a couple of lines. Writer-director Marios Piperides (in his feature debut) makes excellent use of downtime, working in the interstices between major plot points. There are only three or four reversals, all amusingly staged – but the real meat appears in the seemingly incidental scenes when our heroes are waiting for something to happen. That’s when they bicker and reveal bits of back-story, adding charm and dimension to the characters; that’s when, for instance, Yiannis (a burned-out musician) sings a rueful love song on his guitar, during an interlude in a rather disreputable house with Rasta flags on the walls. Smuggling Hendrix knows that you catch more flies with honey than vinegar: the film is at its most tightly scripted – both dramatically and indeed politically – whenever it appears most relaxed.

Cypriot movies aren’t usually so canny; then again, is this really a Cypriot movie? The big-name producers are Greek and German; none of the four main actors is actually Cypriot (two are from Turkey, one from Greece; the rumpled Bousdoukos, best-known from Soul Kitchen a decade ago, is a German of Greek descent). Second viewing also revealed a few niggly flaws. Kika isn’t quite as rich as the other protagonists; the film leans heavily on ‘joke’ cuts to move things along, i.e. two people seemingly at cross-purposes then a sudden cut to the next scene solving the impasse and getting a smile from the audience. Then again, second viewing also confirmed how solid it is, down to supporting actors and tiny gags: Jimi the dog yawning when the cop starts to quote EU regulations, or Yiannis buying an inflatable air-bed, miffed to discover that the pillow is a big Turkish flag after he inflates it, and quickly flipping it over to reveal… the Turkish Cypriot flag.

Anyone can watch Smuggling Hendrix and be entertained – but of course a local (especially Nicosian) audience will get even more; we recognise the reference to New Division pub, or the quick shot looking up from inside the moat. This is indeed Cypriot cinema – but it’s Cyprus in European mode (no borders!), putting a reasonable face on our divisions and learning to see ourselves as others see us. “He’s a small dog,” protests Yiannis when he finds out that Jimi has been pumped with pills; “They were small pills,” comes the reply. This unassuming, humanistic film is also small – but it comes with some pretty potent pills, if audiences choose to take them. Here’s hoping.

In Greek, Turkish and English, with Greek (or Greek and English) subtitles

China says will ‘never surrender’ as US trade row heats up