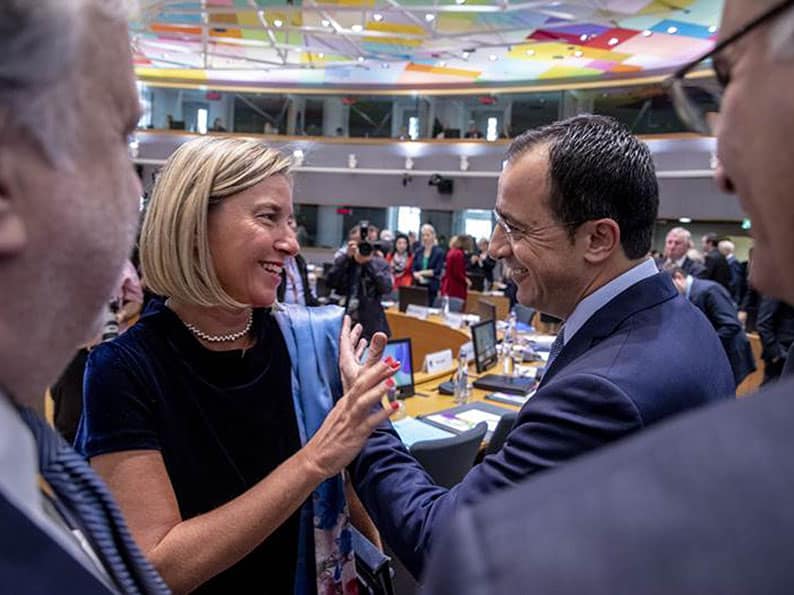 But an unfazed Ankara amplified its rhetoric by hinting that a second drillship would be despatched to waters around Cyprus.

At the gathering in Brussels, EU ministers also seemed more preoccupied with the situation in Libya, as well as the Iran nuclear deal.

“The situation requires collective action on the part of the union, the basis of the provisions of the EU treaties and the joint statements of the union on this subject,” diplomatic sources said Christodoulides had told his counterparts.

He said that the messages sent by the EU and its partners in a spirit of solidarity do not seem to have been heard by Turkey, he said. Instead Ankara continued its provocative actions just weeks before the publication of progress on its EU accession course and in violation of the commitments it has made towards the EU.

Nicosia found support in France, Greece and other countries as well as Mogherini, who said that she was speaking on behalf of all and stressed that “this time we must act with determination,” the sources said.

Christodoulides said after the meeting that Mogherini expressed the EU’s concern about Turkey’s actions and called on Turkey to show restraint, to respect the sovereign rights of Cyprus in its EEZ and to abstain from any such illegal action.

“She said the EU will respond in an appropriate manner and in full solidarity with Cyprus,” Christodoulides said.

This, he said, was something that was stressed as the foreign ministers’ clear position in full solidarity with Cyprus.

Full announcements regarding the EU’s stance – or measures – relating to Turkey’s incursions into Cypriot maritime zones will be left to the next formal European Council summit, to be held in early June.

“In the interim, the government is working diplomatically to lay the groundwork for the EU’s response,” the same sources said.

Christodoulides had a meeting on the sidelines of the Foreign Affairs Council with EU Commissioner on enlargement and neighbourhood policy, Johannes Hahn who said he shares Cyprus’ grave concern over Turkey’s drilling plans within the Republic’ EEZ.

He reiterated that “the European Council has strongly condemned such actions in the Eastern Mediterranean” and warned that “this position holds.” He also called on Turkey for restraint and respect of the member states’ sovereign rights.

On the status of the Turkish drillship, the Fatih, the sources said the vessel remains stationary at the same position, west of Paphos.

There was no information on whether the rig had begun actual drilling.

“But we are operating on the assumption that the Fatih does have the wherewithal to drill.”

The government meanwhile is still gathering data on the individuals and companies involved with the three ships supporting the Fatih, with a view to applying for international arrest warrants.

Meantime Turkey’s energy minister Fatih Donmez announced that their second drillship, the Yavuz, would “soon” be undertaking drilling operations in the eastern Mediterranean.

This will occur once the Yavuz is outfitted with the necessary equipment, Donmez told Milliyet newspaper.

For this year, he added, Turkey plans two drills in shallow waters, and three to four drills in deep waters.

Commenting on the Greek Cypriot reaction, the Turkish minister reiterated that the Turkish Cypriots have ‘rights’ on certain parts of the EEZ declared by Cyprus.

Donmez spoke of efforts to exclude Turkey from the “eastern Mediterranean equation”, alluding to hydrocarbons resources.

“Any formula which leaves Turkey out of this equation is wishful thinking. We have long stated that we would be conducting our own explorations.”

“The Fatih is already mobilised, and in coming days our second drillship, the Yavuz, will also be mobilized.

“Based on scientific realities, I can clearly state that in Turkey by 2020 we shall be hearing very pleasant news about oil and natural gas, especially relating to explorations at sea and on land. I want our 82 million citizens to know this.”

Asked about Turkey’s second drillship being sent to the Cypriot EEZ, the government sources told the Mail that, although no scenario can be ruled out, it is possible Turkey is playing psychological warfare games with Nicosia.

“Maybe that’s what they want us to think, to keep us on edge.”

Daughter thanks police for safe return of missing elderly mother