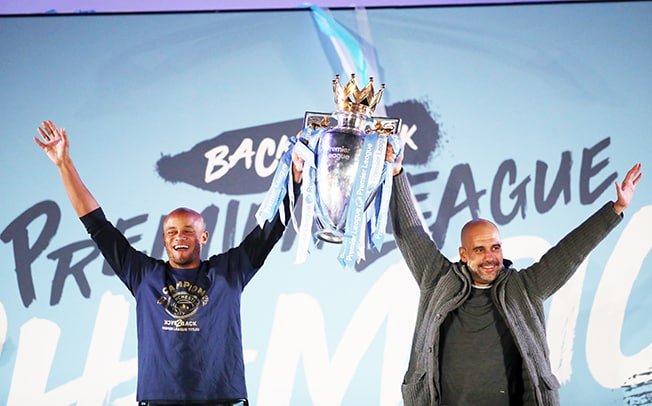 Pep Guardiola has branded Manchester City retaining the Premier League title as the toughest of his nine major league triumphs.

City pipped Liverpool to the league crown by just one point following a 4-1 win at Brighton to conclude the greatest title battle in top-flight history.

Sergio Aguero, Aymeric Laporte, Riyad Mahrez and Ilkay Gundogan all hit the net as City stormed home at the Amex Stadium after Glenn Murray had given the Seagulls a shock 28th-minute lead.

City rattled off 14 successive victories to seal the title, with Guardiola then declaring his players and coaches are nowhere near satisfied.

“I’m not going to deny it is exhausting but winning is so addictive and now we have the chance to win the FA Cup and a treble.

“Then we have to make decisions for next season to come back strong. Liverpool will maintain and so we have to be better.

“And that’s why the second one, to make it back to back, shows me this kind of thing. It shows me it wasn’t enough (for the players), that one wasn’t enough.”

Murray headed Brighton into the lead to hand City a scare but that fright lasted just 83 seconds.

Aguero buried the visitors’ first chance, and after Laporte headed in from a corner 10 minutes later, Guardiola’s men never relented.

City have racked up 198 points across their consecutive title victories, with Guardiola claiming Liverpool’s chase has driven his side to new levels this term.

Liverpool’s 97-point haul would have won all but these last two league campaigns.

Guardiola was keen for his players to enjoy the moment but then confirmed City will quickly refocus on completing that unprecedented domestic treble.

Adamant City will be ready for Saturday’s FA Cup final against Watford, Guardiola joked his side still has weak points.

“Yes, there are weaknesses,” he said. “I’m the tallest guy, so at set-pieces I must go to the church and pray. It’s a trouble.

“No teams in England have done that before so we have to challenge, compete and be focused on this game. Of course, the FA Cup isn’t easy to achieve to get to the final and we are going to try to win.”

When asked if his side will go down as the best in English history, Guardiola simply said being in the conversation is all anyone can ask.

“When people suggest you can be one of the best that’s enough,” said Guardiola. “But we had this in Barcelona, too.

“Like books, movies, if they sustain the passage of time, if after 25 years people are watching the same movie, reading the same book.

“If people still talk about this team after that time, then it deserves to be considered alongside the best Man United, the best Liverpool, Chelsea, Arsenal.”

Brighton boss Chris Hughton hailed City’s iron will to drive to the title.

“We never go into any game feeling we’re going to lose,” said Hughton. “We know what we have to do to try to compete.

“At the moment it’s a big gap that Liverpool and City have opened up but I don’t worry about it because it changes.

“In two, three years’ time it can be different.

“City are so clinical and they deserve their success.”