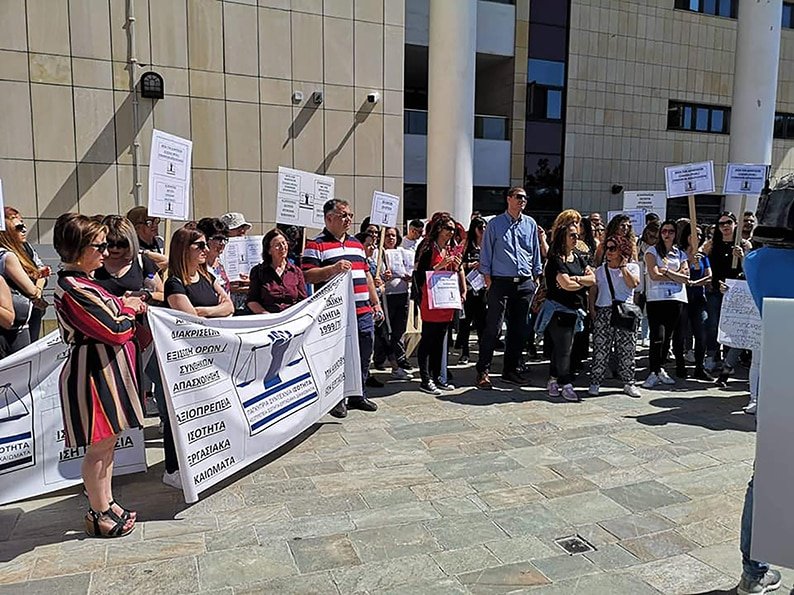 Public sector contract workers outside the finance ministry on Monday

A 48-hour strike by contract workers in the public sector started with a march from the finance ministry to the presidential palace on Monday morning.

The workers are protesting over not getting the same treatment as their colleagues with permanent posts.

At the presidential palace the protesters handed a memo to government spokesman Prodromos Prodromou, who assured them that the president was aware of the issue.

The demonstrators then returned to the finance ministry, where the march ended.

On Tuesday the protesters will meet at the finance ministry again and march on to the House of Representatives.

If an agreement can be reached the strike will be called off, otherwise measures will be stepped up, the union warned.

“We did everything we could, we exhausted all the means we had in the last year and a half, but unfortunately there was no response,” the head of union Isotita (Equality) Christos Hadjipavlou told the Cyprus News Agency.

In the central government, he explained, more than 5,000 employees are affected, and about 11,000 in other public companies, about 33 per cent of the public service and the wider public sector.

The employees work at places such as the citizen service centres, the district administration, the land registry, the courts, hospitals and post offices.

The strike action was approved at a meeting Isotita’s board on Saturday evening, following a failure to make any progress during a meeting with representatives from the ministry of finance on Friday.

Last Wednesday initial action by the union saw most citizen service centres across the island halt operations for two hours in the morning, with actions continuing on Thursday and Friday.

The finance ministry announced on Sunday that the citizens service centres will remain open over the next two days but service will be slow because of the reduced number of staff. Priority will be given to urgent cases.

The union says that an EU directive on fixed-term employment which stipulates that such workers must not face unjustified discrimination is not being honoured by the state.

According to the union during Friday’s meeting the finance ministry refused to accept Isotita demands that temporary and contract workers be allowed to join the same pension programme offered to full time staff and also pay the same reduced contribution to social insurance.

The same response, the union said, was given to their demands that those who do the same work are on the same scale, regardless of whether they are contract workers or permanent staff.