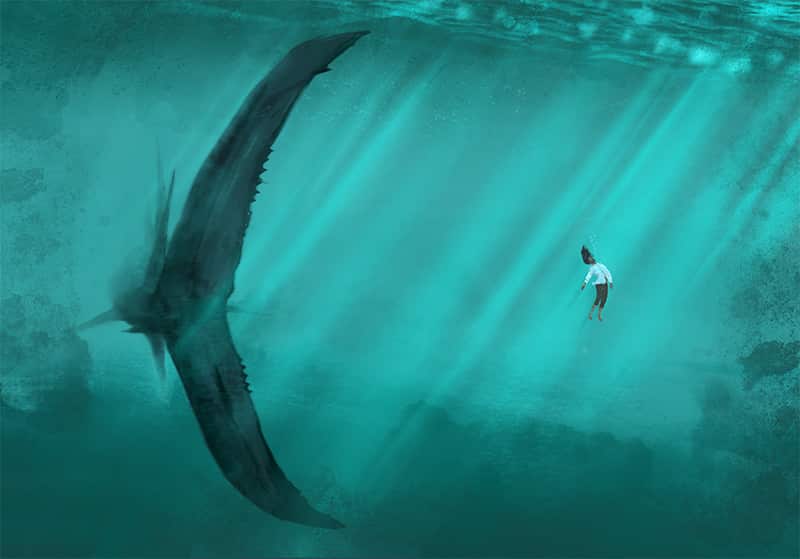 We tend to think of authors in two classes. Either they’re middle-aged men with a penchant for the Cold War, writing throwaway spy novels, or they’re struggling young women, diligently tapping away in their home office, surrounded by kids/washing up/a doting (and financially supportive) husband. Frixos Masouras falls into neither category. And his oeuvre is as wildly different from mainstream literature as, say, a mermaid from a school of cod. Which is rather apt because his first, and rather unusual, book revolves entirely around the sea…

A novella rather than a full-blown tome, The Ballad of James Tig is a delightfully confounding tale: an almost Norse epic wrapped into just 100 pages. The tale details the titular Tig’s fantastical struggles with a legendary monster of the deep; a Moby Dick-like plot, in which “a sailor who lost his entire family to a fabled monster as a child, makes it his life’s quest to bring it down”, but with a musical element…

This needs a bit of explaining… Originally conceived as the storyline to a cinematic album from local rock legends Winter’s Verge, the novella parallels each track. “Meaning the album tells a story in its entirety, progressing the narrative with each song, complete with three acts and everything that goes with them,” Frixos clarifies.

“Back when my dearest of friends George Charalambous, frontman and founding member of the local heavy metal band Winter’s Verge, confided in me that he wanted the next album of the band to be ‘cinematic’, I instantly thought ‘concept album!’” he continues. “And, mere days after we’d decided that he would write the album’s music and I the lyrics, I realised that this story was also worth telling in writing. And thus, The Ballad of James Tig – the novella – was born.”

This isn’t the first time the multi-talented, uncategorisable Frixos has turned his hand to alternative genres: “I’d already worked with the band on their last album, Wolves of Tiberon, writing the story, and penning and voicing five narrations, which were placed between the five songs. I’ve also written a play, Αντίο, Κοπρόσκυλα (Goodbye Mongrels), which had a run through last October to great success. And, alongside my brothers in arms, Andreas Kyriacou and Harry Ayiotis, I’m currently in deep discussions with European production companies concerning our award-winning TV series concept The Midnight Shift. I also,” he adds, “commentate Premier League matches and the Formula 1 championship for CytaVision, and moonlight as a presenter for the martial arts events of Prestige Fights…”

Words, it seems, are this 36-year-old’s focus, be they written, sung or spoken, and have been since childhood. “My passion for story-telling began when I was 12 years old, when I rolled my first die while playing Dungeons & Dragons, and I could literally yammer on about every bit of art, piece of literature and moment in life that has affected me as a writer through the years,” he smiles. “And,” he adds, specifically referencing James Tig, “I’ve also been inspired by my own experiences with the sea, which I love and fear in equal measure. Khilagorak” – the fabled monster of his oeuvre – “was greatly inspired by the monster of Spielberg’s incredible blockbuster Jaws, a film I first saw at the age of nine, and which I singlehandedly blame for making me a storyteller in the first place!

“Of course I now know,” he adds with a laugh, “that sharks are not monsters! And this plays into the themes I generally write about: there are monsters in real life, but they don’t have fangs, fins or sharp claws. WE are the monsters. Hence, the ‘human monster’ is one of my favourite subjects.”

There’s a big clue there as to the plotline in The Ballad of James Tig. It’s nothing as simple as the metaphorical tiger in the Life of Pi, or the titular whale in Moby Dick, but the monster of Frixos’ novella is, indeed, “an inevitable, unstoppable, perpetual force” and, “though fighting him would be folly, if that’s what your life is for then, by all the gods, crew a ship and sail for that seemingly unattainable goal.

“James Tig is the artist you know, or any man and woman struggling to rise above the difficulties of life while staying afloat on top of their passions, vices and quirks. We know they will hurt in the end, but that’s what we do, because we love them and we know no other way. Because that’s what we, as humans, must do: live out the things we love and hate, to our own detriment!”

Fortunately for Frixos, his love of writing has proved far from detrimental! Although only his first novel, James Tig has already sold out: 150 copies flying off the shelves at the book’s Cyprus Comic Con launch. The second edition, however, is already underway (with the same ethereal cover visuals from George Vasiliou and additional illustrations including a map of Frixos’ fantastical world), and will be out in time for the launch of the Winter’s Verge album paralleled by the text.

“The second edition will also be released as an ebook,” Frixos adds. And while he freely admits there will be no sequel to James Tig – “you’ll see why when you read it!” – the author’s personal literary saga certainly doesn’t end there! “As every writer would say, I have countless ideas for what’s coming up next…”

With such passion and skill (Frixos lists his job as “writer / screenwriter / scriptwriter / commentator / editor / presenter / copywriter”!), to draw on, we can no doubt expect to see a great more of this author in the future. But there’s no thought of going mainstream: for Frixos generic bestsellers are the antithesis of what he’s about. And though he’s already decided his next book will “most likely be an appropriately-sized novel,” his plotline is sure to be just as unusual as that of The Ballad of James Tig. Read away, and discover the imaginative worlds and words of Frixos for yourself…

The second edition of the novella The Ballad of James Tig by Frixos Masouras will be released by autumn to coincide with the launch of the Winter’s Verge album of the same name. For more information, email [email protected]