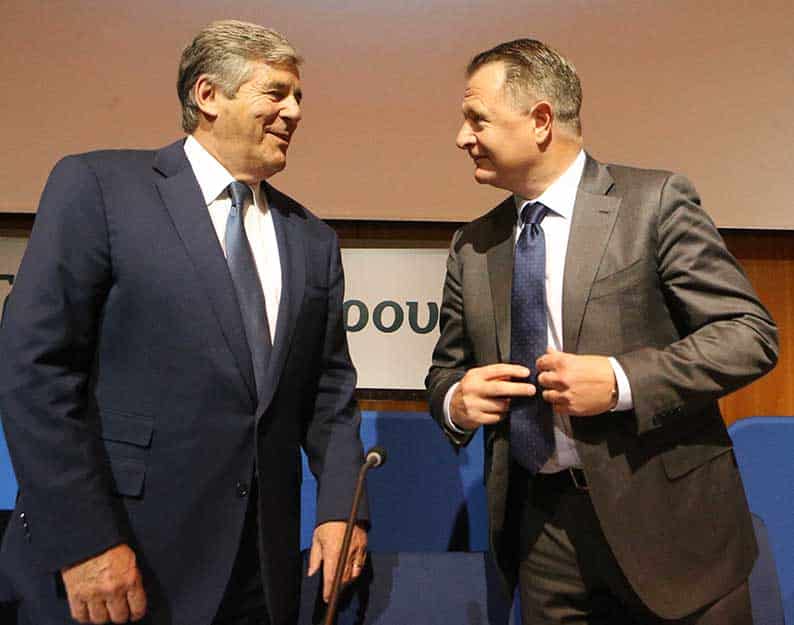 Outgoing Bank of Cyprus (BoC) chairman Josef Ackermann and CEO John Patrick Hourcian on Tuesday said the change in leadership at the lender would not slow its momentum going forward.

“I would like to reassure all shareholders and the Bank staff that the change in the bank’s leadership that is underway will not disrupt the momentum of the ongoing reforms to effectively address the remaining and the new challenges facing the bank,” Ackermann said.

On Monday the bank announced that it had generated a €95m net profit in the first quarter of the year on tax legislation amendments and adjustments in the sale of non-performing exposures.

Changes in the positions of the Chairman of the Board of Directors and the Managing Director were an opportunity to continue the process with renewed vigour and excitement, he added, paying tribute to Arapoglou who he called “a respected colleague and friend for many years”. The new chairman, he added had a wealth of international experience in international capital markets and corporate, commercial and investment banking in Europe, the Middle East and Africa, as well as extensive experience at the National Bank of Greece. “I am therefore very confident that, with his extensive experience, Takis Arapoglou will be a valuable addition…,” he said.

Referring to Nicolaou, Ackermann said the new CEO was coming from “the bank’s family” and needed no introduction and had played a key role in strengthening the bank’s partnerships with major clients.

“Panicos knows the bank and its policies and is ready to lead the bank forward,” he said.

Ackermann said that looking back at the period when he took over the chairmanship in November 2014 he recalled the “deep wounds and dislocations from the dramatic events of March 2013” both for the bank and the Cypriot economy.

“We had a dream both about the bank and about Cyprus, implementing a three-pillar strategy, focusing on the bank’s activities, repairing the bank and building the bank,” he said. “Our dream for the Bank remains alive and strong. Our initial reform strategy is still the right strategy. Four and half years later, I am pleased and proud to report that, while we still have plenty of work to do, the results from the implementation of the strategy have  been  impressive  and  have exceeded our initial expectations.”

In his address, Hourican said: “The bank has made good, if at times, painful progress in its recovery over the past five years.”

It had, he added, much improved asset quality, stronger capital, stronger liquidity, fewer branches, better  technology  “and a  clear focus on completing the job”.

The bank’s balance sheet has shrunk by €9 billion compared with 2013, while non-performing loans had declined by €10 billion since the peak of 2014, while carrying €4 billion in excess liquidity, he said.

“We remain committed to finish our balance  sheet de-risking and refocus the business on supporting the growing Cypriot economy. Whilst there remains more to do in rebuilding the value and financial position of this institution, I am confident that we have the right building blocks in place to eventually achieve our goals,” Hourcian added.

A key objective over the coming quarters would be to further develop a more efficient business model with a focus on sustaining revenues while at the same time significantly reducing costs and better managing labour relations, Hourican added.
Nicolaou, in his first public statements on behalf of the bank on the sidelines of the AGM, said the lender would continue to set and achieve high goals and that his new position was for him, not just a huge privilege but also a huge responsibility.

“By assuming this responsibility, I would like to assure that as in the past the management team and staff have always set high goals and succeeded in achieving them,” he said. “We will continue to do so in the future.”