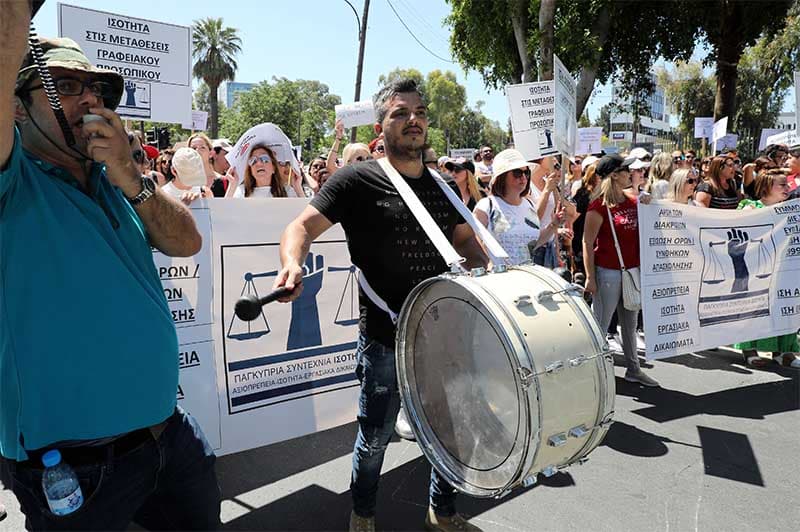 The striking workers marching on Tuesday

On a second day of protests on Tuesday public sector contract workers threatened an indefinite strike after marching from the finance ministry to the House of Representatives and the Supreme Court.

At the house and the court, they handed over a memo, calling for the same treatment as their colleagues with permanent posts.

Motorcycles preceded the march, and protestors used drums and bullhorns, holding placards and banners saying “Equal remuneration for equal work, remove discrimination” and shouting slogans such as “We want equality, equal rights” and “End the illegality”.

Head of the contract workers union Isotita (Equality) Prodromos Christofi said the delegation went to see the President on Monday, the first day of protests, and on Tuesday had the intention of seeing the President of the House, who was absent.

“We saw the deputy head, we handed him a memorandum with the demands of our union,” he said.

Referring to a meeting with the finance minister last week, Christofi noted “the minister clarified that he would not accept anything that would substantially increase the cost of government spending.”

As there has been no change, the union will likely decide on an indefinite strike, he added.

Asked about the union’s answer to those who say Isotita is taking advantage of the pre-election period, he said it was not a secret that the union was using this period of time, in particular before the EU elections, to apply pressure on something that should obviously be done.

In the central government, Christofi explained, more than 6,000 employees are affected, and about 11,000 in other public organisations or around 33 per cent of the civil service and wider public sector.

The employees work at places such as the citizen service centres, the district administration, the land registry, the courts, hospitals and post offices.

During the two days of protests citizens service centres remained open but it was expected that service would be slow because of the reduced number of staff.

Last Wednesday initial action by the union saw most citizen service centres across the island halt operations for two hours in the morning, with actions continuing on Thursday and Friday.

Ireland bans US preacher who called for gay executions