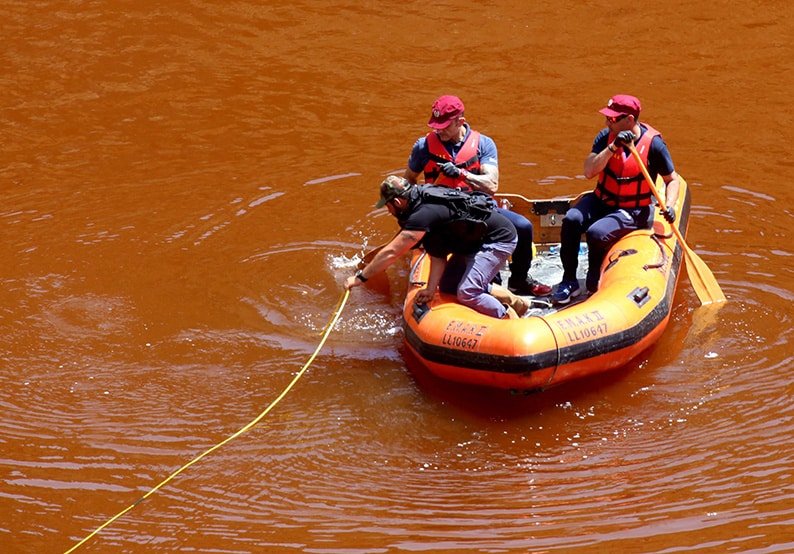 A cement block was pulled from the toxic lake in Mitsero on Tuesday where crews continued to search for another victim of self-confessed serial killer Nicos Metaxas.

A diver brought the block to the surface at approximately 5:30pm after starting a search in the area at around 4pm.

Police said that the chief ordered members of the CID to head to the scene.

Meanwhile, a post-mortem examination finished on the body of the victim found in the suitcase pulled from the lake on May 5, believed to belong to Elena Natalia Bunea, 8, the daughter of Livia Florentina, 36, one of Metaxas’ victims.

Deputy police spokesman Stelios Stylianou said the post-mortem was completed at approximately 5pm and the samples were taken from the body for further testing.

“Yesterday and today, approximately 100 vials of samples were taken during the post-mortem, which will be sent for histopathological and other specialised testing,” he said.

Of the seven murders of female foreign nationals – five women and two children aged 6 and 8 – that 35-year-old Metaxas confessed to the police to have murdered, five bodies have so far been found, with police still searching for six-year-old Sierra Graze Seucalliuc and one more body, probably that of Marricar Valdez Arguiola, 30.

Earlier, Fire chief Marcos Trangolas rejected suggestions to empty the lake, as well as that of Memi, not far away, where the body of another victim, a child, had been dumped.

Speaking on Active radio, Trangolas said a sonar system that helped crews recover two bodies from the toxic lake was scheduled to be withdrawn after mapping the red and Memi lakes in the past couple of weeks.

Crews will continue to review its data in the hope of finding and recovering a suitcase with the body of one of seven victims claimed by Metaxas, who said he had dumped the body of a six-year-old girl, the daughter of one of his victims, in Memi.

Trangolas said they were experiencing difficulties mainly because of the vast amount of mud covering the lake.

Officials believe the mud could be over four metres deep, making it hard for the sonar to detect objects that may lie underneath.

“Our concern is that this suitcase has been covered by mud and is lying flat,” Trangolas said.

Some areas were explored by divers but so far, they have found nothing relating to the crime.

“In the past few days the divers operate in areas we have indicated,” the fire chief said. “Corridors were created in important sites using ropes to check and liminate certain areas.”
Experts from the UK’s National Crime Agency whose assistance had been sought suggested using ground penetrating radar but that too appears to be a no-go at least for the red lake.

“We exchanged views with the radar operator… we sent him the lake’s data, the water quality, and the underwater terrain. The reply we received yesterday (Monday) was that there are many difficulties and the radar will not have the desired results,” Trangolas said.

He added that they were now awaiting his view of using the equipment at the Memi lake where the water is clear.

Trangolas also ruled out emptying the lake, formed at the bottom of a huge crater created by quarrying, since no one really knew how much water it contained, on top of the water being toxic, which would necessitate special permission from the environment department.

But even if the water was extracted, there was no way of dealing with the mud.

WHO advice on dementia: exercise and don’t smoke