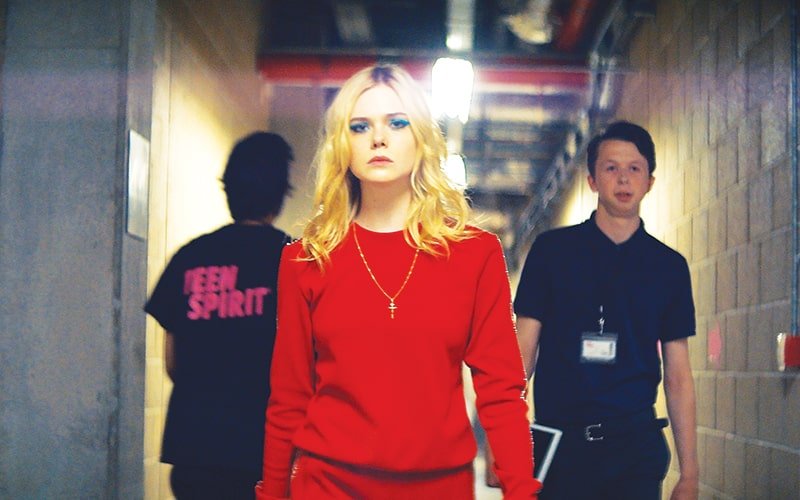 There’s a vision in Teen Spirit, even if it’s the wrong vision. This is the straightforward tale of 17-year-old Violet (Elle Fanning), a small-town girl trying to win an X-Factor-like talent contest called Teen Spirit – I won’t spoil if she actually wins, though suspense isn’t really at a premium – except that director Max Minghella, and director of photography Autumn Durald Arkapaw, are determined to make it less straightforward, giving the film a melancholy look. Almost all of it is murky and depressing, set in empty sepulchral bars, large impersonal spaces, and the night-time woods around Violet’s home on the Isle of Wight.

It’s an interesting take, at least in theory. Today’s corporate music (the film is studded with covers of pop hits by the likes of Ellie Goulding and Carly Rae Jepsen) gets billions of views on YouTube yet remains depressingly empty, the vocals invariably Auto-Tuned, the production crushingly samey. Maybe Minghella and Co. watched Vox Lux, the acclaimed recent drama that also featured pop music and went for a grim visual texture, and tried to repeat the trick – but the vision in Vox Lux made sense, since it dealt in the sadness/madness of the 21st century and posited pop as a kind of longed-for oblivion (the soulless music we deserve, you might say). Teen Spirit, on the other hand, seems to be trying to have it both ways – to appeal to the X-Factor teen crowd while also suggesting that the world of pop is hollow, and Violet’s dream basically unworthy.

She’s a moody one, that much is clear. “Vote for me tomorrow on Teen Spirit!” plead the finalists in chirpy little promo videos – but Violet’s is notably un-chirpy, looking like she resents both the camera and anyone misguided enough to vote for her. Maybe it comes from being Eastern European – and the film is unusual in focusing on the new Britain of not-quite-assimilated EU immigrants: Violet’s single mum is Polish and conspicuously Christian (the religious angle isn’t mocked, as you’d expect in a British movie), while her mentor Vlad (Zlatko Buric) is a broken-down Croatian former opera singer. He’s now a drunk and lives in a kind of garage, shot with shallow focus and sickly yellow light – another of the film’s visually downbeat images.

Unfortunately (or fortunately?), the gritty look is just a look. The plot sticks mostly to the talent-show template, our heroine learning to “sing from your heart” as she wows the judges and connects with audiences – and of course bonds with Vlad, the surrogate dad in her life. There’s a lot of clichés here, though Minghella’s original vision might’ve been richer. Note, for instance, Violet’s “posh accent” (a liability when seeking the popular vote, say the show’s organisers), as if consciously trying to bury her Polish origins – and why, after all, is she so moody? Why does she sing all those sad songs? Why does she not believe in love? (“Love isn’t real.”) There are questions lurking under the surface – but the script doesn’t bring them to the surface, and neither does Fanning. The actress may be going through a phase, insofar as she always had a precocious quality as a child actress, something troubled and a little opaque – but she’s not a child now so that distance no longer seems precocious, just pouty. I assume it’ll change in a few years, when she fills out emotionally; right now, however, the complicated surface is all she has.

The same may be said of Teen Spirit, a film with a complicated surface and not much to show for it. Even the plot gets silly in the final stages. There’s a big, boozed-up party the night before the show – the question being whether Violet will get too wasted and be unable to sing the next day – which surely wouldn’t be allowed by any real-life X-Factor; I assume the organisers watch the young contestants like hawks, especially given how pre-conceived these shows are anyway. The main dilemma also seems a bit contrived, with Violet being offered a recording contract just before the show – but it means ditching Vlad and she has to accept before going onstage, or the offer is void. It’s not that a record label wouldn’t stoop to such dirty tricks (I’m sure they would), but is it really such a stark dilemma? Surely she might get an even better offer from another label – or the same one with better terms – after the performance, even if she doesn’t win?

Who knows, who cares? The real point is that Minghella is 33, the son of Oscar winner Anthony Minghella, and making his debut as director after years as an actor – so he’s looking for something commercial that’ll nonetheless showcase his skills, hence this rather schizophrenic movie. Teen Spirit gives a few perfunctory nods at complexity, and does have a certain visual interest – but it ends, unironically, with the TV finalists in a singalong of ‘Good Time’ by Owl City and Carly Rae Jepsen, with its reassuring chorus: “We don’t even have to try / It’s always a good time!”. If only.