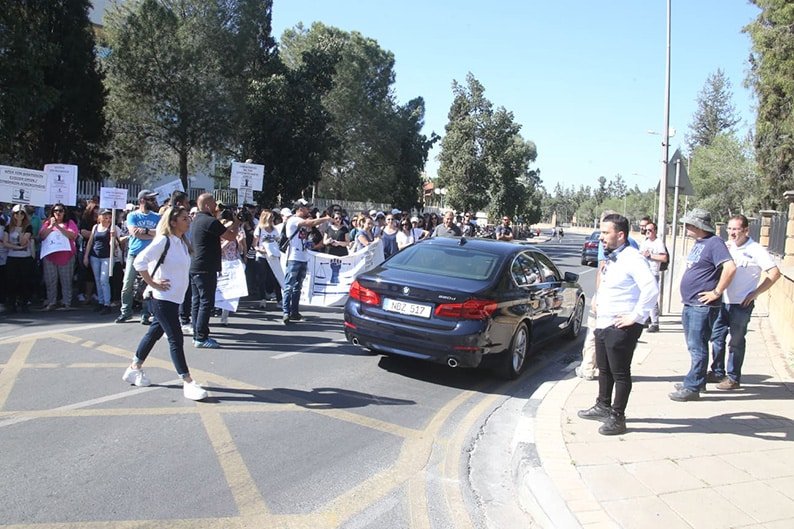 Hundreds of public contract workers called for a meeting with President Nicos Anastasiades and cabinet members during a protest in front of the presidential palace during a cabinet meeting on Wednesday.

This was the third day of the protests, with the contract workers demanding the same treatment as their colleagues with permanent contracts.

During the demonstration police closed the area in front of the palace which caused traffic problems.

After a while, a delegation of three protestors including union head Prodromos Christofi was accepted by the director of the President’s office, Petros Demetriou.

However, Christofi said after the meeting that the delegation gained the impression the government was not willing to make any concessions.

“He [Demetriou] was not empowered to give us any answer, he was generally aware of the issue, we had a brief discussion and asked if it was possible to hold a meeting with the minister of finance,” he said.

“The impression we have is that there is no intention to comply with EU law.”

He said court cases take years and cost a lot of money.

According to Christofi, Isotita, the workers’ union, has already filed 100 cases with the labour disputes tribunal and has filed complaints with the EU and the European Parliament.

Referring to meetings which were held with the finance ministry last week, he said at the time the response of the ministry was also negative.

The protesting workers also demonstrated in front of the finance ministry, the House of Representatives and the Supreme Court in the past two days, with no result.

Asked if they will continue their protests, Christofi said the participating people said protests should increase fivefold, because there is no question that their rights are negotiable.

On Tuesday, the union warned they are likely to start an indefinite strike.

More than 6,000 employees in the central government are affected, and 11,000 in other public organisations.

Malaysian teen believed to have jumped to death after Instagram poll

ITV cancels ‘Jeremy Kyle Show’ after death of a participant