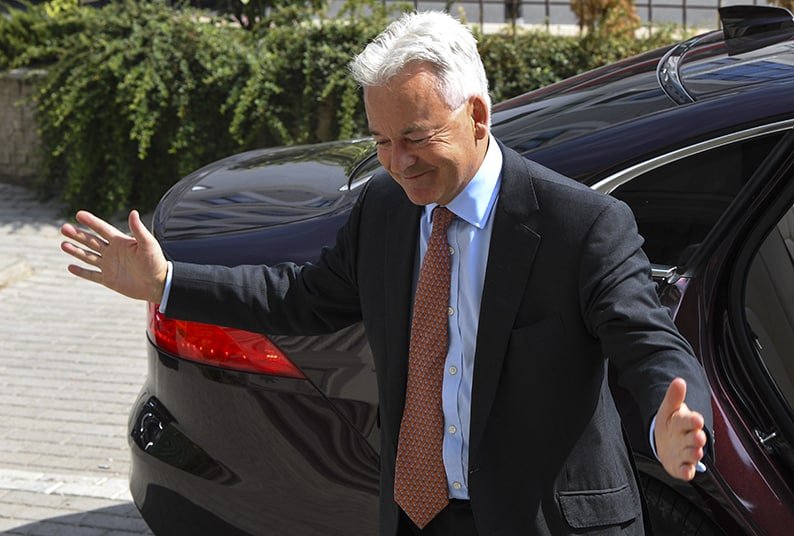 British High Commissioner Stephen Lillie was summoned to the foreign ministry on Wednesday to clarify statements by the UK government on its stance vis-à-vis Cyprus’ exclusive economic zone (EEZ), after appearing to say it was a disputed area.

Speaking after the cabinet meeting on Wednesday, government spokesman Prodromos Prodromou said Nicosia was making its demarches to London through the High Commissioner “on the unfortunate statements” by Britain’s Minister for Europe Sir Alan Duncan.

“The Cyprus government will make official representations to the British government regarding what was said about the Cyprus EEZ,” Prodromou said.

Speaking in the House of Commons, Sir Alan had said on Tuesday that he had met with the Turkish ambassador on Monday “and had a very constructive talk with him”.

“The position of the United Kingdom is that, according to the UN Convention on the Law of the Seas [Unclos], exploratory drilling cannot be conducted in any area in which the sovereignty is disputed,” Sir Alan added. Turkey is not a signatory to the convention.

Prodromou also said that President Nicos Anastasiades would also be writing a letter to British Prime Minister Theresa May on the matter.

Cyprus on Tuesday branded Sir Alan’s comment as unacceptable, as reports surfaced that the Turkish drillship located 60km west of Paphos seemed to be preparing to start drilling in the island’s EEZ as defined by the government in the Exclusive Economic Zone and Continental Shelf Law of 2004 and amendment of 2014.

“Mr Duncan has been and continues to remain unacceptable,” Anastasiades said on Tuesday night.

“I want to believe that the appropriate step will be taken by the [UK[ Prime Minister, because I believe that his whole position does not reflect the correct policy that should be followed by Great Britain, regarding all the interests it has in Cyprus, and the support Britain has received in these critical times it is going through, even if it is from our small country, which has the same vote as the others,” Anastasiades said.

The UK Foreign Office had earlier sought to clarify its position but appeared to confuse the issue further.

In reply to a request on behalf of the National Federation of Cypriots in the UK for clarification on Sir Alan’s statement, the Foreign Office initially repeated the same statement as the British minister saying: “The position of the UK is that, in line with the UN Convention on the Law of the Sea, exploratory drilling should not proceed in any area where sovereignty is under dispute.”

Then, however, the Foreign Office went on to repeat what appeared to be a contradictory statement citing the UK’s long-standing position by saying: “We recognise the sovereign right of the Republic of Cyprus to exploit the oil and gas in its internationally agreed Exclusive Economic Zone. We believe Cyprus’ oil and gas should be developed for the benefit of all Cypriots, as the Foreign Office has said before.”

However, under Unclos. Which Cyprus ratified in 1988, EEZ delimitation agreements with neighbouring countries must be formally filed with the UN. Cyprus signed EEZ delimitation agreements with Egypt (2003), Lebanon (2007) and Israel (2010). Turkey is not a signatory to Unclos, and does not recognise Cyprus so no delimitation agreement exists. “In the absence of such an agreement, the limit of the EEZ is the median line,” Cyprus law states.
As soon as the Turkish drillship Fatih was put in place, the government formally filed the very next day the coordinates for the northern (undelineated) part of its EEZ, something it had not done previously. According to Greek Cypriot media reports, this was because it was advised not to by international experts so as not to inflame tensions in the region.

Energy analyst Charles Ellinas told the Cyprus Mail on Wednesday that formally filing with the UN was a good move by the government.

“Cyprus last week only formally defined its EEZ. It had to send a letter to formally define the whole EEZ. It was an important step and it made sense and they should have done it before,” he said because there were grey areas that needed to be sorted out such as the triangle where Greece, Cyprus and Egypt’s EEZs meet.

“Turkey is creating grey areas and sadly the longer things stay the same the more grey it becomes,” he added.  “As far as the law is concerned. Unclos is really well specified and needs some kind of negotiations. It’s not black and white. It’s not just a matter of defining it. In the end of the day, there is a need for negotiations.”

As for Sir Alan’s comments, Ellinas said he suspected the British minister was not calling Cyprus’ EEZ into question as a whole but only the area where the Fatih was currently located as it has not been delimited. But Turkey disputes the island’s EEZ as a whole and lays claim to parts of Cypriot blocks 1, 4, 5, 6, and 7, and all the way to Kastelorizo and Crete. It also claims parts of Cyprus’ existing licensed blocks on behalf of the Turkish Cypriots. Ellinas said in any case, the Fatih coordinates should not be classed as disputed internationally.

“Duncan overstated areas that are not necessarily disputed,” he said, adding that perhaps the British minister meant that it was Turkey that was disputing it.

Meanwhile, Turkish Foreign Minister Mevlut Cavusoglu on Wednesday said his ministry was informing foreign diplomats as to the drilling situation and “everyone has seen the realities”.

“Despite our warnings – despite the fact that we warned the EU and the international community – the Greek Cypriot administration is conducting unilateral drilling operations without guaranteeing the rights of the Turkish Cypriots,” said Cavusoglu.

“This problem needs to be resolved. Instead of making statements against Turkey, the problem must be solved from its root. And then the hydrocarbons around Cyprus can be evaluated and channelled through Turkey into the international market. If instead of adopting this logical approach they take unilateral steps then we do what we have to do and do.”