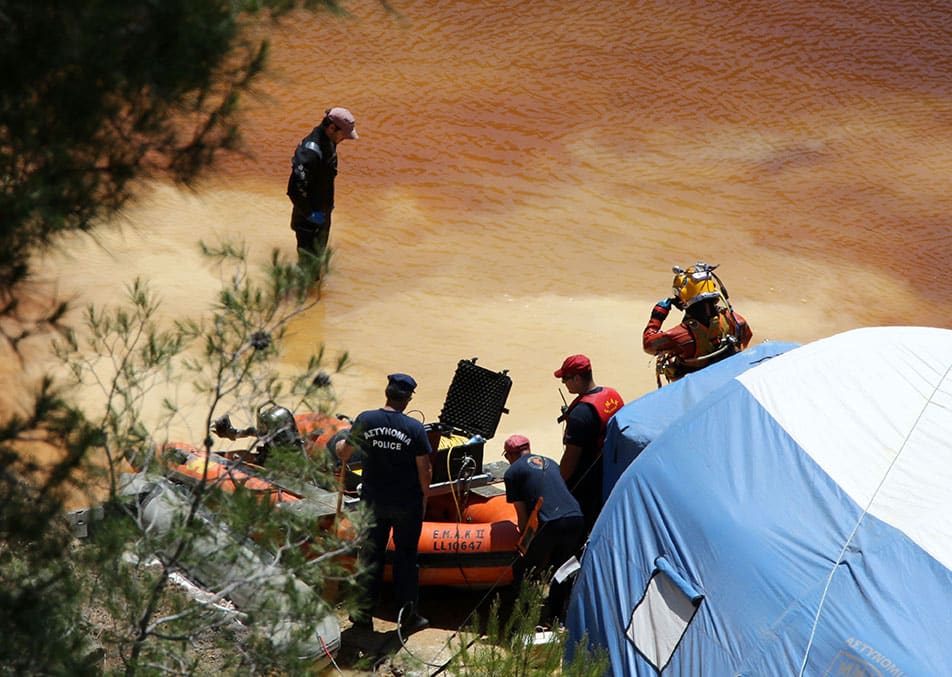 Search crews at the red lake at Mitsero on Wednesday

The police have no reasonable suspicions that the suspected serial killer, 35-year-old Nikos Metaxas, is involved in any further crimes beyond the six murders he has so far included in his confession, the new police chief Kypros Michaelides said on Wednesday.

The seventh death, that of a six-year-old girl, he has said was accidental.

Speaking at a joint session of the House human rights and legal affairs committees, Michaelides said that none of the other 30 women with whom army officer Metaxas was communicating with online is missing.

With an independent police watchdog currently looking into the murders that have shocked the island, Michaelides assured MPs that his intention is to rid the force of any members who did not carry out their duty as they ought to, stating that “should any police officer be found responsible, the axe will fall.”

Michaelides said based on the findings of the probe, the leadership will decide on how to tackle any shortcomings to avoid potential mistakes in the future.

He added that the case will become part of the curriculum at the police academy.

Nicolaou resigned earlier this month over the apparent police failures in investigating the disappearances of the five foreign women and two children who turned out to be the victims of a serial killer.

The president had asked Nicolaou to stay for another two weeks to oversee crucial justice reform bills, Prodromou said, adding that Nicolaou will leave office on June 1.

The minister’s resignation was followed by the dismissal of police chief Zacharias Chrysostomou.

The issue emerged on April 14 after the accidental discovery of a woman’s body inside a mine shaft in Mitsero.

It was followed by the discovery of a second body in the same shaft and the arrest of army officer Metaxas, who has since confessed, according to police, to six murders, five women and one child aged eight. He has denied killing a second child, six, claiming she had choked on her own vomit, before dumping her body in a lake in Xyliatos.

It quickly emerged that three of the women and the two children had been reported missing a couple of years ago but police had not carried out a proper investigation into their fate.

Authorities have since recovered five bodies and are still looking for two more in two lakes in Mitsero and Xyliatos.

Search crews looking for the body of 30-year-old Marricar Valdez Arguiola in the red lake in Mitsero on Wednesday called off efforts for the day after failing to find the suitcase in which the victim is believed to have been placed.

Objects retrieved from the lake by specialist divers at around 6pm were found to be old boxes that are unconnected to the case.

Wednesday’s search targeted the area from which a cement block was retrieved on Tuesday, as the two body-containing suitcases that have so far been retrieved from the lake were accompanied by a cement block which the 35-year-old used to weigh the suitcases underwater.

US pulls staff from Iraq amid concerns over Iran