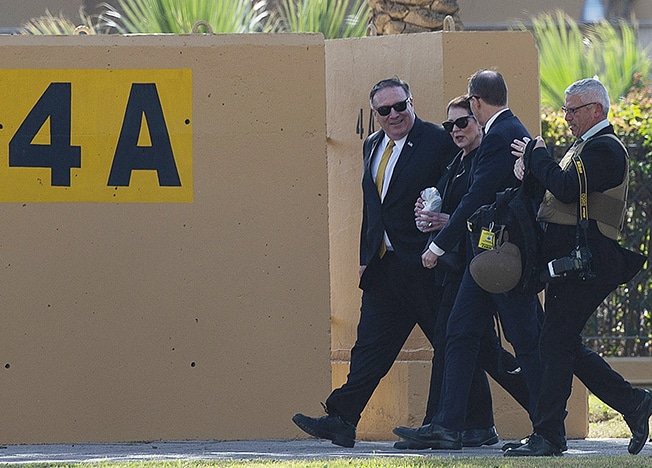 US Secretary of State Mike Pompeo and his wife Susan walk at the US Embassy compound in Baghdad, Iraq

Washington ordered the departure of non-emergency American employees from its diplomatic missions in Iraq on Wednesday in another apparent show of concern about what it describes as threats from Iran.

Helicopters took off throughout the day from the vast embassy compound near the Tigris River, carrying staff out, according to an Iraqi source and a diplomatic source inside Baghdad’s fortified Green Zone. The Iraqi source said U.S. staff were headed for a military base at Baghdad airport.

President Donald Trump’s administration is applying new sanctions pressure on Tehran and says it is sending additional forces to the Middle East to counter what it calls a heightened threat from Iran to U.S. soldiers and interests in the region.

Iran calls that “psychological warfare”, and a British commander cast doubt on U.S. military concerns about threats to its roughly 5,000 soldiers in Iraq, who have been helping Iraqi security forces fight Islamic State jihadists.

The U.S. State Department said employees at both the U.S. embassy in Baghdad and its consulate in Erbil, capital of the semi-autonomous Kurdistan region, were being pulled out immediately due to safety concerns.

It was unclear how many personnel were affected, and there was no word on any specific threat. Visa services were suspended at the heavily-fortified U.S. missions.

“Ensuring the safety of U.S. government personnel and citizens is our highest priority … and we want to reduce the risk of harm,” a State Department spokesman said.

Also on Wednesday, Germany, which has 160 soldiers in Iraq, and the Netherlands which has 169 military and civilian personnel, suspended military training operations, citing increasing regional tensions.

The Dutch embassy in Baghdad said on its Twitter account that it remained open. The French army had no plans to suspend military training activities in Iraq, a source close to the defence ministry said.

Both the United States and Iran have said they do not want war, and Iraqi Prime Minister Adel Abdul Mahdi said on Tuesday he had indications “things will end well” despite the rhetoric.

The United States, which occupied Iraq from 2003-2011 after invading to topple dictator Saddam Hussein, sent troops back there in 2014 to help fight Islamic State. Iran has close ties to powerful Iraqi political parties and supports powerful Shi’ite militia groups.

“I think we are now in a quite dangerous situation where a miscalculation by either side could lead us into conflict,” U.S. Senator Chris Coons, a Democrat on the Senate Foreign Relations Committee, told CNN in an interview on Wednesday.

“When you project force into a very volatile region and you’ve got real tension between Iran and the Saudis — we have to be careful. We need a strategy,” Coons said, echoing a call by Congress for the government to brief lawmakers.

The State Department reissued a travel advisory for Iraq saying U.S. citizens were at high risk of violence and kidnapping.

A senior Iranian official said on Wednesday that any conflict in the region will have “unimaginable consequences.”

The Trump administration withdrew a year ago from an agreement between Iran and global powers to lift sanctions on Tehran in return for curbs to its nuclear programme. Washington reimposed sanctions last year and has tightened them this month, ordering all countries to halt all imports of Iranian oil.

Iran has responded by announcing some loosening of curbs to its nuclear programme, but remains within the restrictions of its deal.

Police do not expect any more Metaxas victims