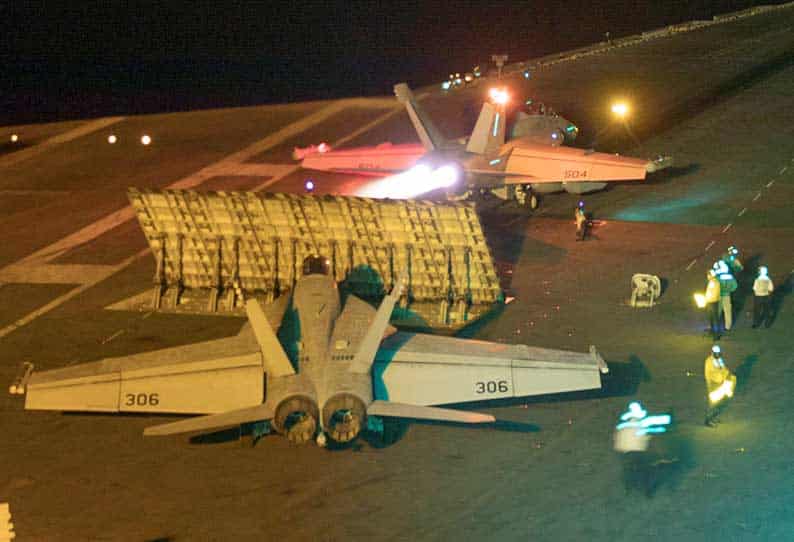 An F/A-18E Super Hornet launches from the flight deck of the Nimitz-class aircraft carrier USS Abraham Lincoln in the Red Sea, May 10, 2019

DONALD Trump is well known for his desire to cut American military commitments overseas. Indeed, it is one of his most attractive characteristics. But his attention span is short, he plays a lot of golf, and he does not have the knack of choosing good advisers.

His main domestic advisers on the Middle East are Vice-President Mike Pence, Secretary of State Mike Pompeo, and National Security Adviser John Bolton, all hawks on Iran. His closest allies in the region itself are Israeli Prime Minister Binyamin Netanyahu and Saudi Crown Prince Muhammad bin Salman, both of whom can wrap him around their little fingers. And they both want the United States to attack Iran for them.

Donald Trump doesn’t want a war with Iran. He has an extra-strength version of the usual Washington obsession with Iran, as irrational and ineradicable as the parallel obsession with Cuba – the United States will forgive and forget anything except humiliation – but he imagines Iran can be bullied and bluffed into submission. His ‘advisers’ are not that naive.

This is not to say that Pence, Pompeo or even Bolton prefers war to any other outcome of the current confrontation. They would rather see the sanctions they have imposed on Iran, which are strangling the economy and causing great hardship, lead to a popular uprising and regime change. Fat chance.

It’s the ever-popular moral mistake. WE would never yield to such blackmail, because our cause is just and our will is strong. THEY will crumble before the same threats because they are weak and they must secretly know they are in the wrong.

But if the Iranians perversely refuse to overthrow their government, then PP&B would accept war as the next-best outcome. Bolton might actually welcome it, and may already be involved in manipulating the intelligence to justify such a war in the same way he did in the run-up to the invasion of Iraq in 2003. (He called a rather peculiar early-morning  meeting at CIA headquarters last week.)

Unfortunately, but unsurprisingly, some players in Iran now appear to be pushing back against the American pressure. They are probably hard-liners associated with the not-so-loyal opposition to President Hassan Rouhani’s ‘moderate’ government (moderate in the sense that he doesn’t want nukes and does want trade with the West), and they may just have given the American warhawks something to work with.

If push came to shove, Iran’s one available counter-weight to overwhelming US military strength would be to threaten the tanker traffic that carries 20 percent of the world’s crude oil and LNG out of the Gulf. The ‘choke point’ is the Strait of Hormuz, between Iran’s south coast and the United Arab Emirates, where the navigation channels narrow to three nautical miles wide in each direction.

On Sunday, there was a ‘sabotage attack’ on four merchant ships at anchor off the UAE port of Fujairah, just outside the Strait of Hormuz, where tankers often wait to be refuelled. Two at least were Saudi tankers.

Something holed all four ships at the waterline, and the instant suspicion was that some Iranian group is reminding everybody that Iran can close down the Strait if it is attacked. Or at least that it could do enough damage to drive insurance rates on cargoes transiting the Strait into the stratosphere.

But it might not be an Iranian group at all. It could be an American or Israeli or Saudi intelligence operation seeking to create a pretext for a US attack on Iran (like the ‘Gulf of Tonkin incident’ created a pretext for the US to start bombing North Vietnam in 1964). You have to keep an open mind on these things, unless you believe that intelligence agencies never lie.

At any rate, an actual war against Iran now seems much closer than it did last week. The long-planned transfer of another American aircraft carrier into the Gulf is now being re-framed as an emergency response to a new (but unspecified) Iranian threat. B-52 bombers that could easily reach Iran from their current bases are being ostentatiously flown into the Gulf. Mike Pompeo makes an unscheduled four-hour visit to Iraq.

If the United States does attack, nobody will help Iran, even though every other signatory to the no-nukes treaty that Trump trashed knows (and says) that Iran has complied with its terms. And the US would only bomb Iran, not invade it on the ground.

But then it would spread: mines in the Strait of Hormuz, missile attacks on Israel by Hezbollah, maybe an uprising by the Shia minority in Saudi Arabia. Lots of death and destruction, and no possibility of a happy outcome.

I really don’t think this is what Donald Trump wants. Maybe somebody should tell him.

Villa into playoff final after shootout win over West Brom