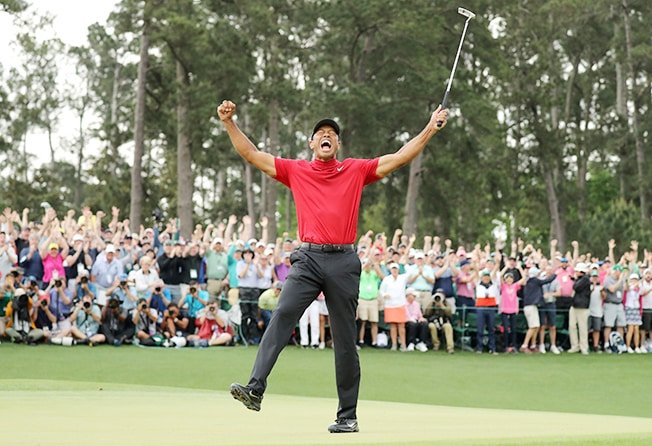 Tiger-mania is back in full force after the former world No.1 ended his 11-year major drought by winning the Masters last month

Defending champion Brooks Koepka is the one to beat at this week’s PGA Championship even if Tiger Woods will have the boisterous New York galleries on side as one of golf’s four major tournaments begins a new era in the spring.

After being held since 1972 in the dog days of summer, the PGA Championship’s move to May should ensure milder weather and more attention from U.S. sports fans whose thoughts by August have invariably turned to American football.

For the first time ever in a major championship, every player ranked in the top 100 in the world will tee it up, barring late withdrawals.

The field will comprise 156 players, but 155 of them will be in the supporting cast as one man takes centre stage.

Tiger-mania is back in full force after he ended his decade-plus major drought by winning the Masters last month, and Woods is one of the favourites on a course where he lifted the U.S. Open trophy in 2002.

But big, brawny Bethpage, a 7,459-yard course in Farmingdale on Long Island, is arguably less suited for his 43-year-old game than the other major venues this year.

While not short off the tee, Woods is no longer among the game’s biggest hitters after his 2017 spinal fusion.

Fifty players are averaging 300 yards or more on the PGA Tour this year.

Woods, at 299 yards, is respectable, but gone are the days when he could overpower a course.

He now gets the job done the old fashioned way, by relentlessly hitting greens in regulation. At 75 percent, Woods is the year’s best on tour at it, which could prove decisive at Bethpage.

Legitimate title chances will line up like jets at nearby JFK airport, but anyone with designs on winning will likely have to contend with the quiet assassin Koepka, who for all his dominance in recent majors remains less than a crowd favourite.

Koepka and Woods have developed a close rivalry at the majors, with Koepka heading a 1-2 finish at the PGA at Bellerive before Woods turned the tables at Augusta, where he clinched his 15th major title.

The stoic Koepka does not stand out as superior in any single category of the game, but is good across the board, and his mind is perhaps his best weapon, seemingly immune to pressure.

PUTTING TO MAKE OR BREAK McILROY

Others with the goods to contend include Europeans Rory McIlroy, Justin Rose, Jon Ram and Tommy Fleetwood, and Americans Dustin Johnson, Justin Thomas and Rickie Fowler.

McIlroy would likely be the outright favourite if he were not coming off another disappointing Sunday, the latest in the final round at the Wells Fargo Championship, where he shot an error-strewn closing 73.

His putter let him down at Quail Hollow, not for the first time. If the Northern Irishman can get that right he can win at Bethpage.

Rahm, coming off victory in the two-man teams event at the Zurich Classic, is tipped to win a major sooner or later.

The 2016 U.S. Open winner Johnson needs to add to his single major triumph if he wants to end his career with a haul his talent deserves.

However difficult predicting the winner, expect one of the big names to come through, just like the last time the PGA Championship was held on Long Island in 1926.

It was won then by one of the greats of the era, the legendary, hard-partying Walter Hagen.

This week’s purse has not been announced but it will be about $11 million more than 93 years ago.