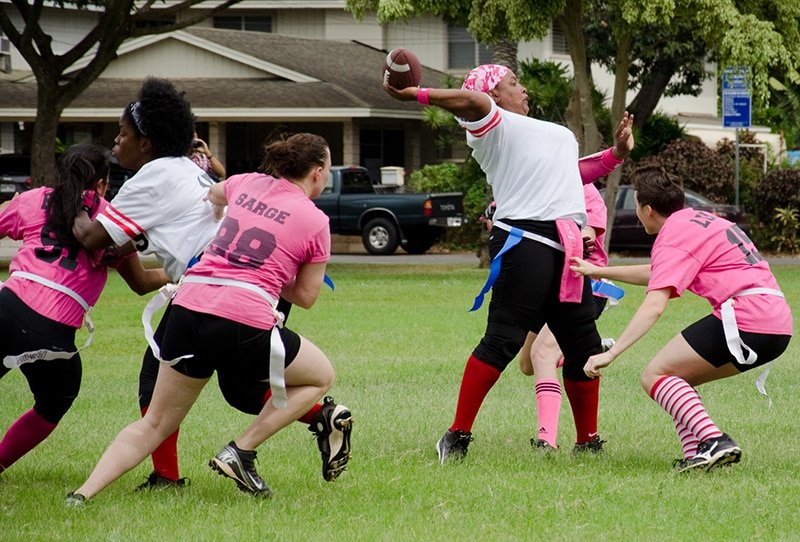 Despite our mighty Moufflons (did you know the national team holds the world record for most consecutive international rugby union wins?) rugby is not a popular sport here on the island. Football and basketball are the be-all and end-all in Cyprus, volleyball and handball are runners-up, and motor sports and sailing get the occasional mention thanks to the Cyprus Rally and Pavlos Kontides (respectively and respectfully). But rugby is not A Big Thing, even for the men. And women’s rugby generates the same sort of interest as – say – professional toast making. That, however, is all about to change…

Thanks to a joint effort by the Australian High Commission and Cyprus Girls Can, this coming Sunday sees an event to encourage women of all ages to try out Women’s Touch Rugby.

“Touch Rugby is great fun to play and hugely popular in Australia,” says Natalie Kyriacou of Cyprus Girls Can, a campaign which encourages women and girls to become more active and involved in sport. “Through the kind support of the High Commissions of UK, India, Sri Lanka, and Canada as well as the Royal Commonwealth Society and Deryneia Municipality, we’re aiming to showcase the values of the Commonwealth: inclusion, peace, cooperation, gender equality, sports diplomacy.

“As well as the physical health benefits of taking part in sport, being sporty can also build confidence and empower women to step outside their comfort zone. Being active allows you to connect with – and learn to respect – your body and playing in a team helps form friendships and builds connections with other communities.”

So, what is it exactly that adds the titular touch to rugby? According to organisers, touch rugby is a minimal contact sport in which your team aims to score more touchdowns than your opponents. “Touch is a minimal contact sport which combines running, agility, passing, catching and communication,” says Natalie, explaining that the goal is to place the ball in one’s opponent’s Touchdown Zone. “There is NO tackling, lineouts, scrumming or kicking involved, making it ideal for all ages and abilities, from juniors to masters and from slight to heavy builds.

“Teams play with six players on the field at any one time, moving the ball down the field toward their `touchdown zone’, without passing the ball forward, dropping the ball on the ground or kicking it. Each team,” she clarifies, “has six ‘touches’ before they need to handover the ball to their opponents. When touched an attacker must stop and `roll the ball’, unless it is the sixth touch.”

If that all sounds a little complicated, don’t worry. Beginners are very welcome and an expert will be on hand to run everyone through the basics before the practice activity and a mini matches – friendlies, of course, because, as Australian High Commissioner Sam Beever explains, there’s much more to this event than just an opportunity to try a new sport…

“We chose Greater Famagusta as our target to engage the much forgotten part of the island,” he expounds. “And now with the checkpoint open, it is part of the reinvigoration of the region. Women lead the way in rapprochement and peace building; their voices need to be heard, especially in this region,” he adds, referencing the Commission’s ongoing inclusivity efforts, which have included the ‘Deconstructing Masculinities event at CVAR, the Leave No Woman Behind initiative, and the hosting of last month’s Women in Conflict Zones book launch.

This inclusivity is also the reasoning behind the date of the event. “Holding Women’s Touch Rugby on a Sunday allows not only Greek Cypriot and Turkish Cypriot women to attend and participate, but all women living in Cyprus,” he reveals. “We’re reaching out to the island’s domestic workers too.” To this end, free buses from the major towns have been organised, with pick-up points in Nicosia, Larnaca, Pyla, Famagusta and, should needs require, from Limassol.

“The event will be,” the High Commissioner adds, “a really fun day! Not only are we tackling issues such as female empowerment, multiculturalism, bicommunalism and sports diplomacy, we’re also highlighting Commonwealth cooperation. There will,” he adds, “be other events in the future across the island which promote the same concepts. But for now, sign up or come down to enjoy this Sunday’s fun at the Women’s Touch Rugby event!”