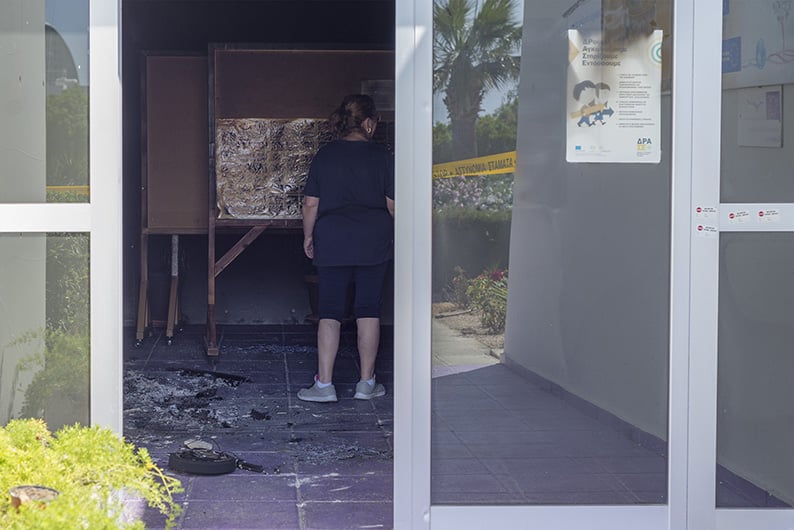 Fire damage at the Linopetra gymnasium on Thursday

The staff room of the Linopetra gymnasium, where a teacher was caught on video slapping a female pupil earlier in the week, was set on fire on Thursday.

The flames were spotted by the school’s cleaner at 6.30am.

Examining the scene, the fire service said that the fire was set deliberately after the culprits first set fire to a rubbish bin, which was then placed at the entrance of the building.

The extent of the damage caused by the fire is still unclear.

Visiting the Limassol school on Thursday morning, Education Minister Costas Hambiaouris chaired a meeting attended by the management and board of the school, the police, the parents’ association and education unions and organisations.

The parties unanimously agreed that they would avoid inflaming what has clearly become a highly charged issue and make no further statements regarding violence and delinquency in schools for the time being.

Measures taken to deal with the incident were also discussed.

On Wednesday, the education ministry ordered a disciplinary probe into the incident on Tuesday when the teacher was caught on video slapping a female pupil.

The video, released to the media, shows a second-grade female pupil trying to pull an item out of the hand of a man who appears to be the teacher and him slapping her on the face. The pupil then hits the teacher on the hand, asking him why he hit her. He is then heard telling her to go away, warning her that he would hit her again.

According to the head of the education ministry’s Limassol district offices, Stelios Theofilou, on Wednesday, the rules allow the teacher to continue teaching at the school until the results of the probe are ready.

In a further escalation of events, the vice-president of secondary school teachers’ union Pantelis Nicolaides reported in a Facebook post on Wednesday that the father of the pupil, upon hearing that the principal of the school had punished the pupil who filmed the incident for using a mobile phone in school, “stormed into the Limassol school and like a raging bull attacked the principal of the school”.

In statements to reporters following the meeting on Wednesday, Hambiaouris condemned such behaviour, and said that enforcing a moratorium on statements regarding violence in schools “does not mean that we will not be serious about resolving any problems that arise”.

“As of tomorrow we will be revisiting the regulations governing the operation of schools, which we have all agreed contain some provisions that can be changed in order to be able to improve the situation,” he said.

Beyond this, Hambiaouris continued, “the culture in schools must change, and this is also something we will be looking into.”

Hambiaouris added that measures have already been taken at the Linopetra.

The first involves placing a security guard on the school grounds, while additional measures will be proposed by the end of Thursday by the management, teachers and parents of the school.

Regarding the issue of the use of mobile phones in schools, which arose from the video recording of the teacher which set off the current issue, Hambiaouris said that “everything will be studied.”