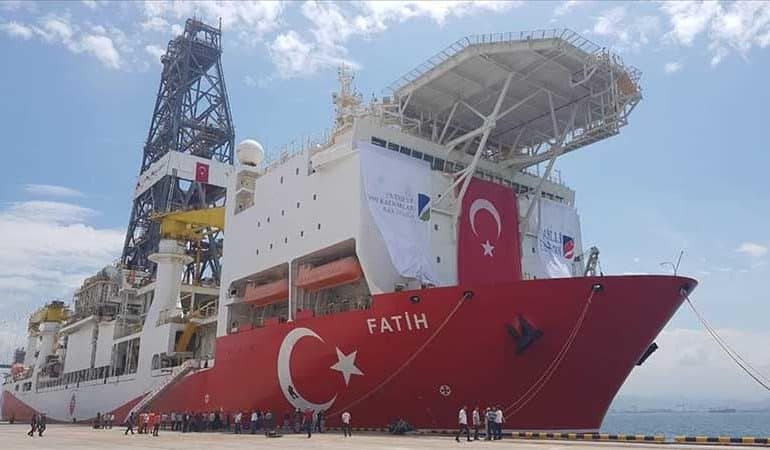 LONDON declined on Thursday to walk back earlier remarks by British Minister for Europe Sir Alan Duncan about ‘disputed’ maritime areas around Cyprus, comments that have caused a rift with Nicosia.

In a new statement, the UK Foreign Office said it had called on Turkey not to drill in the area off Paphos where it has positioned its drillship Fatih “where sovereignty is under dispute.”

The Foreign Office noted the UK was following developments in the eastern Mediterranean with concern. “We would like to see the situation deescalated,” it added.

“With reference to Turkey’s planned drilling, as the Minister for Europe and the Americas stated on 14 May, the position of the UK is that, in line with the UN Convention on the Law of the Sea, exploratory drilling should not proceed in any area where sovereignty is under dispute. We have called on Turkey not to drill in this area.”

“The UK continues to believe that Cyprus’ oil and gas should be developed for the benefit of all Cypriots.”

Meanwhile, President Nicos Anastasiades expects the United Kingdom’s position on the issue of Cyprus’ exclusive economic zone (EEZ) to be in line with international law and the UN Convention on the Law of the Sea, government spokesman Prodromos Prodromou said.

Anastasiades was said to be considering writing to British Prime Minister Theresa May.

Asked about Nicosia’s representations to London over the latter’s stance on the issue of Cyprus’ EEZ and if Cyprus will ask the British side to make their position clear, Prodromou stated: “The President of the Republic expects of Britain to have a position in line with international law, the UN Convention on the Law of the Sea and of course in line with the position expressed from the very beginning by the UK Foreign Secretary, in line with the EU general position, announced by the European Commission’s Vice President Ms Mogherini.” Mogherini has called on Turkey to refrain from illegal actions in the EEZ of Cyprus, show restraint and respect the sovereign rights of the Republic.

Cyprus made representations to the UK on Wednesday following a statement by Sir Alan before the House of Commons, that exploratory drilling for hydrocarbons should not be taking place in areas where sovereignty is “under dispute.”

On Wednesday evening, Anastasiades told the UN special envoy to Cyprus that Turkey’s violation of the Republic’s sovereign rights in its EEZ prevents the resumption of peace negotiations.

In a phone call with Jane Holl Lute, the president stressed that the EEZ violation undermines attempts to foster an appropriate [political] climate.

According to the government spokesman, Anastasiades “reiterated to Lute for the umpteenth time the readiness of the Greek Cypriot side to participate in a new round of talks for a viable and functional solution to the Cyprus problem, on the basis of UN resolutions, EU acquis, and the six parameters proposed by the UN Secretary-General Antonio Guterres.”

For her part, Lute told Anastasiades that she remained determined, on the basis of instructions given by Guterres, to help create appropriate conditions for the resumption of reunification talks.

Sir Alan himself has reportedly expressed his frustration over the intense criticism addressed personally to him by Nicosia.

Cyprus’ high commissioner to the UK, Euripides Evriviades, met with Sir Alan on Wednesday afternoon at the Foreign Office in London to convey his government’s strong objection to the minister’s remarks.

Later in the evening energy minister Giorgos Lakkotrypis told a London audience of investors and entrepreneurs that Turkey’s incursion into the EEZ was “not the first provocation we are having, but by far the most serious one.”

“The spot where Turkey is trying to drill is 37 nautical miles off the coast of Cyprus. I wonder if anyone under any circumstances through the UN Convention on the Law of the Sea (Unclos) can consider this area, 37 nautical miles from the coast, a disputed area,” he said pointing to a map of Cyprus’ EEZ.

Foreign Office sources have said that Tuesday’s statements by Sir Alan and by officials should leave no doubt about the UK’s position.

A clarification issued on Tuesday evening by the Foreign Office stated that the UK recognises the sovereign right of the Republic of Cyprus to exploit oil and gas in its “internationally agreed” EEZ.

But the area where Turkey is threatening to start drilling has not been delineated, therefore under the law of the sea it is considered still ‘under dispute,’ the British argue.

The sources told the Cyprus News Agency that Sir Alan’s statement in fact amounted to a call on Turkey to desist from exploratory drilling in that area, since the UN Convention on the Law of the Sea prohibits such activity “in an area where sovereignty is under dispute.”

Diplomatic sources disputing the British argument note that the UK has not condemned the Turkish incursion into the Cypriot EEZ as it ought to and as other western countries have done.

Furthermore, international energy experts in London underlined that the maritime areas in question have not been delineated precisely due to Turkey rejecting prior Cypriot overtures to discuss the matter.

Turkey, it was further noted, is the sole country that votes every year against the Omnibus Resolution of the Law of the Sea item at the General Assembly of the United Nations.

Meanwhile, Conservative and Labour MPs have written to Sir Alan urging him to unequivocally condemn the Turkish incursion into Cyprus’ EEZ and to declare London’s support for Nicosia’s right to exploit the natural resources in all its EEZ. The MPs include Sir Roger Gale, Theresa Villiers and Fabian Hamilton.

Macron urged by filmmaker to watch tale of police violence

Johnson to stand as next UK Conservative leader