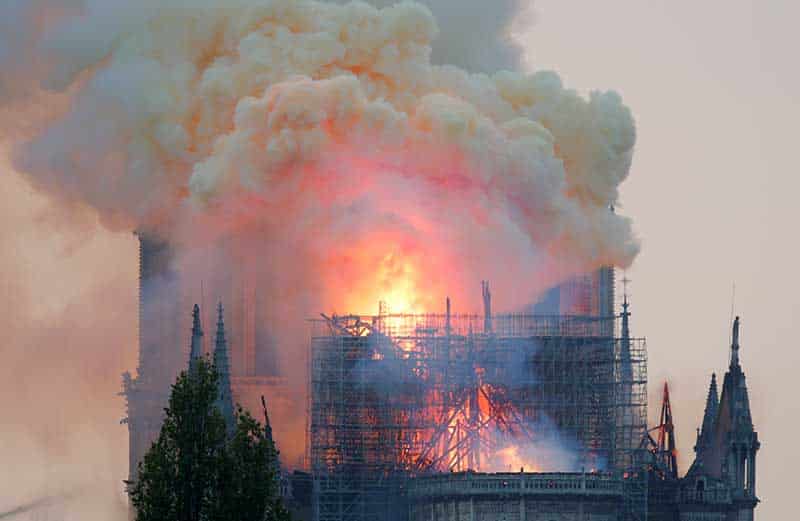 The fire ripped through the mediaeval cathedral on April 15, destroying the roof, toppling the spire and almost bringing down the main bell towers and outer walls before firefighters brought it under control

The European Union has launched a coordinated fight against fake news ahead of this month’s European Parliament elections, but officials acknowledge there are limits to what can be achieved against a danger barely recognised a few years ago.

The risk is “very high”, said Lutz Guellner, one of the EU’s top officials in charge of the anti-disinformation campaign. “Just look at the past, the U.S. elections, what happened in France, Germany.”

By funding fact-checking organisations, building up an in-house unit to counter disinformation from Russia, and enlisting Facebook, Google, Twitter and others, Brussels hopes to shield the 427 million people eligible to vote for the 751-seat EU chamber on May 23-26.

Facebook opened a fake news war room in late April, later showing journalists around the Dublin facility, but security experts say that may be too late to uproot the seeds of doubt planted by malign campaigns to undermine one of the world’s biggest elections.

EU officials say they cannot quantify the impact of their efforts. They suffer from limited funding and institutional restraints, and are only just coming to terms with the scale of the problem. “The EU can’t have a Ministry of Truth,” said one senior EU official.

Despite the pan-European nature of the risks, the vote is held as separate elections in each of the 28 EU countries, some of which have been slow to put in place safeguards.

In a case that forced EU officials to pay attention to the real-world impact of fake news, a story in 2016 about a Russian-German girl reportedly raped by Arab migrants sparked a media storm until Germany’s intelligence service established it as a Russian attempt to manipulate German public opinion.

WHO SET FIRE TO NOTRE DAME?

By alerting people to examples of disinformation, the EU, like other Western governments, hopes to “inoculate” citizens against fake news, according to Heidi Tworek, a expert on information warfare at the University of British Columbia.

“Potentially we will be able to win, but not yet, because we have neglected this for so long,” Lithuania’s Foreign Minister Linas Linkevicius told Reuters.

Turnout for European Parliament elections is traditionally low, making it easier for far-right and far-left groups to focus on voters favouring extremist parties via social media.

Russian media in Europe, while not successful in reaching the broader public, provides a platform for anti-EU populists.

Fact-checkers in Germany called out a fake news article circulated on Facebook about Frans Timmermans, the Socialists’ top candidate in the European elections. The report falsely claimed he wanted “mass immigration of Muslim men to Europe”.

By threatening regulation, the EU has persuaded Google and Facebook to verify election advertising on its sites, while the companies, along with Twitter and Firefox web-browser Mozilla have agreed to submit monthly reports as part of an EU code of practice.

Google said that in February it detected almost 21,000 EU-based Google Ads accounts that violated its new rules and sought to mislead or scam users, including 4,200 in Italy alone,

Facebook’s fact-checking operation is working with 21 partners in 14 European languages. When a story is flagged as false, it is downgraded on the social network’s news feed and pages that repeatedly share fake news can be blocked.

But the company says such efforts have their limits. “There’s so much shared on Facebook every day that it won’t be possible to fact check every single piece,” said Antonia Woodford, Facebook’s product manager.

In some EU nations, such as Hungary, there are no fact-checkers, and groups partnered with Facebook complain about the lack of data on the impact of their work, particularly as fake news spreads quickly across different platforms and countries.

“It does move pretty quickly,” said Phil Chetwynd, global editor in chief at Agence France-Presse, which is partnered with Facebook. “In most of the locations where we have put fact-checkers, we have been surprised by the scale of what we have been discovering.”

The older generation is particularly vulnerable, with people over 55 most likely to spread fake news because they grew up with the printed word and assume published information to be bona fide, EU officials say.

Many EU governments have yet to set up their own disinformation monitoring command posts. A much vaunted EU ‘Rapid Alert System’ meant to bring national specialists together to fight disinformation is barely used. “It’s a non-rapid, non-alert, non-system,” an EU official said.

However, the EU hopes that a collective effort will at least raise the costs for anyone trying to interfere. “If someone wants to do it, it will still be possible,” said Heli Tiirmaa-Klaar, Estonia’s ambassador at large for cyber security.

Event to introduce a touch of rugby for women

France frees man who was held over suspected Khashoggi link