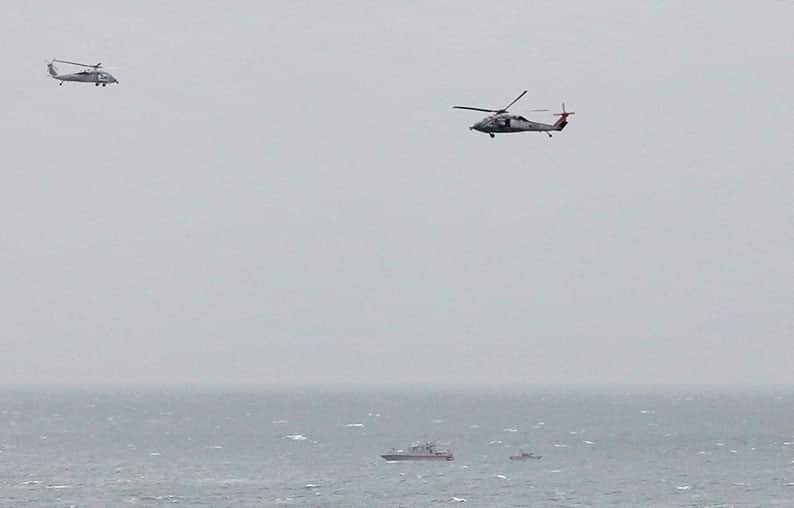 A Iranian Revolutionary Guard boat is seen near the US aircraft carrier USS George H W Bush in the Strait of Hormuz as US Navy helicopters hover nearby on March 21, 2017

Iran said on Friday it could “easily” hit US warships in the Gulf, the latest in days of sabre-rattling between Washington and Tehran, while its top diplomat worked to counter US sanctions and salvage a nuclear deal denounced by President Donald Trump.

Tensions have escalated in recent days, with growing concerns about a potential US-Iran conflict. Earlier this week the United States pulled some diplomatic staff from its embassy in Baghdad following weekend attacks on four oil tankers in the Gulf.

“Even our short-range missiles can easily reach (US) warships in the Persian Gulf,” Mohammad Saleh Jokar, the deputy for parliamentary affairs of the elite Revolutionary Guards (IRGC), was quoted by Fars news agency as saying.

“America cannot afford the costs of a new war, and the country is in a bad situation in terms of manpower and social conditions,” he added.

Washington has increased economic sanctions and built up its military presence in the region, alleging threats from Iran to its troops and interests. Tehran has described those steps as “psychological warfare” and a “political game”.

Supreme Leader Ayatollah Ali Khamenei said this week Tehran would not negotiate another nuclear deal after Washington last year quit a 2015 international pact that put curbs on Iran‘s nuclear programme in exchange for the lifting of international sanctions.

Trump believes the economic pressure will force Tehran to accept tougher curbs on its nuclear and missile programs and on its support for proxies in Iraq, Syria and Yemen. He has said publicly he wants to pursue diplomacy after quitting the deal and moving to cut all Iranian oil exports.

Foreign Minister Mohammad Javad Zarif, on a visit to Japan and China, said the international community and remaining signatories of the nuclear deal should act to save the accord as “supportive statements” are not enough.

Last week, Iran notified the five remaining signatories that it would reduce some commitments under the 2015 deal. Tehran has asked the other signatories, including Germany, Britain and France, to help protect its economy from US sanctions.

“Safeguarding the (nuclear accord) is possible through practical measures, and not only through supportive statements,” Zarif was quoted as saying by the state news agency IRNA.

“If the international community feels that this (nuclear) accord is a valuable achievement, then it should take practical steps just like Iran does,” Zarif said on Iranian state television. “The meaning of practical steps is fully clear: Iran‘s economic relations should be normalised.”

Iran‘s economy is expected to shrink for the second year running and inflation could reach 40 percent, an International Monetary Fund senior official said last month, as the country copes with the impact of tighter US sanctions.

The curbs under the nuclear deal were aimed at extending the time Iran would need to produce a nuclear bomb, if it chose to, to a year from roughly 2-3 months.

The United States and the UN nuclear watchdog believe Iran had a nuclear weapons program that it abandoned. Tehran denies ever having had one.