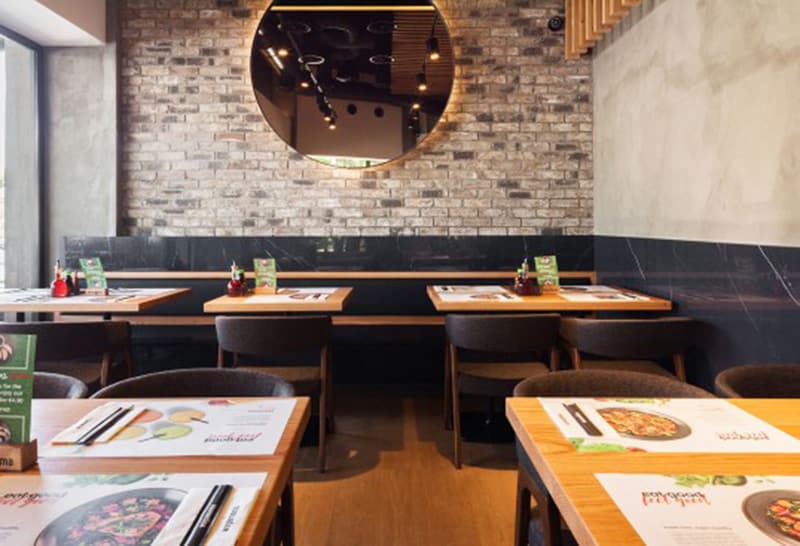 I’m sure that most people would not like to associate themselves with self-centeredness and disobedience or even a naughty child! Be that as it may, that is what you are unwittingly signing up for when you visit Wagamama as that is the meaning of the name! An international chain, Wagamama was established in the UK in 1992, and has recently expanded to Larnaca and using the philosophy of kaizen (self improvement) we should hopefully expect it to improve over time!

Located on the corner of Grigori Afxentiou and Stylianou Lena it isn’t exactly in the middle of town and parking can prove to be a bit of a challenge!

Walking in to Wagamama’s, everything is near perfect. The tables are all laid identically, each table as shiny as the next. It just looks impeccable.

The restaurant was fairly empty when we arrived so we were able to choose a good table. The waiter picked up a couple of menus on the way to showing us to our table so that he could hand them to us as soon as we sat down. He politely asked if we wanted anything to drink before leaving us to our own devices.

The menu has a very wide variety of dishes. Curry, Ramen, Teppanyaki, sushi and salads, it seems to have it all! Most dishes can be made with a choice of beef, chicken or tofu. I decided to go for the edamame as a starter and a chicken Samla curry, a slightly spicy lemongrass and coconut flavoured dish served with steamed rice. My partner chose crispy ebi maki, without chives, as a starter and a fairly new dish called Kare Burosu which is tofu and mixed mushrooms served on udon noodles with a curried vegetable broth. To add a kick, my partner requested chilies to be added to the dish. When confirming the order, the waiter wrote what we had ordered on the paper place mat in front of us so that whoever brought the food over would know what dish goes where. We were also informed that the food will just come out as and when, so it wouldn’t necessarily be all coming out together.

First to arrive at the table was my steamed edamame. The chunks of salt on the outside of the edamame made them highly addictive. They were just as I had hoped them to be. Perfect. Off to a good start. Not too long after the ebi maki arrived. As requested, it was made with no chives in the actual maki roll. However, the maki was garnished and completely covered with chives, which kind of defeated the purpose of making the initial request. Despite this, the maki was very tasty. The crispy panko prawn was still warm so it had a crisp, crunch. However, it wasn’t packed tightly when made and as a result, it started coming apart when dipped in the soya sauce!

No sooner had we finished the starter the main dishes arrived. My massive bowl of creamy coconut curry looked fabulous. A yellow sauce was brightened up by the bright red tomatoes and plush green coriander. I couldn’t wait to tuck in. It was a little spicy initially but I soon got used to it. Exactly what I had hoped for, I thoroughly enjoyed the dish. The rice that came with the curry looked like a small portion but turned out that it was much more than I even needed! I was assured that the Kare Burosu was also very tasty. However, the chilies that were requested were not actually added to the dish as was hoped for. Instead they brought a little pot of freshly cut up chilies and served it alongside. Not exactly what we had in mind but it turned out to not make that much of a difference in the end.

After we finished we were both absolutely stuffed and couldn’t fit in another mouthful. As a result, we skipped on dessert despite being very tempted by the white chocolate ginger cheesecake.

If you want to experience Wagamama food but aren’t feeling like leaving the house, they also offer a delivery service. It was also good to see that there was ramp access to the restaurant to cater for the disabled. Despite a couple of little things not going as expected, the food was tasty and the staff were friendly so I would definitely go back. Next time I might just be a naughty child and order that cheesecake!

WHEN Daily from noon

Cypriots hold negative view of UK, UN, positive on EU, Russia and US