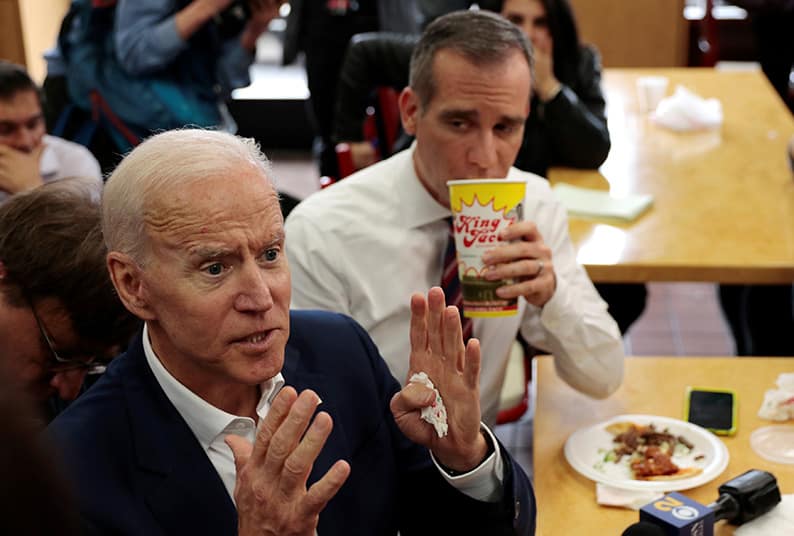 Former U.S. Vice President Joe Biden on Saturday will hold a presidential-style rally intended to make his march toward becoming the Democrat to take on President Donald Trump seem inevitable, even as rivals search for ways to slow him down.

Since entering the race last month, Biden, 76, has largely ignored the other 23 contenders in the Democratic field, instead training his fire on Republican Trump.

Trump, in turn, has regularly knocked Biden, making the 2020 presidential contest sometimes feel like a general election more than a year before the vote takes place.

Biden’s outdoor rally in Philadelphia, where he has established his campaign headquarters, illustrates the importance of Pennsylvania to Democratic hopes next year. Trump narrowly won the state over Hillary Clinton in 2016.

After Biden leaves, Trump will hold an event of his own on Monday in the northeast part of the state.

In his remarks, Biden will attempt to reach out to Republicans and independent voters as well as Democrats by striking a moderate tone.

“Some say Democrats don’t want to hear about unity. That they are angry, and the angrier you are, the better,” Biden will say, according to excerpts of his address released in advance. “That’s what they are saying to have to do to win the Democratic nomination. Well, I don’t believe it.”

And as he has done during his campaign, he will directly confront Trump.

“If the American people want a president to add to our division, to lead with a clenched fist, closed hand and a hard heart, to demonize the opponents and spew hatred – they don’t need me,” Biden is expected to say. “They already have a president who does just that.”

Biden will not have the luxury of shrugging off the rest of the Democratic field much longer. While opinion polls show him with a substantial lead, other candidates have begun targeting him.

An emerging antagonist has been U.S Senator Kamala Harris, who this week mocked calls by Biden supporters that she join him on the Democratic ticket as vice president. Harris said it should be the other way around.

“I think that Joe Biden would be a great running mate,” Harris told reporters. “As vice president, he’s proven that he knows how to do the job.”

Biden, a U.S. senator for 30 years and a two-term vice president under Barack Obama, has argued he is best positioned to take on Trump next year.

The remark by Harris underscored the tension that runs through the Democratic Party as its activist wing grapples with the notion of nominating a moderate white male such as Biden rather than a progressive woman such as U.S. Senator Elizabeth Warren or person of color like Harris.

MIDDLE OF THE ROAD?

Democratic nominating contests begin next February, giving the dynamics of the race plenty of time to shift. But Biden has opened up a more than 20-point lead over his nearest rival, U.S. Senator Bernie Sanders, in several public opinion polls.

In New Hampshire this week, Harris took issue with Biden’s assertion that a sweeping 1994 crime bill Biden backed in Congress did not lead to mass incarceration of prisoners.

African-Americans, a key voter demographic for both Biden and Harris, have been particularly critical of the legislation, saying it devastated black communities.

U.S. Representative Alexandria Ocasio-Cortez, who is not running for president but holds influence over young progressive voters, appeared this week to criticize Biden after Reuters reported that he likely would advance a plan to tackle climate change less sweeping than Ocasio-Cortez’s ‘Green New Deal.’

Biden pushed back at Ocasio-Cortez, saying he has never been “middle of the road” on the climate issue.

“There are very loud voices on the very new progressive side of the agenda, and I think it’s useful,” Biden said in New Hampshire. “I think they’re good. They’re smart people, and they should be able to be making their case.”