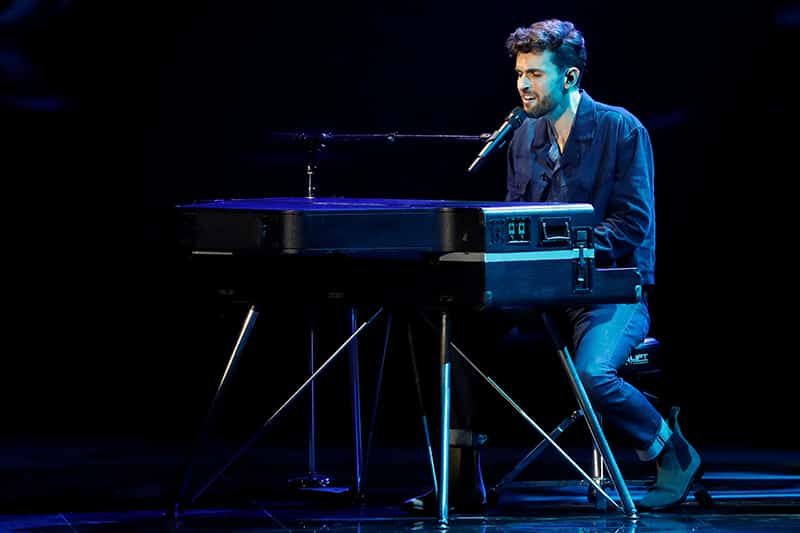 Duncan Laurence of the Netherlands

The Netherlands won the 64th Eurovision Song Contest in Israel on Sunday in a songfest that passed off without serious incident, despite calls by pro-Palestinian groups to boycott the event.

Cyprus, that was represented by Tamta with the song ‘Replay’, finished in 15th place with 101 points.

Dutch singer-songwriter Duncan Laurence beat 25 other contestants in the grand final in Tel Aviv to win the glass microphone trophy.

The 25-year-old favourite won 492 points with his piano ballad “Arcade” about a failing relationship. His victory gives the Netherlands the right to host the 2020 finals. Italy came second, with 465 points, and Russia third, with 369.

After receiving the prize from last year’s winner, Israeli singer Netta Barzilai, Laurence said he hoped he had touched listeners. “Believe in your music, believe in your artistry,” he said.

This year’s competition was more political than usual, held against the backdrop of a campaign by the Boycott, Divestment, Sanctions (BDS) movement that urged artists, fans and broadcasters to shun the event to protest against Israeli policies in the West Bank and Gaza. But no singers or broadcasters pulled out, and only a small crowd of protesters turned up outside the venue. However pop superstar Madonna sprang a surprise during her guest performance of two songs – her iconic 1989 hit “Like A Prayer” and a new number, “Future,” sung alongside the American rapper Quavo.

At the close of the second number, two backing dancers briefly appeared on stage wearing the Israeli and Palestinian flags on the back of their costumes.

The European Broadcasting Union, which co-produced the contest alongside Israel’s national broadcaster, issued a statement immediately after her performance. “This element of the performance was not cleared with the EBU and the Host Broadcaster, KAN. The Eurovision Song Contest is a non-political event and Madonna had been made aware of this,” it said.

The 60-year-old singer, who is a follower of the mystical form of Judaism called Kabbalah, had faced criticism from pro-Palestinian activists for performing at the event.

She defended her decision, issuing a statement earlier in the week that she would always speak up to defend human rights, and that she hoped to see “a new path toward peace.”

Hatari, Iceland’s entrant, drew boos from the audience when the band held up small Palestinian banners live on air during voting. The EBU said the political display “directly contradicts the contest rules.”

Security was tight through the final, with thousands of extra police, undercover officers and private security guards deployed. Fans had to pass through metal detectors and multiple security checks as armed police looked on.

Some police units used rollerblades for mobility, while security officials inside the auditorium kept watch in case activists tried to disrupt the event.

Israel said calls to boycott the competition were discriminatory and anti-Semitic, which the BDS movement denies.

In the south of the city, a beachside area was sealed off for a “Eurovision Village” spectators pavilion, where fans from different countries danced and watched the event on big screens.

Jacob Strange, 26, an Australian, said he had flown 28 hours, including two layovers, to attend. His country is one of a handful of non-European nations, including Israel, to take part.

“We love Eurovision back in Australia,” he said, adding of the protesters: “I understand where they are coming from … but in the end of the day Eurovision is about bringing people together, and about peace.”

Israelis in Tel Aviv said they were proud to be hosting the event. “I’m very excited. It’s great that it’s come to Tel Aviv,” said Alan Liferow, 58, an Israeli accountant from Ein Sarid.

But a small crowd gathered outside the venue to protest, carrying signs in Hebrew, Arabic and English reading “No Pride in Occupation” and “Feminists for Gaza.”

At one point they competed with another small demonstration against Israeli Prime Minister Benjamin, but neither drew much attention from concertgoers aside from a few brief shouting matches.

Umar al-Ghubari, a Palestinian who led a tour near the Eurovision Village, said fans were celebrating near where a pre-1948 Palestinian neighborhood had been destroyed. “The Israelis don’t want to tell this story. They want to show everything as normal,” said Ghubari.

Cyprus and the Euro elections: a dearth of issues