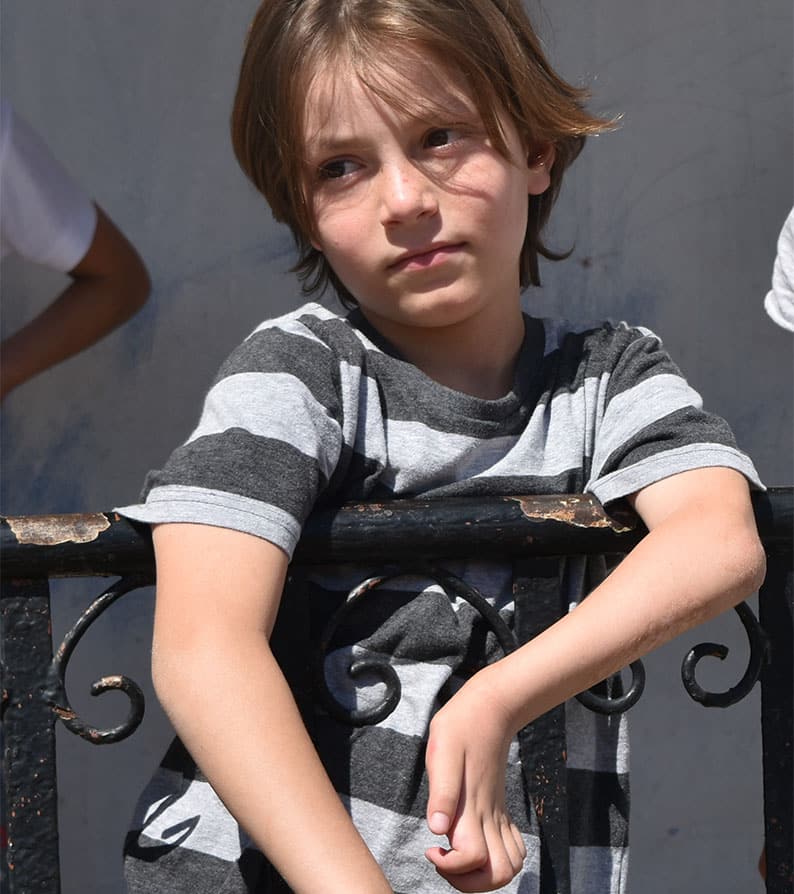 Over the eight years of Syria’s civil war, Bilal’s story has become all too familiar.

The eight-year-old boy was playing outside his family home in Idlib, Syria in 2015 when a bomb exploded, throwing him up in the air and then slamming him to the ground unconscious.

With serious injuries to his body, Bilal was rushed to hospital and survived, but the doctors in Idlib lacked the facilities to operate on his damaged hand and arm.

Five years later, Bilal and his family are now living in Paphos as recognised refugees. Bilal’s left hand is still contorted downwards and his arm damaged. It was broken in four places. His injuries make life difficult and his hopes of becoming a doctor almost impossible.

His parents are appealing for help in getting their son an operation to regain the use of his hand, and support his dream of becoming a doctor when he’s older.

“Bilal needs surgery on his nerves in his left hand and arm as soon as possible to fix the damage from the bomb and we have been trying to get him help with not much luck so far,” Bilal’s father, Abdul, told the Sunday Mail.

Bilal and his family are being helped by the Caritas charity in Paphos and volunteer, Syrian-born Rehab Al Habat, said the family have tried to get him help through various channels, to no avail.

“Makarios hospital in Nicosia didn’t come through for them and I have been speaking to Paphos hospital. Bilal has an initial assessment later this month to look at his scans, but who knows how long it will be before anything is done and time is so important before the nerves can no longer be fixed,” she said.

She hopes that the or a specialist neurosurgeon may step in to help him.

Abdul, a college teacher, his wife and their six children fled from Idlib around two years ago, in search of a safe and peaceful existence for their children.

The family, like many others hoping to find safety in Cyprus, have suffered terrible loss, lived in unbearable conditions and suffered crippling fear for their safety, especially their daughters.

“Special Daesh [Isis] tried to take me one night from my house, but we didn’t let them enter. They go around neighbourhoods late at night and if you open the door they drag you outside to a waiting car. They take you and then demand a ransom from your family,” Abdul said.

They would also take young girls and rape them.

“That is one of the main reasons why we wanted to leave,” he said.

The family explained how Islamic state imposed strict rules and dress codes in the area. Women were not allowed to leave the house and if they absolutely had to go out, they had to wear black double-layered veils, loose abayas and gloves. They handed these out to every female and they had to be completely covered.

Even their nine-year-old daughter was made to wear this apparel.

“Daesh hands them out to all women. If you don’t wear it, they will kill you and say you are not Muslim so you must die.”

Another fear was the incessant bombs that were being dropped as they know to their cost in Bilal’s case.

Soon after Bilal was injured, Abdul’s brother and nephew were killed by a bomb dropped on a market when they were shopping.

The pair were late returning and concerned, Abdul and another brother, went to look for them. As they got close to the market, they saw billowing smoke, closed roads and people shouting and screaming, desperate to find their loved ones.

Abdul discovered his brother’s motorbike, covered with blood and on fire and dashed to the hospital.

“There were eight bodies zipped up inside body bags at the hospital, and I hoped it wasn’t them. I started to open them all, the sixth one was my nephew, the seventh one was my brother. He was dead, all of his insides and muscles were out of his body. He was only 25.”

Abdul is an Arabic language teacher and was working at a college, but the family decided they had to leave and make their way to Lebanon. They sold everything, their house, land and all of their possessions.

“We realised we had to leave and decided go to Lebanon. My family crossed there, but they caught me at the border and put me in prison.”

Unable to enter Lebanon to join his family, he paid 600 dollars and got into Turkey. Then two years ago, he paid 3,500 euros for an illegal boat trip to Cyprus.

“Everyone that comes here from Syria sells everything they have to get them here to safety. So Abdul cannot go back, he doesn’t have anything. He sold his land, his house, he has nothing,” said Al Habrat.

The boat was small, crammed with 21 men on board, and the experience which lasted 24 hours, was very frightening.

“We landed somewhere in Paphos, I don’t know where, and then I went to immigration in Paphos and said I have come by boat and I want to claim asylum.”

Abdul had made sure that he had some money to last a while and stayed with a friend for a short time until his family arrived. He then rented the home they live in now.

The house is run down and in need of urgent repairs and has two bedrooms for the family of eight, ranging in age from three years up to 13.

Abdul is currently four months behind with the rent, which costs 200 euros a month.

He has a temporary job on a building site and is constantly attending the labour office to see what jobs are available. He is paid 30 euros a day and works only a few days a month.

“I didn’t know anything about this job but I have to work.”

It is difficult to make their money stretch to ensure that there is enough to eat every week, and Caritas helps with food donations.

Just recently, Abdul has started to receive the financial help from the government that he is entitled to as a refugee. But this is only 400 euros a month. The money for his wife and family is still not being paid and they are no longer in receipt of food coupons.

“The children are also growing and they need new clothes and shoes,” said Al Habrat.

Abdul, who has a flair for languages, is keen to complete a master’s degree in Greek as soon as possible, (after studying the language for a year), and has already approached a college in Paphos.

The neighbours, who are mostly elderly Cypriots, have made Abdul and his family feel welcome and the children have started to speak Greek and make friends.

The family feel safer and the children are starting to be able to sleep through the night without crying, although with family remaining in Idlib, they are fearful of losing more family members.

“Our life is here now and if we could get some help for Bilal, that would mean everything to us,” said Abdul.

Coronavirus: number of violations down (Updated)