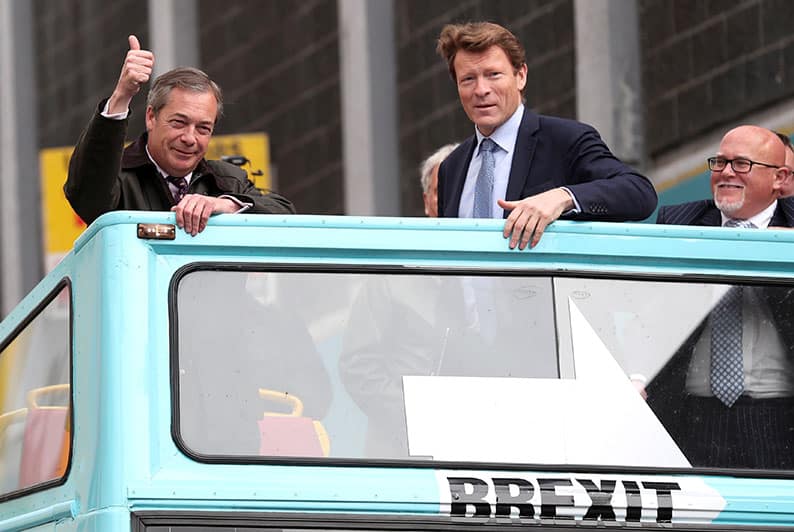 Democracy under the rule of law is not just a cliché. It is enshrined in the Treaty on European Union and is supposed to afford EU citizens representation and make its institutions accountable.

Where, however, there is no discernible need for representation or accountability holding elections to the EU parliament is crazy.

There has never been an election as bizarre as the one to be held in Britain next Thursday. As EU citizens Britons have the right to be represented in the European Parliament but being forced to hold an election as they are about to cease being EU citizens is as insulting as it is humiliating.

Far from being democratic it is an imposition, tyrannical even; a good example of the tyranny of democracy that sometimes happens in an imperfect world.

Only unelected apparatchiks in Brussels could come up with the oxymoronic justification that the democratic life of the EU required Britain to elect members of parliament as she waits to depart after her people voted to leave the EU.

The EU thought that forcing the British to participate in the European elections would dilute their passion for Brexit but the opposite seems to be happening.

If the opinion polls are to be believed, the Brexit Party of Nigel Farage is heading for a landslide.

So I am afraid he will stay in for the next crucial few months and stir up even more mischief when it would have been much better ‘if he were outside the tent pissing outside than inside the tent pissing inside’ –apologies for reversing president Lyndon Johnson’s famous observation about political troublemakers.

Worse still some pundits believe that the new parliament will be more Eurosceptic than at any time in its history. Germany sends 96 MEPs, France 74 and the UK and Italy 73; and there has been a sea change in attitudes towards the EU in all these core countries.

Populist politicians in the mould of Nigel Farage, with the same loathing for the EU and its institutions, have sprung up across Europe, their popularity boosted by xenophobia owing to misguided immigration policies and political correctness.

These populist politicians are ruthless and unscrupulous and are likely to do well. This is inescapable in a system of proportionate representation.

They do not do as well in national elections in Britain because the first-past-the-post system weeds out populists and fascists and their fellow travellers.

Italy has already been lost to the populists in national elections; Marine Le Pen is strong in France and the popularity of the Alternative fur Deutschland party in Germany is alarming.

When you add the usual suspects from East Europe into the mix we may be faced with a repeat of Germany 1933 when the populist Adolph Hitler and his Nazi party were elected to power democratically and then invaded the whole of mainland Europe and proved that  ‘civilisation is a veneer not a rock.’

Karl Marx said that ‘history repeats itself first as tragedy and the second time as farce’ and the prospect of a farcical second time is no consolation.

Closer home, all this talk from the EU that it was democratically necessary for the British to take part in phoney elections at the end of the Brexit process is disingenuous given that it could not care less that the Turkish Cypriots have not taken part in European elections since Cyprus joined in 2004.

The Greek Cypriot nationalists branded one of the Turkish Cypriot candidates, Niyazi Kizilyurek, a Turkish spy and the Turkish Cypriot nationalists call him a traitor. He is of course neither. He may be an acquired taste but he is a well-known academic and is fluent in Greek.  He affects a metropolitan Greek accent that he must know grates with most working-class Greek Cypriots yet he is the communist party’s candidate. The other Turkish candidate is Sener Levent who is an old communist and a fearless journalist. I am still struggling with the statement he was trying to make when he changed the name of his newspaper from Europa to Afrika. Why Afrika?

But Turkish Cypriot participation in the Euro elections was supposed to involve the Turkish Cypriots politically in the EU as a community not as individual candidates. The Cyprus Federal Law on Elections to the European Parliament of 2004 that would have applied had the Greek Cypriots voted yes, divided Cyprus into two electoral precincts to return a total of six members of the European Parliament.

Cyprus was to be represented according to proportional representation by each constituent state returning not less than one third of the Cypriot seats in simultaneous elections. In other words the Greek Cypriot community was supposed to return four members and Turkish Cypriot community two in accordance with a system that was similar to the one used in Belgium.

The Turkish Cypriot population was taken into account as part of the overall population of Cyprus when six representatives were allocated to her in the Accession Treaties.

However these seats were not shared between the two communities in accordance with the intention of the EU in 2004 on the spurious ground that the acquis communautaire  – the EU legal order – was suspended in northern Cyprus where most Turkish Cypriots live.

As a matter of EU law the suspension of the acquis could not affect the right of Turkish Cypriots as EU citizens to vote in elections to the European parliament. So long as they are able to hold free elections, by secret ballot, under conditions that ensure the free expression of their choice of representatives on the basis of proportional representation, there is no good reason for excluding them.

Quite why the EU cannot see that discriminating unfairly against the Turkish Cypriot community is counter-productive is perplexing.

And there is a strong precedent for granting the Turkish Cypriot community its share of MEPs because in 2004 the EU participated and was prepared to recognise the referendum result of that year as expressing the wishes of Turkish Cypriots. So if it were possible to have a referendum and recognise it for the purpose of launching the Cyprus Federation why has it not been possible for the purpose of enabling Turkish Cypriots to exercise their democratic choice to return their own MEPs as they are entitled as EU citizens.

The EU’s willingness to let the Turkish Cypriots remain disenfranchised since 2004 and its insistence that the British take part in a phoney election next Thursday just as Britain is about to leave is intellectually dishonest in the extreme.

I fear the British government went along with this charade to play for time in the hope it would never happen, but now that it is upon us she has to follow through with holding an election that makes a mockery of democracy.

It is an absurd imposition and if it were a criminal offence not to vote – as it is in some countries – it would a good defence to a charge of not voting that holding a European election in Britain after the government concluded a withdrawal agreement is a sham and contrary to EU law.

Why I won’t be voting for Disy

Tales from the Coffeeshop: Brit-bashing bandwagon rolls into town