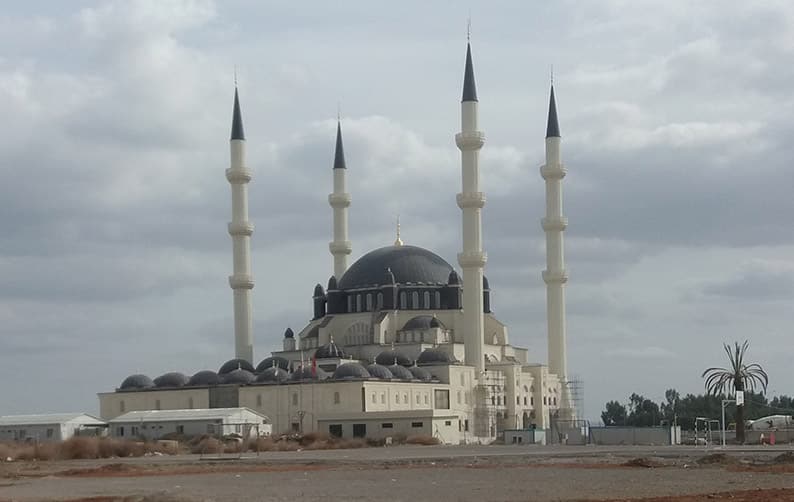 From its name and design to who controls it, the grandiose Hala Sultan mosque is a symbol of the power struggle between the Turkish Cypriots and Turkey

IT WAS widely publicised and promoted by Ankara as a grand symbol of Islam in Cyprus even before its construction began. Its groundbreaking ceremony was attended by senior officials and businessmen from Turkey making assertive statements on its symbolic and religious importance. It was featured in international media from the Guardian to Agence France Presse as it was being built.

Yet, almost two years on after its construction was completed, the monumental Hala Sultan mosque which dominates the Messaoeria plain remains sealed. Despite numerous reports in the media announcing a lavish opening ceremony to be attended by Turkish President Recep Tayyip Erdogan, the ceremony has never taken place.

The underlying reason is a bitter dispute between the Turkish Cypriot administration and Ankara over its management and the 45 million TL (about 6.7 million euros) Turkish-funded mosque is becoming yet another symbol of the dispute between moderate Turkish Cypriots and the Justice and Development Party AKP, which is increasing its religious hegemony in the northern part of Cyprus.

“The mosque cannot be opened because there is a dispute over who will have control over it,” said a source close to the issue. “Ankara demands to directly control it. We refuse and say it has to operate under Turkish Cypriot control. This mosque is in Cyprus and has to operate under the Turkish Cypriot Religious Affairs Department as all the other mosques in Cyprus.”

This has been a source of a silent war between Ankara and the Turkish Cypriot ruling coalition since early 2018 according to the source, who spoke on condition of anonymity.

The four-party coalition collapsed last week amid a huge financial impasse and corruption allegations. It had not received any funding from Ankara during its 15-month rule. The unprecedented stoppage had widely been viewed as blackmail from Ankara to put political pressure on the coalition. The coalition’s resistance against increased Islamic policies in the north was a constant cause of tension, the source said:

“There are some things that you cannot touch. If you do, you get burnt.”

The only prayers held at the mosque was on March 14 this year attended by Turkish Vice President Fuat Oktay, former Turkish state minister responsible for Cyprus affairs Besir Atalay and the Turkish ambassador Ali Murat Basceri. A statement by the Turkish Directorate of Religious Affairs said that the date of the formal opening would be decided on and announced later.

The dispute, which remained informal and behind closed doors until recently, took on a whole new dimension when the Religious Affairs Office of the Turkish embassy in northern Cyprus requested that the administration of the mosque be given to the Turkish Directorate of Religious Affairs through a formal letter addressed to Tufan Erhurman – the head of the former ruling coalition, the source said. Erhurman rejected the request, citing Turkish Cypriot laws.

There is a Turkish Cypriot law stipulating that the Turkish Cypriot Religious Affairs Department is the sole authority to manage all issues related with faith and worship.

“With the existing laws it is impossible to transfer the authority to Turkey. But who knows what happens with the next government,” the source said.

Having the management of the mosque would mean that the Turkish Directorate of Religious Affairs has the authority to directly appoint its imam, employ the over 100 people who would work in the grandiose building and be responsible for looking after its facilities.

“It is important that we control our own mosques in line with our own laws,” said the source. “We have our own way of practising our religion. We have our traditions. And all the religious activities in mosques in Cyprus should reflect Turkish Cypriot identity and culture.”

Transferring the authority to Turkey would mean conducting religious activities in line with the laws and practices in Turkey as well as importing all the sectarian conflicts that exist there, added the source.

Turkish Cypriots are among the most liberal Muslims globally and they traditionally practise a very peaceful and moderate version of Islam. The Turkish Cypriot mosques, which are small, simple, yellow-stone buildings with a single short minaret, are in stark contrast with the more grandiose mosques built in the northern part of Cyprus in recent years with the influence of AKP.

The flamboyant Hala Sultan mosque, which is viewed by many Turkish Cypriots as a symbol of Turkey’s cultural and religious imposition, covers an area of 37,000 square metres, has four 60-metre minarets. With a capacity of 6,000 people, it is so far the biggest mosque in Cyprus. Only sultans or the families of sultans could build mosques with multiple minarets under the Ottomans. Minarets later became a symbol of status and the more minarets, the higher the status.

Right next to the controversial mosque is an Islamic high-school, an Islamic university and dormitories for students, which have been operational since 2013.

The dispute between Turkish Cypriots and Ankara is not only over the administration of the mosque, according to the source said. There is also a disagreement between the sides over the name of the mosque. Turkish Cypriots don’t want to call it “Hala Sultan” because of the pilgrimage destination called Hala Sultan Tekke in Larnaca, which is revered by Muslims as the burial site of a companion of the Prophet Mohammed.

According to a 2017 online report, citing Havadis newspaper, Hikmet Kaynarca, the chairman of the board of trustees of the Cyprus Science Morality and Social Solidarity Foundation lashes out at suggestions that the mosque should be named after Sheikh Nazim – the late Turkish Cypriot Sufi Muslim sheikh and spiritual leader of the Naqshbandi sect.

“The mosque has to be called Hala Sultan,” said Kaynarca. “This is what we promised our donors. The money for this mosque did not come from the TRNC budget. It has been built with donations.”

In a move that could be seen as a message to the next Turkish Cypriot coalition, Turkish Vice-President Fuat Oktay visited northern Cyprus on Friday to attend an iftar – the evening meal during the fasting month of Ramadan – in the yard of the Hala Sultan mosque. Significantly, Oktay did not meet with any Turkish Cypriot officials.

UK’s opposition will not back ‘fundamentally’ unchanged Brexit bill

Great powers, endless wars and the path to insanity