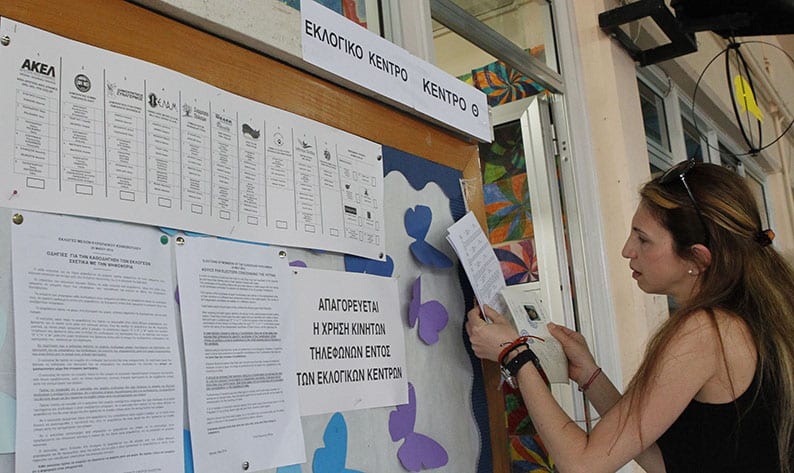 Citizens exercise their right to vote at the 2014 European Elections.

A long time Disy voter will hold her nose and vote Akel next Sunday, here’s why

Since the Cyprus problem is still the single most important issue this country has to face and should therefore be the first criterion in any election choice all of us make, and as a firm believer that bizonal bicommunal federation (BBF) is the best, if not only solution, I have decided that I will not be voting Disy in the forthcoming European elections.

As a long time Disy voter, I have found myself to be disappointed time and again. Disappointed in fact may be somewhat of an understatement. I voted for Nicos Anastasiades for president the first time round believing he genuinely wanted BBF. Turns out he had us all fooled. Not only is BBF far from his mind, but it seems he has his heart set on partition, a disaster for our little country.

As the saying goes, fool me once, shame on you, fool me twice shame on me. Even though the Disy party line is purportedly pro BBF, I no longer believe them. I’m tired of empty words. I now want to see words backed up by actions to prove they mean it. And I don’t see any actions being taken by either the party or its leader, Averof Neophytou.

Asked by a UniteCyprusNow activist at a recent bicommunal event to name just one example of an action that Disy had taken to support peace on the island, to encourage contacts between ordinary people or to increase trust between the communities, Averof could only think of a couple of meetings he himself had with Turkish Cypriot politicians and admitted that they could do more. That’s not good enough. Indeed, it begs the question, why don’t they do more?

What more would I have liked to see? Firstly I would have liked to see the party engage in an island-wide information campaign explaining to ordinary people the benefits of BBF and why BBF would be far far better than two states, aka partition. Surely if they really wanted to see the island reunited, preparing the people would be the first thing that the party should do. Why don’t they do it?

Secondly, I would have liked to see the party encourage people to cross over to the other side. It is a well-known fact that people who cross and who make friends with Turkish Cypriots are less prejudiced and more supportive of a compromise solution. The surreptitious propaganda against crossing instigated by those who don’t want BBF has been very successful in keeping up the walls of division in our minds and hearts. Why won’t they do it? If they really wanted to tear down these walls, surely that would be the first thing they should do.

At the very least, if the party and its leader genuinely wanted BBF, I would have expected them to react strongly against some of the statements that President Anastasiades has been recently spouting designed to spread fear in the population about what BBF would bring.

Not only that, if they really wanted the island and its people reunited, I would not expect them or their candidates to try and demonise one of the Turkish Cypriot candidates as being a Turkish spy. How hypocritical is that and how does that bode well for the future? In doing so they are feeding on the fear and mistrust that has built up over the many years we have been living apart and undermining the possibility of coexistence.

Finally, and perhaps more important than what Disy hasn’t done in support of BBF, is what it has done that has made me turn against them. I would not expect a party that supposedly supports reunification to be pandering to the very people who do not want such an outcome, but to condemn them at every opportunity.

I will not be voting Disy because I don’t want to support a party that flirts with extremists, nationalists, rejectionists and Elamites, let alone puts such people on their ballot sheets. Vague generalisations that enosis is dead and gone, while allowing someone on their ballot sheet who in this day and age makes statements in support of enosis, should be an alarm bell for any voter who wants to see the island reunited. The party should be made to pay a price for continuing to harbour extremists in their midst and for continuing to tolerate the very views and attitudes that have destroyed Cyprus.

So what are my options?

Not voting is not an option for me, nor should it be for anyone else. It is a well known fact that low voter turnout means that extremist elements get voted in instead, as their supporters are the ones who bother to turn up to vote. Besides, someone’s going to get elected, so it may as well be with my vote.

I could vote for an independent candidate. Sener Levent might have got my vote simply by virtue of being a Turkish Cypriot, but he does not support BBF so he’s not an option.

The other option is Akel. Even though Akel is a disaster of a party, an anachronism that supports a failed system, and a party that has brought many catastrophes to our island, (from supporting rejectionist Tassos Papadopoulos, to voting No to the Anan plan and following it up with economically illiterate Christofias, to name but a few), as far as the Cyprus problem is concerned, the Akel of 2019 is the only party that is saying the right things at the moment.

Granted, they too may be paying lip service to BBF, but at least they are taking some concrete actions. By putting forward a Turkish Cypriot candidate, in Niyazi Kizilyurek, they are putting their money where their mouth is. Niyazi has for years been an ardent supporter of federation and has written several books on why it is the best option for our country. He believes what is good for a Greek Cypriot can also be good for a Turkish Cypriot and sees our future in unity. He speaks both Turkish and Greek fluently, thereby representing what we should all be aspiring to. He hates nationalism with a passion, fully aware that nationalism on both sides is what destroyed the island. Above all if he gets elected it will be a poke in the eye to any nationalist Disy candidate or Elamite that gets through.

So it will be while holding my nose that I will vote Akel at the forthcoming elections. With one tick only – for Niyazi Kizilyurek.

Marina Christofides is the author of The Traitors’ Club: A Memoir

The tyranny of EU democracy