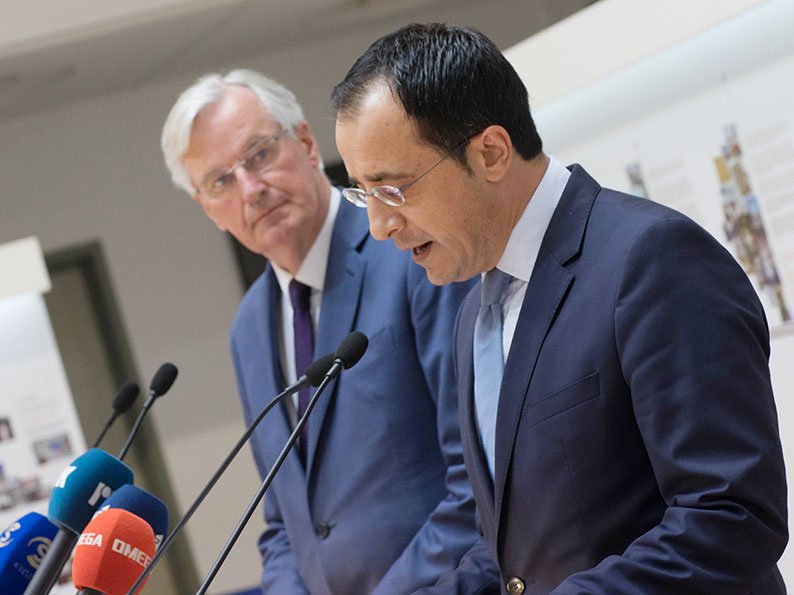 The EU stands behind Nicosia and expects Turkey to respect the sovereign rights of EU member states and will respond appropriately and in full solidarity with Cyprus, the EU’s Chief Negotiator for Brexit, Michel Barnier said on Monday.

Barnier was briefed on Turkey’s activities in Cyprus’ exclusive economic zone (EEZ) by Foreign Minister Nicos Christodoulides during his visit to Nicosia to discuss Brexit.

“The EU stands behind Cyprus and expects Turkey to respect the sovereign rights of EU member states as President Tusk said in Sibiu a few days ago,” Barnier said after meeting Christodoulides.

He also said he wanted to repeat what the High Representative of the European Union for Foreign Affairs and Security Federica Mogherini said on May 4. Mogherini had urgently called on Turkey “to show restraint, respect the sovereign rights of Cyprus in its exclusive economic zone and refrain from any such illegal action to which the EU will respond appropriately and in full solidarity with Cyprus”.

“We express grave concern over Turkey’s announced intention to carry out drilling activities within the exclusive economic zone of Cyprus,” Barnier said, and then repeated Mogherini’s quote verbatim about responding appropriately.

Barnier met earlier Monday with President Nicos Anastasiades, and with members of the House foreign affairs committee with whom he discussed issues relating to a hard Brexit.

Speaking after meeting Barnier, Christodoulides said he had the opportunity to brief the EU official on Turkey’s escalated illegal activities in Cyprus’ EEZ “in violation of the Republic’s sovereign rights, and contrary to international and EU law”.

“Turkey’s actions, which are destabilising in the Eastern Mediterranean region, have drawn broad condemnation from the international community. Michel is well aware of the discussions we have been having with our partners in Brussels, who promptly expressed their support and solidarity with the Republic of Cyprus, on the need for the EU to react collectively and decisively to this flagrant violation of a member state’s sovereign rights,” he added.

On Brexit, Christodoulides said Cyprus remained convinced that the withdrawal agreement “provides the best and only way to ensure a smooth and orderly Brexit with the least adverse consequences for all”.

Christodoulides also expressed his gratitude to Barnier for the close cooperation throughout the negotiations on the Protocol on the status of the British bases in Cyprus post-Brexit.

Barnier also referred to the British bases saying: “Our common objective is to preserve the status quo and avoid disrupting the life of the people living in the bases. That is what we did in the withdrawal agreement. In any case, we will take all necessary measures to achieve this objective.”

During Monday’s meeting, he said, the two men had a broad and constructive exchange of views on a number of other topics relating to Brexit and the EU’s state of preparedness, focusing on issues of particular relevance and importance to Cyprus.

“We discussed the latest developments on Brexit, and the next steps following the decision of the April European Council extending the Article 50 deadline for the UK’s exit until October 31, so as to give additional time to the UK to decide how it wishes to proceed, with a view to ensuring a smooth and orderly withdrawal,” said Christodoulides.

“This decision was vital under the circumstances, providing much needed space and certainty for our citizens and for our businesses.”

He added that the EU and the 27 member states had done everything within their power to facilitate the best possible outcome for all, under the circumstances.

It was totally up to London to proceed with taking the necessary decisions so that the UK’s withdrawal could be effected as soon as possible.

“Whilst we sincerely hope that a breakthrough will be achieved in London that will lead to the ratification by the UK Parliament of the withdrawal agreement, we have prepared for all scenarios, in order to ensure that the impact on the daily lives of our citizens and on our economies will be minimised, irrespective of the time and the way in which Brexit will eventually occur,” Christodoulides said.

Barnier thanked Anastasiades for his personal trust and support on Brexit, as well as the Cyprus government in general, and in particular Christodoulides and his team.

“Today, the fundamental choices in front of the United Kingdom remain the same: deal, no deal, no Brexit,” Barnier said.

Following Barnier’s attendance at the House, committee chairman Giorgos Lillikas, said: “From the evidence presented to us by Mr Barnier a hard Brexit would be a very complicated development that will affect virtually all European countries, but it will have a detrimental effect on Britain itself.”

Apart from trade, in addition to the free movement of people and goods, there are big open issues that would take much more effort to resolve if Britain exits without an agreement, he added.
Especially for Cyprus, Lillikas said that in the event of a hard Brexit, it would require separate negotiations on the rights and freedoms of Cypriot citizens living on the British bases, trade relations, tourism, and the issues of Cypriot students in the UK and about 250,000 Cypriot residents in the United Kingdom.
“Cyprus is one of the countries likely to be significantly affected by a hard Brexit,” Lillikas added.

Hoping that the Cypriot government has prepared for the possibility of a Brexit without an agreement, Lillikas said the House committee itself had no idea of what the government’s preparations actually were as the minister of commerce, he said, had refused to attend a committee meeting to brief MPs.

Ruling Disy’s Nicos Tornaritis, who was also at the committee meeting, said there were many issues left to address in the event of a hard Brexit. He also expressed disappointment with the absence of the political parties from the committee meeting other than Disy, Akel and the Citizens Alliance, which committee chairman Lillikas is leader of.

“The representatives of the other parties unfortunately applied the policy of the vacant chair and this is perceived to be neither correct nor does it do credit to the Republic of Cyprus when it comes to such a complex political and economic matter,” said Tornaritis.

A concert for peace and dialogue