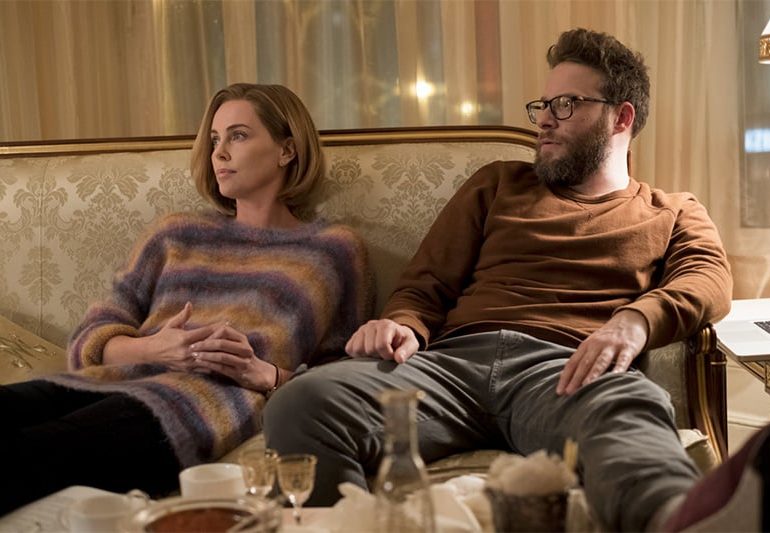 Those who recall Knocked Up from 2007 – the film that made Seth Rogen a star, at the age of 25 – may also recall their disbelief that poised, statuesque Katherine Heigl in that movie would fall for the gross, immature manchild played by Rogen, even with the caveat of having been impregnated by him. Fast-forward to Long Shot, and another romantic comedy about an unlikely pairing – but Rogen in Knocked Up seemed oblivious to the disparity, whereas Fred (his character) in Long Shot seems legitimately stunned that someone like Charlotte (Charlize Theron) would have any modicum of interest in his scruffy, weed-smoking, tattered-teal-windbreaker-wearing ass. I suppose that’s a kind of maturity.

The twist, of course, is that Charlotte isn’t just elegant, intelligent and beautiful; she’s also the US Secretary of State, representing a popular but dumb-as-a-doorknob president and mulling a presidential bid of her own. Fred, on the other hand, is an investigative journalist for an edgy Brooklyn paper (a job the film seems to regard as somewhere between a hipsterish indulgence and a quixotic waste of time) – but they grew up as neighbours, and he even has a rather embarrassing flashback of being babysat by then-idealistic teenage Charlotte. Her idealism has now given way to a necessary cynicism (politics, innit?) – but her poll numbers show a sense-of-humour shortfall in how voters see her, and scruffy Fred is obviously hilarious, so she hires him to juice up her speeches for the eco-treaty she’s putting together. Never mind strong and silent; nerdy, woke and funny is the way to get the ladies in this day and age.

‘This day and age’ is relevant here, the film touching on a number of social issues in addition to the central romance (oh sorry, did I spoil that for you?). “If I’m angry, I’m ‘hysterical’. If I’m emotional, I’m ‘weak’. If I so much as raise my voice, I’m a bitch,” complains Charlotte, laying out the unfair double standard for women in politics – and it’s not just politics. Women in comedy face the same problem (a point made in passing by Rogen, who of course started out as a stand-up), and let’s not even mention relationships: no man wants a woman who’s more powerful than he is, “it’s a dick-shriveller”. “The Dick-Shriveller is my favourite Batman villain,” quips Fred, his comic-book reference marking him out as a sensitive ‘ally’ who’s not going to go on some macho trip.

Some will want Long Shot to do more. It’s politically liberal, but perhaps it should be more liberal; Fred’s best buddy Lance (nicely played by O’Shea Jackson Jr, son of Ice Cube) is revealed – much to Fred’s shock – as a devout Republican, implicitly urging liberals to be less partisan and engage with the other side more. Charlotte is a strong female character, but perhaps she should be even stronger. That kind of criticism misses the point; Long Shot is mainstream, to be sure (it’s also careful not to enrage Trump voters, making the president more of a ditzy Ronald Reagan) – but Rogen explicitly plays ‘the woman’ here, threatened by a glamorous Other Woman (Canadian prime minister Justin Trudeau!), feeling insecure and seeking affirmation, telling the missus that he’s happy to be her little secret, “like I’m Marilyn Monroe and you’re JFK”. This is heady stuff in a multiplex rom-com.

The real problem isn’t the social-justice angle, it’s everything else. The film is too long, like so many big-studio comedies. It repeatedly stalls, and has to kick-start itself: the Northern Lights appear as a deus ex machina, then it suddenly turns into an action movie for about 10 minutes. A scene where Charlotte has to handle a hostage situation while high on ‘Molly’ never quite takes off into hilarity – though the justification she and Fred use for getting high is amusing, viz. to feel like ordinary people who don’t give a damn about the world. (This is right after evil capitalists threaten to derail her environmental treaty.) Ah, to be so virtuous that you need to get trashed just to join the deplorables for a few hours.

Long Shot is one of those movies where the list of ingredients is more impressive than the final result. It’s a rom-com with Things to Say – but the Things are often truisms and the rom-com part is only intermittently effective. Rogen and Theron are both very good, yet their pairing seems to lack a certain something. There’s a lengthy bit where Fred and Charlotte, alone on the sidelines of a big party, dance to Roxette’s ‘It Must Have Been Love’, inaccurately described as the best song ever (the film is big on 90s nostalgia) – and their dance should be deeply romantic yet it doesn’t even feel like they’re dancing together, swaying in companionable silence while lost in their thoughts. (They don’t even bother touching after a while.) They seem more like good friends sharing a moment than people in love throwing caution to the winds. Long Shot has a lot on its mind, not to mention a few decent jokes, but it doesn’t strike sparks; I guess that was always a long shot.

EU research and innovation DG in Cyprus this week