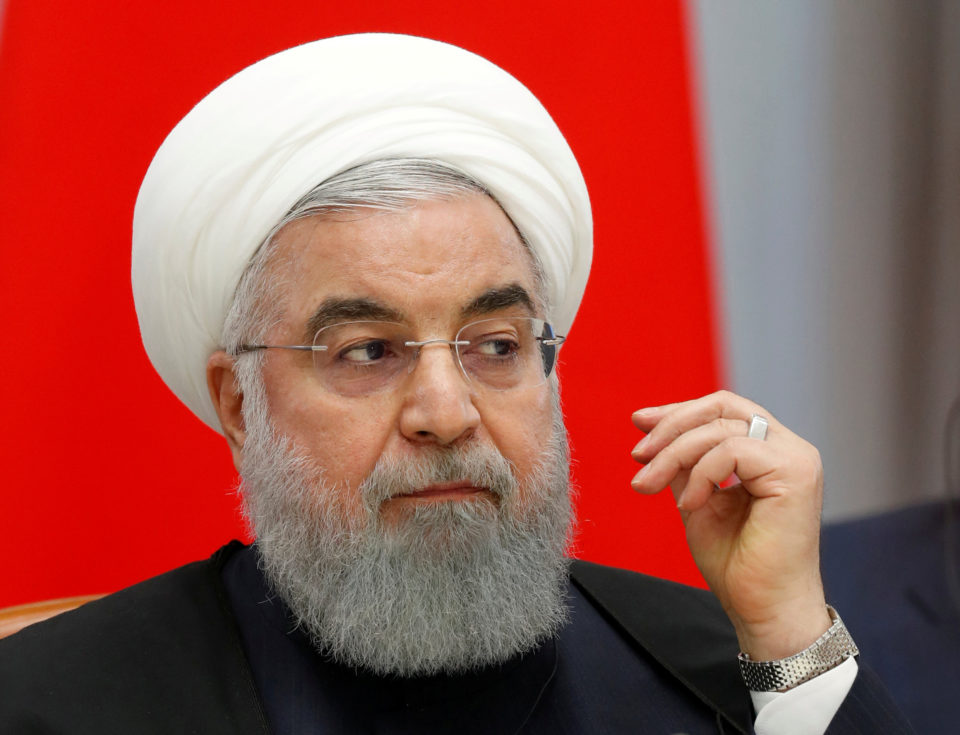 Iranian President Hassan Rouhani rejected talks with the United States on Tuesday, after President Donald Trump said Iran would call and ask for negotiations “if and when they are ever ready”.

Tehran and Washington have escalated rhetoric against each other in recent weeks as the United States has tightened sanctions with what it says is the goal of pushing Iran to make concessions beyond the terms of its 2015 nuclear deal.

Trump withdrew the United States a year ago from the deal between Iran and global powers, under which Tehran curbed its uranium enrichment capacity, a potential pathway to a nuclear bomb, and won sanctions relief in return.

Trump restored U.S. sanctions on Iran last year and extended them this month, ordering all countries to halt imports of Iranian oil or face sanctions of their own. Iran has repeatedly rejected any further negotiations as long as the United States remains outside the nuclear pact.

“Today’s situation is not suitable for talks and our choice is resistance only,” state news agency IRNA quoted Rouhani as saying.

Trump said on Monday that Iran would be met with “great force” if it attempted anything against U.S. interests in the Middle East. He said reports Washington was trying to set up talks were false, but “Iran will call us if and when they are ever ready”.

Critics have accused Trump of sending mixed signals. Last week three U.S. officials told Reuters that Trump had told his top advisers he does not want war with Iran.

Iran has portrayed the hot and cold rhetoric as evidence Trump is being goaded into war against his better judgment by hardline aides such as National Security Adviser John Bolton.

“Right after threatening Iran, they were forced to say they do not seek a war,” Rouhani said in televised remarks on Tuesday. “Iranians will never bow to a bully.”

Rouhani won two landslide elections in Iran on promises to ease its international isolation. But Trump’s decision to abandon the 2015 nuclear deal has helped ensure that Iranians have felt little or no economic benefit from Rouhani’s policies.

The rial currency lost about 60 percent of its value in 2018 under the threat of the revived U.S. sanctions, boosting inflation and provoking sporadic demonstrations. Iran has cracked down on businessmen it accuses of profiteering.

Washington’s European allies say they share U.S. concerns about Iran’s behaviour, but disagree with Trump’s decision to pull out of the nuclear deal, arguing that it undermines Rouhani’s pragmatic faction and boosts Iran’s hardliners.

They have sought to ensure Iran still benefits from the nuclear deal by finding ways for foreign companies to do business there. But in practice this has so far failed, with companies cancelling investments for fear of U.S. punishment.

Iran said this month it could resume uranium enrichment beyond levels allowed in the nuclear deal if European countries do not find ways to ease financial pressure within 60 days.

French Economy Minister Bruno Le Maire said the Iranian threats were not helpful: “I do not think that Europe will get drawn into this idea of an ultimatum,” Le Maire told reporters.

Iraqi Prime Minister Adel Abdul Mahdi said on Tuesday Iraq would send delegations to both Washington and Tehran to help ease the tension between them.

Iraq is one of the few countries with close relations with both the United States and Iran, which each have helped it fight against Islamic State militants. Washington abruptly pulled non-essential staff from its embassy in Baghdad last week, citing a threat from Iran-backed militias in Iraq.

Eight offshore drills for hydrocarbons over next 24 months