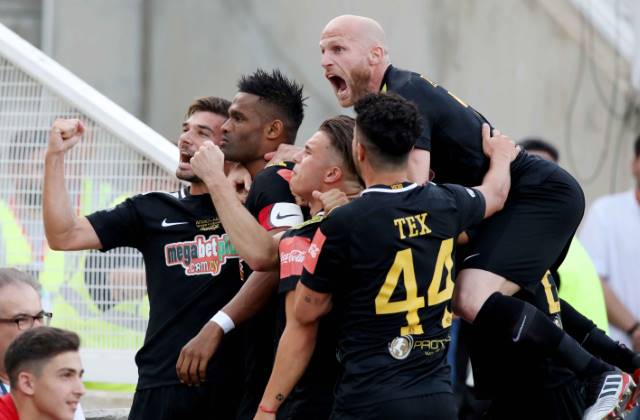 AEL won the Coca Cola Cyprus Cup on Wednesday night, beating Apoel 2-0 in the final at the GSP stadium in Nicosia.

Goals by Dossa Junior and Andamovic, one in each half, settled the 77th edition of the showpiece.

Both sides lined up with one surprise in the centre of their defence, with Apoel’s Giorgos Merkis taking the place of the injured Carlao while Boris Godal was dropped in favour of Kevin Lafrance.

AEL opened the score in the 10th minute after Andreas Avraam’s inswinging corner was headed into the net by captain Dossa Junior.

From there on AEL gave space to Apoel but defended resolutely leaving no space for the champions to create any clear-cut opportunites, apart from a couple of long-range efforts that were easily collected by AEL goalkeeper Vozinia.

Apoel did finally manage to create a good goal-scoring opportunity late on in the half but Mousa Al Taamari’s spectacular bicycle kick hit the post with Vozinia well beaten.

However it was AEL who missed the biggest chance of the half to double their advantage in added time when Andreas Makris, from just three metres out, managed to stab the ball the wrong side of the post with only goalkeeper Boy Waterman to beat.

Seeing that his plan was not working, Apoel manager Paolo Tramezani changed his 3-5-2 formation to the more conventional 4-4-2 and it nearly paid off but Tomas de Vincenti’s shot from inside the area went just wide.

Despite controlling play, Apoel looked vulnerable at the back on the break and AEL took advantage of this in the 66th minute when Andamovic slotted the ball into an empty net after Waterman could only parry Makris’ goalbound effort.

Apoel tried to respond but failed to penetrate the well-marshalled AEL backline once.

AEL, who won the cup for the seventh time in their history and the first time since 1989, were worthy winners as they completely nullified Apoel’s potential match winners while breaking dangerously on the counter-attack.

Speaking after the final whistle, AEL manager Dusan Kerkez said: “We worked very hard for this and a big thank you to all our fans who came and supported us. It’s been a great year.”

AEL’s Cyprus international defender Andreas Avraam told Alpha: “We are very proud of our team. We promised that we would do our best for AEL to lift the cup after a 30-year gap. The party has already started.

“Nobody thought that this team could do it. We showed that AEL are a great side and now we’re going to Limassol to celebrate.”

Wednesday’s win means Avraam has now lifted the cup four times – twice with Apollon, once with Omonia and now with AEL.

UN blow to UK over military bases on ex-colony