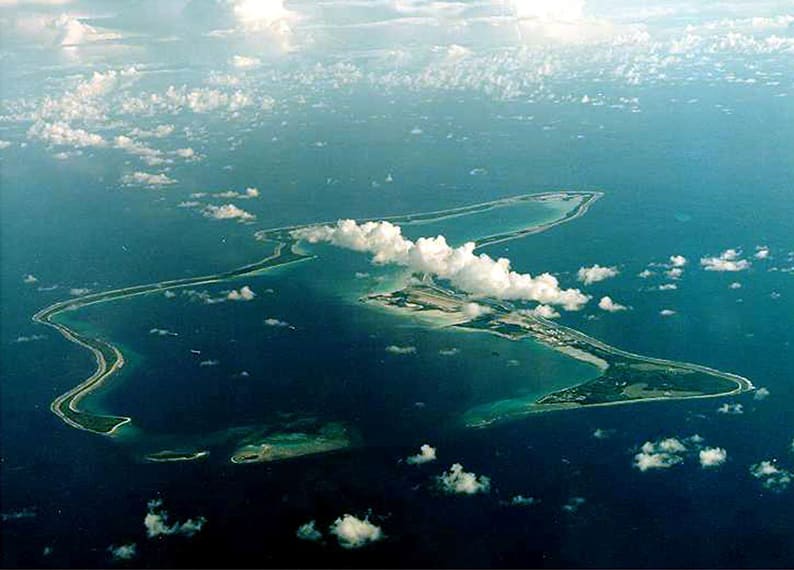 The Chagos Islands in the Indian Ocean

The United Nations General Assembly overwhelmingly demanded on Wednesday that Britain give up control over the Chagos Islands in the Indian Ocean within six months, dealing a diplomatic blow to Britain and the United States, and with possible ramifications for Cyprus.

The UN resolution adopted on Wednesday backs a non-binding advisory opinion issued by the International Court of Justice (ICJ) in February, which found Britain had acted unlawfully in the decolonisation process and should relinquish control.

That decision was seen as a test of the legitimacy of deals struck between great powers and small states at the end of the colonial era, which could also include Cyprus. Cyprus’ legal service has been studying the details of ICJ decision.

The case has raised the question whether it is legitimate, under international law, for Britain to use such territories as military bases. One of the 22 countries heard before the court was Cyprus with attorney-general Costas Clerides representing the island.

Britain, which has overseen the region in the Indian Ocean since 1814, detached the Chagos islands in 1965 from Mauritius – a colony that gained independence three years later – to create the British Indian Ocean Territory (BIOT). It is home to a joint British and US airbase.

Wednesday’s General Assembly resolution won the support of 116 countries, while 56 abstained and only Australia, Hungary, Israel and the Maldives joined Britain and the United States in voting against it. Fifteen countries did not vote.

The UN General Assembly had requested the court’s opinion in a resolution adopted in June 2017 with 94 votes in favor, 15 against and 65 abstentions. The Hague-based institution is the top United Nations court for inter-state disputes.

UN General Assembly resolutions are non-binding but can carry political weight. Britain and the United States had written to all UN members to ask them to vote against the resolution.

Britain leased the Chagos archipelago’s biggest island, Diego Garcia, to the United States in 1966, paving the way for construction of an airbase that required the forced removal of some 2,000 people.

“Its status as a UK territory is essential to the value of the joint US-UK based on the BIOT and our shared security interests,” wrote acting US Ambassador to the United Nations Jonathan Cohen. “The joint base is critical to our mutual security as well as broader efforts to ensure global security.”

Diego Garcia became an important US base during the Iraq and Afghanistan conflicts, acting as a launch pad for long-range bombers. The US lease lasts until 2036. British UN Ambassador Karen Pierce said that under Britain’s agreement with the United States, the islands had to remain a British territory until at least then.

Mauritius Prime Minister Pravind Kumar Juqnauth said his country was prepared to enter into an agreement with United States or Britain or both, to be allowed unhindered operation of the base.

“It is therefore difficult to understand the UK’s position, unless it is one whereby Mauritius is not considered to be a trusted partner – a position which is deeply offensive to Mauritius, and to every member of the African continent,” he told the General Assembly.

In his speech before the ICJ, Clerides had stressed the right to self-determination of a state, noting that colonialism is a violation of international law.

The assessment of the legal consequences of the continued administration of part of a country’s territory in cases where the decolonisation process has not been completed in accordance with international law should be made in the light of international law as it is today, and not as it did during cessation or the independence of the state concerned, the legal service said at the time.

Another major point, according to the Cyprus legal service, is that “the continued exercise of ground management by the former colonial power, which has not become part of the decolonisation, is a continuing illegal international act and must end as soon as possible”.

Clerides said the successful outcome of the case would be a serious legal weapon, noting that “the right to self-determination is and will always be respected and inalienable regardless of the circumstances which exist at the time countries gain their independence.”

The ICJ, the principal judicial organ of the United Nations, said also that is was of the opinion that all member states “are under an obligation to co-operate with the United Nations in order to complete the decolonisation of Mauritius.”

After gaining the islands in the early 1970s, Britain evicted almost 2,000 residents to Mauritius and the Seychelles to make way for the US military base.