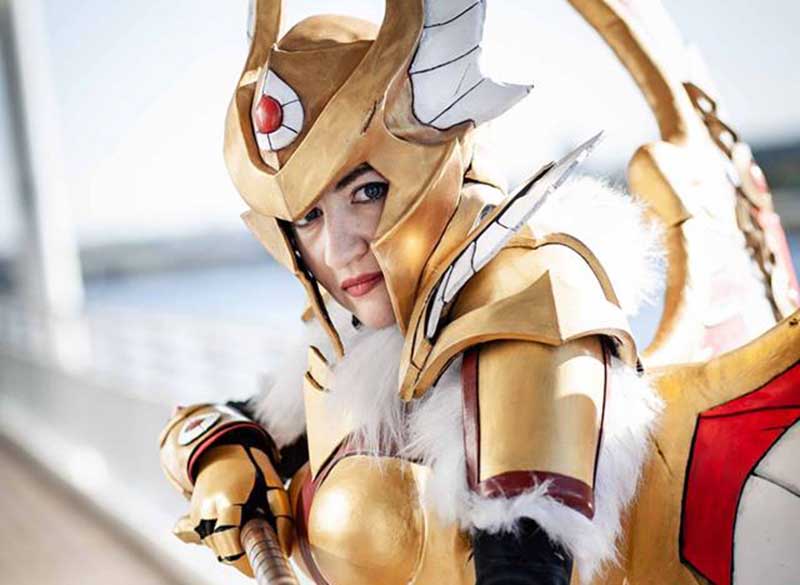 The Digital Iris of Theo

If you ever thought cosplay was for kids, think again. At 36 years of age, Gloria Roussou is one of the island’s foremost cosplayers, part of an inclusive community that sees exponents take on the creation of an entire character: everything from costume to props, mannerisms to movement.

A discipline which requires both incredible skill and a significant time commitment, cosplay is defined as ‘the practice of dressing up as a character from a film, book, or video game’. But this isn’t about raiding the dressing up box: most cosplayers make their own costumes pretty much from scratch, and spend years perfecting their craft…

“I’ve always loved to make things,” Gloria explains. “I’ve always loved working with my hands.” Cypriot by birth, she was born in Brighton, moved to Athens, and then to Crete – where she did her Bachelors in Political Science, focusing on sociology and the history of politics, two disciplines which have stood her in good stead during her cosplay career.

“Most of the characters I create are based on video games,” she explains, “games which are often based on historical facts and figures. My last character, for instance, was Kassandra from Assassin’s Creed Odyssey, a series of games which are very historically accurate.” In one iteration, players must talk at length with Socrates, imbibing his wisdom, wrangling over philosophy and politics; others are set during the times of the American Civil War or the French Revolution. Extensive research is a must, warns Gloria, for both players and those who attempt to encapsulate game characters!

Going by the name of Alcaria Cosplay (most well-known exponents of the art take a ‘stage name’) Gloria’s Kassandra recently earnt her first place at the Cyprus Comic Con EuroCosplay Competition, securing her the right to represent the island at London’s MCM Expo EuroCosplay for the second year running. With her handmade costume and lifelike props, she brought her character so sharply to life that judges were “breath-taken.” But her performance was merely the culmination of months of hard work, work which saw her create all parts of both costume and props by hand.

“I made the breastplate from craft foam and Worbla, covering it with faux leather and hand-carving each detail before painting it gold. The shin guards and left bracer were crafted in the same way, painted in black and covered in gold Rub-n-Buff to look like aged metal, while the right bracer was a plain sheet of craft foam, sanded and distressed with a rotary tool, its designs sculpted from Thibra. The belts and skirt I made from faux leather and craft foam strips, which were sanded and distressed. And the tunic I sewed in hand-dyed linen, making its ornamentation from two types of braided trim.” 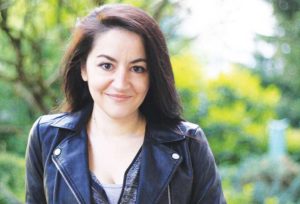 The props – Gloria’s favourite part of any cosplay, “they’re so integral to any character; incredibly detailed magical weapons for the most part, though Kassandra did require a huge 3D prop pyramid! – were constructed from carved foam reinforced with wooden dowels, covered with Worbla and filled with magnets to connect the spear to the quiver. In fact, the only elements not made from scratch were the shoes: “I bought a pair of sandals and added straps and small strips of fabric, covered the ankles, and painted them!”

What with sewing, sanding, painting, carving, sculpting, sticking, braiding and hand-tooling, Kassandra was four months in the making. “All that work, all those hours, and at the end it all boils down to a few minutes on stage in front of the judges. But it’s worth it,” she laughs. “In real life I’m very quiet, very shy. But cosplay gives me the chance to become a totally different person. It’s like being your alter ego; it’s empowering and rewarding.”

A gamer since childhood – her official cosplay name is taken from Tolkien’s elvish lexicon: ‘glory’ translating as ‘Alcare’ – she began crafting costumes and props long before she heard the word cosplay. “I was studying in Crete in 2005, and wanted a carnival outfit that was different, so I made an entire Nazgûl – the monster from Lord of the Rings – costume. That was the beginning,” she smiles. “Not long after, I found there was this wonderful community of people all over the world doing just the same thing: handcrafting the costumes and props of characters from books and games, helping each other out with ideas and advice.”

Today, a renowned cosplayer in her own right, Gloria not only crafts and exhibits her own costumes, but also accepts commissions, holds workshops and hosts online tutorials for those in the community. And, in her spare time, she’s a tour guide in Munich, where she and her husband now live. But her first love is cosplay, and most of her time goes into this complicated craft.

“When we first moved into our new flat there was an issue with the shower; it hadn’t been sealed properly and was flooding. Fortunately, cosplay teaches you how to use all sorts of materials and techniques, and I knew exactly what to buy and how to apply it. Over the years,” she adds, “I’ve learnt to work with fibreglass, with silicon, with thermoplastics and ethylene-vinyl acetate foam; I’ve even taught myself 3D modelling using architectural programmes, and how to weave chain mail!

“I’m always working on something, some little project or a costume I’m making – even on holidays and at weekends. I have the most fun during the research and construction process,” she continues. “Though I do enjoy being the character on stage, walking round and taking pictures with fans, for me, it’s all about the crafting part. And also the opportunity to be part of such an inclusive, accepting community,” she adds. “Gender, background, age – none of that matters in cosplay; it just doesn’t matter who you are or what you look like. At the end of the day, you’re learning new skills, entertaining others, and having a great time. There’s a lot more to this than anyone imagines,” she laughs. “But that’s cosplay, and it’s worth it!”