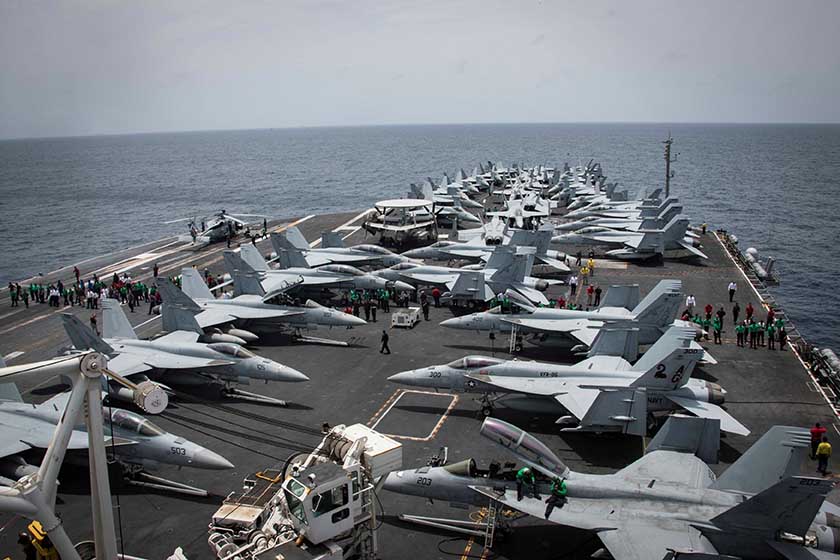 The USS Abraham Lincoln (CVN 72) in the Arabian Sea

“After a long debate, the highest levels of the military could not forecast a way in which things would end favourably for the United States,” said Richard Clarke, counter-terrorism adviser in the White House under three administrations. That was back in 2007, and he was talking about the Pentagon’s attempts to come up with a winning strategy for a US war with Iran. No matter how they gamed it, the US lost.

Two years later, in 2009, US Marine General Tony Zinni warned that any attack on Iran would lead inexorably to ‘boots on the ground’.

“If you liked Iraq and Afghanistan,” he added drily, “you’ll love Iran.”

And in 2011 Meir Dagan, former head of Mossad, Israel’s national intelligence agency, said that an attack on Iran was “the stupidest idea” he had ever heard.

This was all back in the days when various people in the West were talking far too loosely about war with Iran, because the Iranian president at the time was a loud-mouthed extremist named Mahmoud Ahmadinejad. Then he lost the 2013 election and was replaced by a moderate reformer, Hassan Rouhani.

Rouhani stopped all the aggressive talk, and in 2015 he cut a deal with most of the world’s major powers to put Iran’s nuclear weapons ambitions, if any, on ice for at least fifteen years. Everything then went quiet until another loud-mouthed extremist, Donald Trump, tore up the 2015 agreement and began talking about war with Iran again.

He doesn’t necessarily mean it. What Trump says on Mondays, Wednesdays and Fridays he often recants on Tuesdays, Thursdays and Saturdays. (To make matters even more inscrutable, his threat to bring about “the end of Iran” was made last Sunday, and there are no rules for Sundays.) But he is surrounded by people who sound like they really are looking for a fight with Iran.

To be fair, Vice-President Mike Pence and Secretary of State Mike Pompeo are probably telling themselves that plausibly terrifying US threats will suffice to make Iran crumble. Only National Security Adviser John Bolton understands that the threats will cause Iranian reactions that can then be used as an excuse for an actual attack (and he’s just fine with that).

So is the scenario of a US attack on Iran, with or without Saudi Arabian and Israeli help, still as hopeless a project as it was ten years ago?

It’s not hopeless at all if you just drop nuclear weapons on the twenty biggest Iranian cities. That’s not enough to cause a nuclear winter, but quite enough to kill between a quarter and a half of Iran’s 80 million people. If you do that (and either the United States or Israel could do it single-handed), the Iranians will never come back for a re-match.

But neither the United States or Israel is going to do that. It would make them literally the enemies of all mankind. And short of doing that, there are no good options for winning a war against Iran, because (as in all ‘asymmetric’ conflicts) the Iranians don’t need a winning strategy. All they have to do is not lose.

The United States and its friends could certainly destroy all of Iran’s military and industrial facilities by ‘conventional’ bombing, including most of the underground facilities. (The Iranians, having lived with threats like this for a long time, have done a good deal of digging.)

The attackers could also destroy all the utilities like water, sewage and electrical power that make urban life possible, forcing millions of Iranian city-dwellers into refugee camps in rural areas. The Iranians might be able to shoot a few of the attacking planes and missiles down, but not many.

But none of this would force the Iranians to surrender, nor would it prevent Iran from stopping all the tankers going into and out of the Persian Gulf (which transport most of the oil burned in India, China and Japan). Iran’s sea-skimming missiles can be fired from mobile launchers anywhere along 3,000 km of coastline, and have the range to reach the other side at any point.

So in the end, if you’re serious, it would have to be ‘boots on the ground’, just as Zinni said. But the ground war is unwinnable too. Iran’s army is about the same size as that of the United States, but it could quickly expand to ten times that size with volunteers, as it did during the US-backed Iraqi invasion of Iran in 1980-88. And Iran is as large as France.

Would the Iranians volunteer in such numbers? Of course they would. Many Iranians don’t like the current regime, but they are patriots. They are as unlikely to welcome a US invasion as American liberals would be to welcome a foreign invasion promising to liberate them from Donald Trump.

The Iranian volunteers would be poorly armed and they would die in droves, but if only one American soldier died for every ten Iranians, the US public would quickly reach its maximum tolerance level for American casualties. It would be a high-speed replay of the Vietnam war, and the US would lose again.

So don’t do it. Don’t even think about it. It really is the stupidest idea.