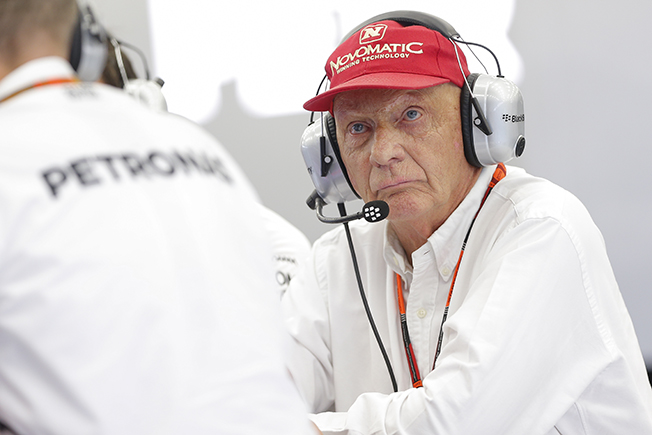 Formula One will honour Niki Lauda at this weekend’s showcase Monaco Grand Prix, with teams and drivers on Wednesday still coming to terms with the triple world champion’s death.

The Austrian, who died on Monday aged 70, won in Monaco with Ferrari in 1975 and 1976 but was latterly the Mercedes team’s non-executive chairman and shareholder with principal Toto Wolff.

A Formula One spokesman said a tribute was in the works, with details to be confirmed. Others said a minute’s silence was planned for before the race.

Five times world champion Lewis Hamilton, who paid an emotional tribute to the Austrian on Instagram, made a paddock appearance but was exempted from a scheduled FIA-organised news conference.

A team spokesman said they had asked for Hamilton to be excused on the grounds that he had “lost a very close friend in Niki.”

Finnish team mate Valtteri Bottas took the Briton’s place instead, and said Hamilton seemed OK when he saw him earlier.

“He (Lauda) meant a lot to me but was a key member of ours in the race team and factory, a big part of the Mercedes family and was a massive motivation for everyone and myself as well,” Bottas told reporters.

Mercedes said team members would wear black armbands from Thursday and there would be a tribute, as yet undecided, on the cars.

Ferrari said they too would honour their late champion, who won two of his titles with the Italian team in the 1970s and came back from severe burns in a fiery near-fatal 1976 crash, on their cars.

McLaren, with whom the Austrian won his third title in 1984, said they would have something on their cars too.

Photographs and television footage of Lauda’s famous 1976 duel with rival and eventual champion James Hunt were being played constantly on screens in the Ferrari and Mercedes hospitality units.

British rookie George Russell, a Mercedes-backed driver who was the team’s official reserve until securing a race seat with Williams, recalled how he and Lauda used to watch MotoGP races together.

“He just loved everything racing really,” he said.

“I remember at Silverstone when I won my first or second GP3 race and he was down at the podium with Toto and I couldn’t believe it really.

“I’d only been part of Mercedes for half a year and there’s Niki Lauda congratulating me at the podium. He was just an amazing person.”

Formula One managing director for motorsport Ross Brawn, who worked with Lauda at Mercedes in 2012, said the Austrian had been key to Hamilton’s move from McLaren, particularly in persuading the Mercedes board to part with the money.

“Niki’s loss is of huge significance to Formula One,” said the Briton. “Ours is a sport that revolves around larger than life personalities and Niki was one of racing’s most formidable characters.

“His presence in the paddock was a reminder that Formula One is a sport of heroes, an arena for competitors who push past common limits of fortitude and endurance and find an elevated plane beyond the ordinary. Simply, he was a legend.”

Teens remanded for stealing from car