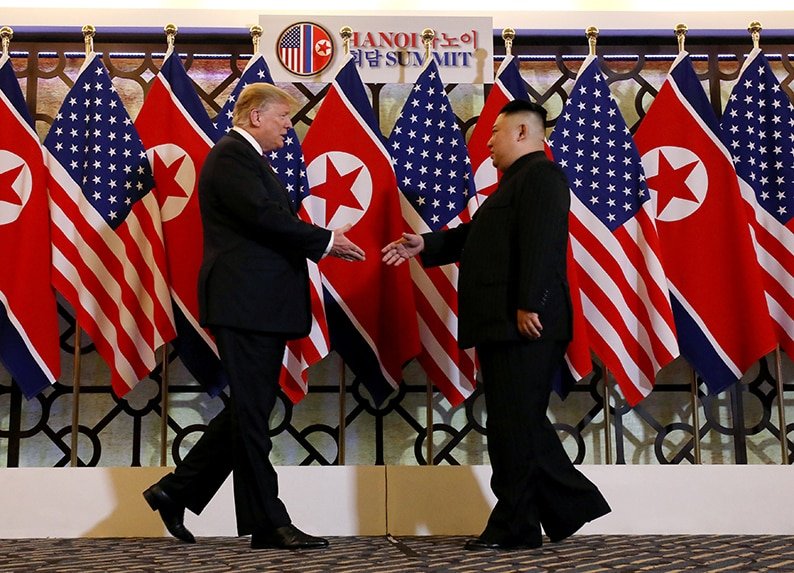 By Hyonhee Shin and David Brunnstrom

North Korea on Friday blamed an “arbitrary and dishonest” U.S. position for the failure of a recent summit between its leader Kim Jong Un and U.S. President Donald Trump and warned that stalled nuclear talks would never restart unless Washington took a new approach.

A spokesman for North Korea’s foreign ministry accused the United States of trying to shift the blame for the breakdown of the second summit between Kim and Trump, in Hanoi in February, by raising a “completely irrelevant issue”. He did not elaborate.

“The underlying cause of setback of the DPRK-U.S. summit talks in Hanoi is the arbitrary and dishonest position taken by the United States, insisting on a method which is totally impossible to get through,” the unidentified spokesman said in a statement carried by North Korea’s official KCNA news agency.

“The United States would not be able to move us even an inch with the device it is now weighing in its mind, and the further its mistrust and hostile acts towards the DPRK grow, the fiercer our reaction will be,” the official said, using the acronym for the Democratic People’s Republic of Korea, North Korea’s official name.

“Unless the United States … comes forward with a new method of calculation, the DPRK-U.S. dialogue will never be resumed and by extension, the prospect for resolving the nuclear issue will be much gloomy,” the official added.

The statement was the latest criticism of the United States since the failed summit in Vietnam and came just hours before Trump left for a state visit to Japan, where he is expected to discuss North Korea with Japanese Prime Minister Shinzo Abe.

Some analysts saw the North Korean statement as a possible harbinger of more missile tests.

“Such a bold statement is clearly a warning to America, implying that if Washington will not at least compromise to some extent, that Pyongyang will only apply more and more pressure,” said Harry Kazianis, of Washington’s Center for the National Interest think tank.

“We should not be shocked that as soon as this weekend more missiles will fly into the sky and tensions will climb with them even higher.”

Tension has mounted in recent weeks with North Korea firing short-range missiles early this month and Washington announcing the seizure of a North Korean ship suspected of illicit coal shipments in breach of sanctions.

In Hanoi, Kim had sought relief from punishing sanctions in return for the partial dismantling of North Korea’s nuclear programme, while Trump called for a full roadmap for denuclearisation, including the transfer of North Korea’s missiles and bombs to the United States.

The North Korean statement said the United States “pushed the talks to a rupture by merely claiming the unilateral disarmament of the DPRK.”

U.S. officials, including secretary of State Mike Pompeo, have insisted that dialogue has continued with North Korea but there has been no sign of direct talks since the summit.

A spokesman for the U.S. State Department said Trump had made clear he remained open to negotiations and was committed to the aims of transformed U.S.-North Korea relations, building lasting peace, and complete denuclearisation.

“The United States remains ready to engage in constructive discussions with North Korea to make progress simultaneously and in parallel towards these goals and we continue to invite our counterparts for negotiations,” the spokesman said.

On Wednesday, North Korea’s ambassador to the United Nations in Geneva called the ship seizure the biggest stumbling block to improving bilateral relations and warned Washington against using the “logic of strength” against Pyongyang.

Kim has set a year-end deadline for the United States to show more flexibility, but Trump and other U.S. officials have brushed that aside, calling for Kim to take action to denuclearise.

Russian ambassador accuses Ozersay of trying to discredit him