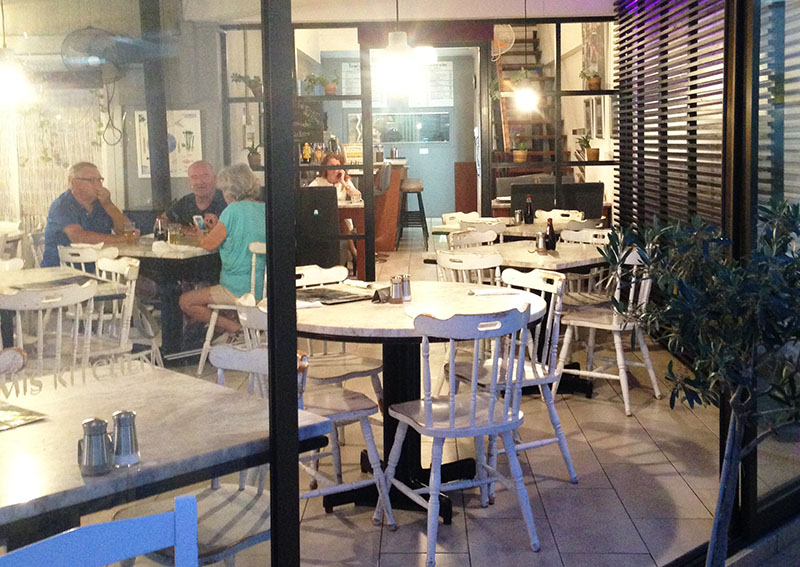 Erimi’s Kitchen has been an established name among locals and expats for as long as I can remember. Just off the highway exit at the entrance to Erimi, it’s an unassuming, casual little place, shaped almost like a glass conservatory, with white wooden chairs around marble-esque tables inside and out, and Venetian blinds lowered at varying levels over floor-to-ceiling windows.

Further in, there is a small bar on which sits a large sign letting customers know that any allergies can be catered to. Next to the bar is a large glass panel allowing a peep into the busy kitchen itself. Staffed and run by its owners, Natalia and Dimitris, there are no airs and graces here, just good, homemade tucker on offer at more than reasonable prices.

The term “homemade” is rather loosely thrown around these days, but not at Erimi’s Kitchen where you can literally see your fish fillet being freshly dipped into its batter before it’s cooked! The menu is simple: fish and chips, char-grilled meats, kebabs, burgers, pies, salads and a handful of desserts. I am dining with a close friend on this occasion and after spying another table’s enticing plates of battered seafood, we both opt for fish, chips and salad, along with water and a glass of rosé.

It’s a lovely evening and it would have been preferable to sit outside, however the wave of mosquitoes wishing to join us, changes our minds, so we are in a booth near the bar, rotating fan blowing away our hungry insect friends.

Our food arrives about twenty minutes later and doesn’t disappoint: a very, very large piece of cod encased in possibly the crispiest and lightest of batters, ensuring every mouthful is moist, juicy and delicious! A small portion of tartare sauce and half of a large lemon garnishes the dish. We decide to share a portion of chips which turns out to be a good move as there are quite a lot of them and it’s nice to see they are not overdone or soggy. A fresh village salad with a large chunk of feta in the centre is put on the table giving us a low-key taste sensation of both Britain and the Mediterranean. Everything is served on plain white crockery – and with a smile. It’s the perfect meal for a warm summer evening.

Although we don’t order an entrée or other accompaniments, the menu offers everything from Greek dips, falafel, mushrooms in butter, hot chicken wings and baked potatoes to mushy peas, baked beans, onion rings and spring rolls to choose from. Kebabs can be ordered traditional size or, for an extra couple of euros, extra-large! There is a considerable range of fish and seafood including haddock, calamari, scampi, prawns and salmon as well as a combination of those, with or without chips and the pies are Pukka pies. I make a mental note to come back for one of those!

Every morsel gone, we decide to have dessert, but to take it away. Options include sticky toffee pudding (a personal favourite) with custard or ice-cream, apple sponge, and pineapple fritters. Later we will discover that the pudding is a complete dish in its own right: single serve pudding topped with a generous amount of sauce, very rich but oh, so tasty!

Back at the restaurant, it seems that more people come for takeaway orders than are seated. Apparently, during the week, this is quite normal and looking at the takeaway menu, I note that the prices – as per most places – are a few euros cheaper than the restaurant menu making a takeaway from Erimi’s Kitchen an absolute steal! Credit cards are welcome and takeaway orders are advised to be rung through. During the summer, sometimes there are a few specials offered which are advertised on their facebook page.

On the walls of Erimi’s Kitchen are pictures of the restaurant years ago, which show how it’s changed over time and act as a testament to the fact it’s still here. For the many expats and locals in the know who are after that home-away-from-home homemade meal, Erimi’s Kitchen is most definitely the answer!

Polling officials told to be vigilant ahead of Euro elections